Impact of a PH dictatorship on Fil-Am empowerment

Impact of a PH dictatorship on Fil-Am empowerment 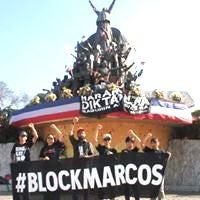 “If there is any move that will bring down the government, then the Constitution directs him, instructs him…to do something about it,” Panelo announced on October 17, 2017.

Duterte first threatened to declare a revolutionary government in a TV interview in 2015 before he even announced his presidential bid. In that interview, Duterte vowed to “padlock Congress and the judiciary through extraconstitutional means” and move on his plan to establish a federal-parliamentary type of government that would devolve powers to the regions.

“You have to close everything. It is anti-democratic, but how do you change society?” he said.

Once the revolutionary government is established, Duterte said, he would order the security forces to arrest all destabilizers and go on a full-scale war against communist rebels. “I will clear the streets and I will declare all government positions vacant,” Duterte said. The Movement Against Tyranny (MAT) denounced this proposed move by Duterte: “He wants to further dismantle whatever little is left of the systems checks and balances provided by a rubberstamp Congress, a Supreme Court dominated by his and former Pres. Arroyo’s appointees, and easily intimidated Constitutional bodies like the Office of the Ombudsman and Commission on Human Rights.”

“The same old oligarchic interests will remain, with Duterte’s family and friends as the favored cronies. The same old kowtowing to foreign interests. The same old corruption and criminality except cornered by Duterte clique, the Davao group and even the ascendant mafia in the illegal drug business,” MAT also said as it compared the move to the rule of ousted dictator Ferdinand Marcos.

Speaking at an open forum in Daly City on October 26, Opposition Sen. Antonio Trillanes said he believed Duterte would likely declare a revolutionary government as he would not be bound by the formal limitations of martial law like declaring it only in cases of an invasion or a state of rebellion and be bound by the requirement that he report to the Supreme Court and to the Congress within 48 hours his justification for the imposition of martial law.

While the Fil-Ams’ concerns about a looming Duterte dictatorship has mainly focused on its effect on their personal plans to visit the Philippines, among more politically conscious Filipinos, serious concern has been expressed about the exponential numbers of people who will be killed resisting the dictatorship and the destructive effect this political instability will wreak on the fragile Philippine economy. For the more than 5 million Filipinos in the US (officially 3.4 million in the 2010 census), there is also another question: What effect will the imposition of a dictatorship in the homeland have on the efforts of Fil-Ams to empower our community in the US?

We need only review the past to grasp a glimpse of the future.

We were all equally unempowered

Back then, there were no Chinese Americans, Japanese Americans or Filipino Americans holding elective office in San Francisco, none appointed to major city commissions, no judges of Asian ancestry presiding in courts in the Bay Area. We were all equally unempowered.

But we saw that we were making progress as we registered voters and began community organizing. Eventually, we were confident all our efforts would pay off. And they did pay off for the Chinese American community. In 1973, SF Mayor Joseph Alioto appointed George Chinn as the first Chinese American on the San Francisco Board of Supervisors. In 1977, Gordon Lau was appointed and eventually became the first elected Asian American city official. Now the city has a Chinese American mayor, Ed Lee, who was working with us in our coalition meetings back in 1971. But no Filipino Americans were elected to office in San Francisco in the 70s and 80s.

What happened? Why didn’t Filipinos figure in the empowerment mix?

Our “impossible dream” of political empowerment evaporated when martial law was declared in the Philippines in September of 1972.

Back then, the largest Fil-Am political organization was the Filipino American Political Association (FAPA) which was founded in September of 1965 after Filipino community leaders in San Francisco led by Alex Esclamado gathered canned goods, blankets and clothes and traveled in a 10-car convoy to Delano, California to support the 1,500 Filipino farmworkers there, led by Larry Itliong, who had initiated the Delano Strike of 1965.

The lesson of FAPA

FAPA rapidly grew to having 31 chapters in cities and towns all over California. FAPA fielded Fil-Am candidates for mayors and city councils in California and won in many cities like Seaside, Delano and Twentynine Palms. But in 1973, martial law opened a rift within FAPA because the mostly Ilocano farmworkers felt a kinship obligation to support the Ilocano Dictator of the country, Ferdinand Marcos. They effectively voted down any resolution condemning martial law. The kinship trumped concern for the widespread violations of civil rights. FAPA soon became moribund and died.

The political divisions within FAPA were replicated in Filipino community groups throughout the US especially where Ilocanos held leadership posts. Uniting on any issue affecting the community became impossible because supporters and opponents of Marcos and martial law would take opposite sides on any issue.

The Philippine Consulates in the US have historically functioned as the neutral arbiters of the Filipino-American communities.  The standing of Filipino community organizations and their leaders would only be established if the leaders were inducted into office by the Philippine Consul-General or a consular representative. An organization’s cache was often measured by the number of times it was invited to Philippine consular events.

When Ferdinand Marcos declared martial law in the Philippines on September 23, 1972, the nature of the Philippine consulates changed. The once proud career foreign service representatives of the Philippine government and the Filipino people were transformed to be agents and apologists of a dictatorship to serve the craven interests of the dictator in power.

The Philippine Consul-General in Los Angeles in 1972, Ruperto Baliao, was acutely aware of the nature of this change. On May 18, 1973, Consul Baliao held a press conference in L.A. to denounce Marcos as “the new Hitler”. He read his cable to Secretary of Foreign Affairs Carlos P. Romulo, where he said: “after many sleepless nights of soul-searching, I have finally decided that I cannot in good conscience continue serving your administration which is dedicated to the perpetuation of Pres. Marcos’ despotic rule and the continued suppression of our people’s civil liberties.” Consul-General Baliao also exposed a directive he had received from the Intelligence Service of the Armed Forces of the Philippines (ISAFP) to not extend or renew the Philippine passports of over 100 Filipinos in the United States whose activities the Marcos government considered “detrimental to the national interest.”

On October 21, 2017, more than 400 delegates from all over the United States gathered in Washington DC at the Marriott Hotel to celebrate the 20th anniversary of the founding of the National Federation of Filipino American Associations (NaFFAA). The federation took pride in securing passage of the provision (sponsored by Hawaii Sen. Daniel Inouye) in the 2009 Stimulus Bill signed by Pres. Barack Obama that granted more than $300 million in lump sum compensation to surviving Filipino WWII veterans.

NaFFAA has been active in registering Filipino American voters to harness the community’s political power. It has succeeded in working for the election of Filipino American officials to various state, county and city offices. I became the first Filipino to be elected to public office in San Francisco when I won a seat in the San Francisco Community College Board in 1992 and won three more times serving a total of 18 years. Another Filipino, Hydra Mendoza, was elected to the San Francisco School Board in 2006. There is a Filipino American mayor in Daly City where 4 of the 5 city council posts are held by Filipinos. A few years ago, in nearby Silicon Valley city of Milpitas, the two candidates for city mayor were both Filipinos, Joe Estevez and Henry Manayan. There have been FilAm mayors in Bay Area cities like Vallejo, Colma, Suisun City, Hercules, Emeryville and even a state assemblyman, Rob Bonta, from Alameda.

In 2010, Fil-Am Tani Gorre Cantil-Sakauye, the daughter Filipino farmworkers from Hawaii, was appointed Chief Justice of the California Supreme Court, a post she still holds with distinction.

It will happen again if or when Pres. Duterte imposes a dictatorship in the Philippines.