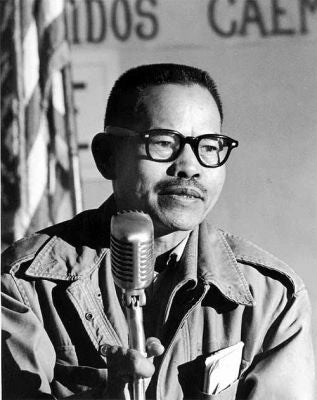 It was the spring of 1965, and in Coachella Valley, California, grape season was starting. Many of the workers in the grape fields were Filipinos, who had just discovered that they were being paid 15 cents less than former braceros (Mexican citizens who came to California to work in the fields). Braceros were making $1.40 per hour and Filipino workers were making $1.25 or less. After having their request for wage parity refused by the grape growers, the Filipino workers decided to strike on May 3, 1965. The group was led by Larry Itliong.

After 10 days, the grape growers agreed to pay the Filipinos equal wages. However, as the 1965 crop season continued, it became obvious that other growers in other parts of the state continued to pay Filipinos less than equal wages. In Delano, California, the largest table-grape producer in California, Filipino workers were reportedly earning only $1 per hour. Growers ignored their requests for equal wages.

The Filipino workers again turned to Larry Itliong. Despite threats of hunger and losing their homes, the Filipino workers, led by Itliong, voted to go on strike on September 8, 1965. And thus began the great Delano Grape Strike. The workers on strike demanded wages equal to the federal minimum wage. They suffered through violence at the growers’ hired hands and the sheriff’s department, and were thrown out of the labor camp. For a week, the Filipinos were striking alone. Since growers had a history of pitting farm workers of different ethnicities against each other, it was widely believed that the Mexican and Chicano workers would not join the strike.

The Mexican and Chicano workers were led by Cesar Chavez. Itliong called upon César Chávez and his followers to join forces with the Filipinos and strike together. The two groups combined, eventually forming the United Farm Workers of America, one of the greatest unions in the history of the nation. And the rest, they say, is history.

But up until 2015, that history has always given credit to Cesar Chavez alone for advancing the cause of the American farm labor movement, and improving farm workers’ wages and working conditions. History, it seems, had forgotten the Fil-Am hero, who, with his band of other pinoys, started it all: Larry Itliong.

On June 30, 2015, the California Governor signed into law designating October 25 every year as Larry Itliong Day. No longer will his story be known only to a few historians. Children, too, will be told about Larry Itliong, and how he helped to improve the working life of farm laborers in California. 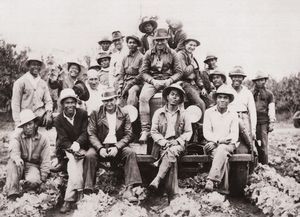 F.ilipino farm workers in California in the ’30s. FANHS

Larry Itliong, his struggles, and his legacy continue to be relevant to the workers of today, particularly immigrant workers who face similar challenges in the workplace. For example, present-day workers continue to face the realities of inequitable wages in the form of wage theft, where employers keep or take away monies that rightfully belong to their workers. Denying overtime pay, requiring employees to work off-the-clock, misclassifying workers as independent contractors or exempt to avoid overtime pay, and not providing employees with mandated meal and rest breaks are all forms of wage theft.

In honor of Larry Itliong’s courage and vision, we take a moment to be grateful for what has been accomplished, and to recognize that there is so much more to do. For our part, the struggle for employment justice continues in our courts. As lawyers, we fight for Fil-Am and other immigrant workers to obtain wages due them under the law.