New York City’s first attempt at ranked-choice voting descended into confusion on Tuesday when the reported number of votes cast in the mayoral Democratic primary suddenly surged by more than 140,000 and election officials abruptly erased results that had been posted on the official website.

The primary election to choose the next leader of America’s largest city was held a week ago, when preliminary results showed Eric Adams, the Brooklyn borough president, with a significant but not insurmountable 10-point lead in the primary.

But that lead shrank to two points on Tuesday when voters’ secondary choices were factored in under a ranked-voting system being used for the first time. Regardless of Tuesday’s developments, final results were not expected until mid-July.

Kathryn Garcia, a former sanitation chief, moved up from third place to a close second, while Maya Wiley, a former MSNBC analyst and civil rights lawyer, fell from second to third.

Adams complained of “irregularities” with the sudden surge in the number of votes cast, and the election board acknowledged a discrepancy that it would investigate, asking the public and the campaigns for patience.

“We are aware there is a discrepancy in the unofficial RCV round by round elimination report. We are working with our RCV technical staff to identify where the discrepancy occurred,” the board said on Twitter.

We are aware there is a discrepancy in the unofficial RCV round by round elimination report. We are working with our RCV technical staff to identify where the discrepancy occurred. We ask the public, elected officials and candidates to have patience.

Then without notice or explanation, the board replaced the tally with a note saying the results would be available on Wednesday. Board of Elections officials could not be reached for comment late Tuesday.

The Adams campaign was waiting to hear from the board on what had happened, according to a spokesperson.

Whoever emerges as the winner of the Democratic primary will be a heavy favorite in November’s general election in a city where Democrats outnumber Republicans six to one.

The ranked-choice system operates as a series of instant runoffs. The candidate in last place is eliminated, and his or her votes are redistributed to voters’ second choice. The process repeats until there are only two candidates remaining, and the one with a majority is declared the winner. 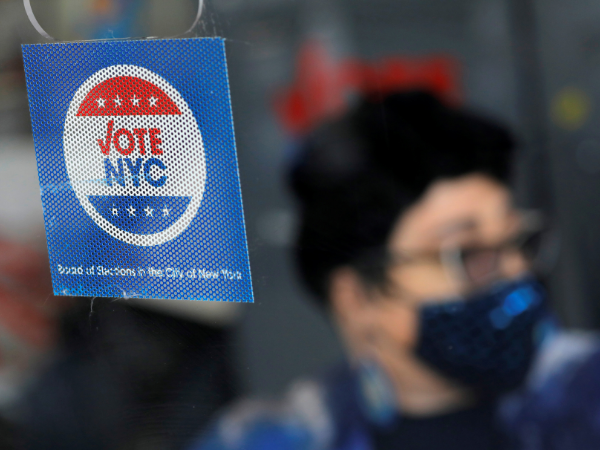 Last week, Adams had 32% of first-choice ballots, based on the incomplete results released on Election Day. Wiley was at 22%, and Garcia stood in third at 19%.

Andrew Yang, the former presidential candidate, was in a distant fourth place and conceded on election night.

Neither number includes the approximately 125,000 absentee ballots that have been received. Once counted, those could easily alter the final results.

Election officials plan to rerun the ranked-choice voting tabulation next week, this time with at least some absentee ballots included.

The Democratic winner will face Republican nominee Curtis Sliwa, the founder of the Guardian Angels civilian patrol group, in the November general election.

Public safety dominated the campaign, providing an early look at how Democrats nationally might approach the issue of policing ahead of next year’s congressional midterm elections.

While many of his rivals called for police reform or funding cuts after national protests against racism in 2020, Adams, a former police officer, vowed to reinforce police departments.