Brooklyn Borough President Eric Adams, a former police captain who put public safety at the center of his campaign for New York City mayor, was leading a field of 13 Democratic candidates in Tuesday’s primary election, though the outcome likely won’t be known for weeks.

With 90% of the in-person votes counted, Adams had been picked as the top choice on 31% of ballots. But with at least 87,000 absentee ballots yet to be processed, and a new ranked-choice voting system in place, final results are not expected until mid-July at the earliest.

In remarks to supporters, Adams acknowledged the campaign was far from over.

“But there’s something else we know: that New York City said ‘Our first choice is Eric Adams’,” he said.

The winner of Tuesday’s Democratic contest to succeed term-limited Mayor Bill de Blasio will be an overwhelming favorite in November’s general election, given the city’s heavily Democratic lean.

Tuesday’s totals were enough to force a concession from former presidential candidate Andrew Yang, who was in a distant fourth place. 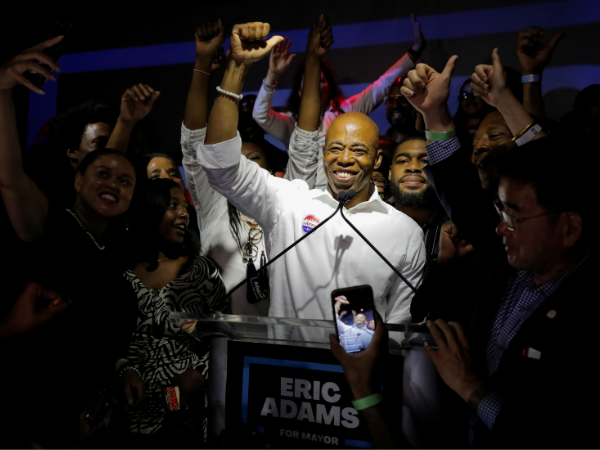 Speaking to supporters less than two hours after polls closed, Yang, an entrepreneur whose surprisingly durable presidential run made him a national figure, said the vote count made it clear he could not prevail.

“I am a numbers guy,” said Yang, once seen as the front-runner. “And I am not going to be the next mayor of New York City based on upon the numbers that have come in tonight.”

The race appeared to have narrowed to a trio of candidates, all vying for the chance to lead the country’s most populous city in its arduous recovery from the coronavirus pandemic. Maya Wiley, the former MSNBC analyst and civil rights lawyer who emerged as the leading liberal candidate, was in second place with 22%. Kathryn Garcia, a former sanitation chief who campaigned as an experienced technocrat, was at 20%.

The primary contest is the city’s first mayoral campaign to use ranked-choice voting, in which voters can rank up to five candidates in order of preference.

Tuesday’s results only reflected the top choices for voters who cast ballots in person. The next mayor will confront deep challenges, including wealth inequality, police accountability, a lack of affordable housing and a struggling tourism industry.

The unusually fluid campaign was dominated by the issue of crime, as the city confronts a surge in shootings amid an ongoing national debate over policing. The election’s outcome could help show where Democratic voters stand on the topic ahead of the 2022 midterm elections.

Wiley, by contrast, proposed cutting $1 billion from the nearly $6 billion New York police budget, redirecting the funding instead to other services, such as mental health counseling.

Curtis Sliwa, the founder of the Guardian Angels civilian patrol group, appeared to have won the Republican primary against businessman Fernando Mateo.

The new system of ranked-choice voting operates as a series of instant runoffs. With no candidate exceeding 50% among first-choice ballots, the candidate in last place will be eliminated, and his or her votes redistributed to the voters’ second choices.

The process will repeat until there are only two candidates left, and the winner is the one with a majority of ballots. 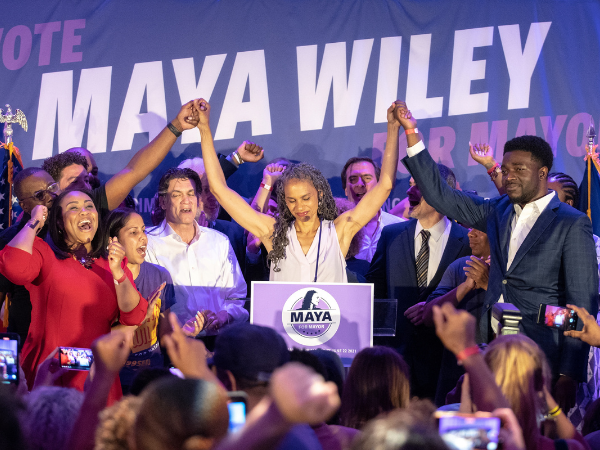 The Board of Elections intends to announce the first round of ranked-choice results from its tabulation of in-person votes on June 29 and plans to release a second round that includes some absentee ballots a week later. Final results are expected the week of July 12, after the deadline for voters to fix, or “cure,” deficient ballots has passed.

At a polling station in Brooklyn’s Fort Greene neighborhood, voters generally welcomed the new system, though some conceded they felt pressure to do more homework than usual to reach five choices.

“Once you sit and down and read everything, then it’s actually pretty easy,” said Meg Vasu, a 30-year-old attorney.

She ranked Wiley first after coming away impressed by her performance in the mayoral debates.

“I felt that she was the best progressive choice,” Vasu said.

Michael Hartman, a 41-year-old lawyer, said he ranked Garcia first, in part based on endorsements by the New York Times and the New York Daily News.

“I think she is the most competent candidate,” he said. “She has tremendous depth of experience.”

Like some other voters, he approached his ballot strategically, ranking Wiley but leaving off Adams and Yang, whom he disliked as candidates.