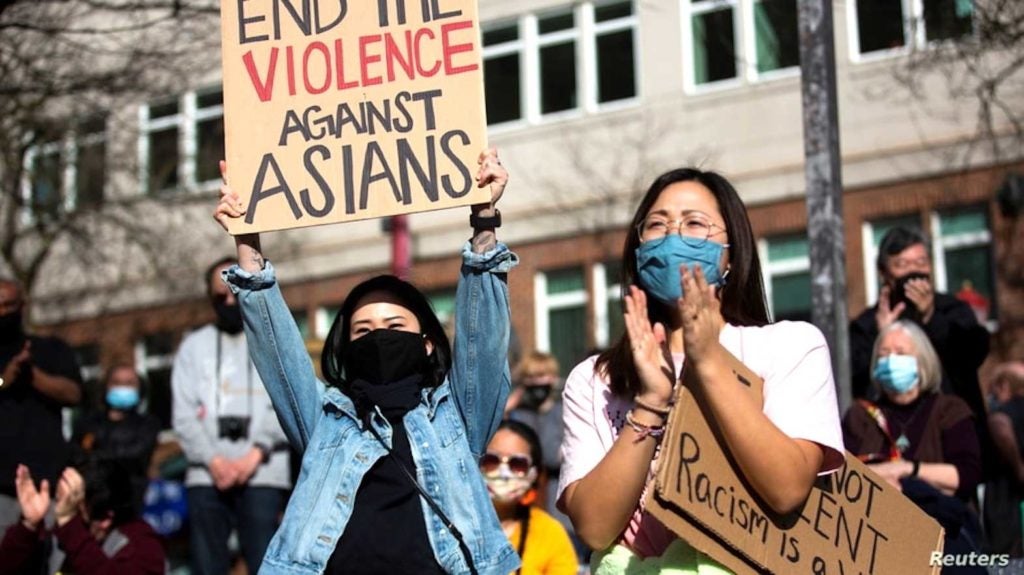 Demonstrators cheer while listening to speakers during a protest against anti-Asian hate crimes at Hing Hay Park in the Chinatown-International District of Seattle, Washington, March 13, 2021. REUTERS

Despite social media-generated impressions that anti-Asian violence is committed mostly by Blacks, the majority of attackers are white, according to a new analysis.

Janelle Wong, a professor of American Studies at the University of Maryland, College Park, released analysis last week, based on official crime statistics and other studies, showing more than three-quarters of offenders of anti-Asian hate crimes and incidents, previous to and during the pandemic, have been white.

Wong told NBC Asian America that “the way that the media is covering and the way that people are understanding anti-Asian hate at this moment, in some ways, draws attention to these long-standing anti-Asian biases in U.S. society,” Wong said. “But the racist kind of tropes that come along with it — especially that it’s predominantly Black people attacking Asian Americans who are elderly — there’s not really an empirical basis in that.”

“This is really how crime is framed in the United States — it’s framed as the source is Black,” Wong said.

She also said that “misconceptions about who perpetrates anti-Asian hate incidents can have “long-term consequences for racial solidarity.”

For a year and a half, Wong examined nine sources and four types of data about anti-Asian hate incidents, including from the reporting forum Stop AAPI Hate, Pew Research, as well as official law enforcement data.

A misreading of a frequently cited study from this year, published in the American Journal of Criminal Justice, likely contributed to the spread of erroneous impressions, Wong said.

Other studies confirm Wong’s findings. The University of Michigan Virulent Hate Project found that more than 75 percent of news stories identified perpetrators of physical or verbal assault as male and when the race of the perpetrator was confirmed.

Karthick Ramakrishnan, founder of AAPI Data, for which Wong also works, said that the public’s perception of perpetrators and victims is largely formed by the images from videos that have gone viral. But most security videos tend to be from low-income areas where there is more surveillance than in better-off areas, creating a lopsided impression, he said.