Photojournalists ‘emotionally torn’ by their pictures of EJK victims

Photojournalists ‘emotionally torn’ by their pictures of EJK victims 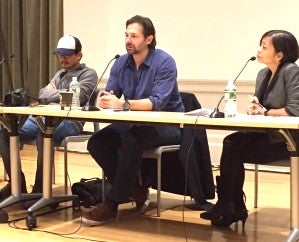 NEW YORK — Exposure to bullet-riddled and tortured bodies has overwhelmed photojournalists who have covered Rodrigo Duterte’s war on drugs, describing the trauma as similar to PTSD.

Pulitzer Award-winning Daniel Berehulak, who contributes to The New York Times, and freelance photographer previously with the Philippine Daily Inquirer, spoke about the stress of the coverage in a forum, “Watching the Philippines, Reporting Duterte,” at the Columbia University. Both reported receiving harassing threats.

“My Facebook and Twitter accounts were hacked,” said Berehulak, who stayed in the Philippines for 35 days in 2016 covering the government campaign against drugs for the Times. His article, “They are slaughtering us like animals,” which several contained graphic photos and his eyewitness narrative, was widely read and has been translated into Tagalog. 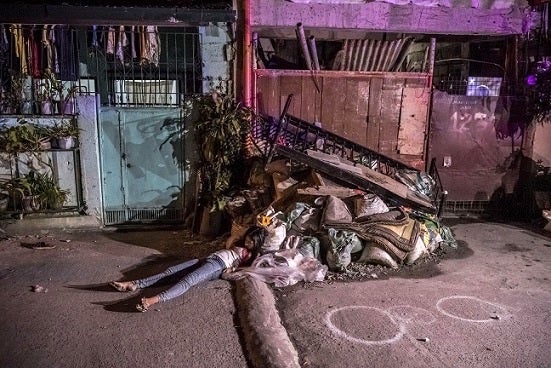 One of the photographs in Berehulak’s Pulitzer Award-winning essay, ‘They are slaughtering us like animals,’ published by The New York Times in December 2016.

The heinous anti-drug campaign has killed anywhere from 7,000 to 12,000 Filipinos, according to multiple, conflicting reports out of Manila.

“If I stayed longer than one month, it (the trauma) would have been like symptoms of PTSD (post-traumatic stress disorder),” he told The FilAm. He said the Times has offered therapy counseling if he needed it

“This is something I never experienced before,” said Berehulak, an Australian photojournalist who has been to 60 countries, such as Iraq and Afghanistan, on assignment.

“It is really important to have an outlet, to talk about what we see, what we have witnessed,” he told the forum. He said journalists are like most humans who are capable of “empathy.”

“There was a time I thought I was being desensitized (seeing) body parts that didn’t even resemble people,” he said.

On the sidelines of the forum, he told this reporter that he is planning a return to the Philippines sometime this year to visit the families of the victims and “see how the stories are changing.”

“Right now I’ve already been getting threats like, ‘we will find you, we will blow you up when you come back here,’” he said.

Asked how photographers support each other, Lerma said somewhat facetiously that drinking has been a coping mechanism, eliciting mild laughter from the audience.

He said the killings filled him with terror. He shared how he has received harassing messages on social media for his series of images showing the merciless murders of drug suspects by police and other armed men. His most riveting and probably most shared photograph is the “Pieta” showing the dead body of pedicab driver Michael Siaron being cradled by his weeping wife Jennelyn Olaires — the title inspired by the sculpture of Michelangelo. Lerma’s ‘Pieta’ image — published by the Philippine Daily Inquirer in July 2016 — was criticized by President Rodrigo Duterte in his State of the Nation Address as ‘overly dramatic.’

To Lerma, this July 2016 killing was the last straw. He took a few shots, then put down his camera “to join the survivors in mourning.”

“I felt guilty,” he told the forum, admitting how he felt the need to express solidarity with the families. Later he would see Olaires again and offered an apology. “She didn’t say anything, she just held my hand,” he said.

“Pieta” caught the attention of President Rodrigo Duterte and criticized it in his State of the nation Address as “overly dramatic.” His legions of supporters blasted the photograph as a “sensationalized” attempt to exaggerate the killings. Berehulak and Lerma stressed there was nothing stage-managed about their photographs.

Vicente Rafael, professor of History at the University of Washington in Seattle, said the photographs of the war on drugs are “brilliant, transformative, and incredibly powerful.”

He said the images are the most visible and most visceral record of Duterte’s “necropolitics” as he expressed the hope that works of art would be powerful enough to “put an end to war.”

The forum was organized by the Columbia School of Journalism. Sheila Coronel, the school’s dean of Academic Affairs, was one of the moderators.