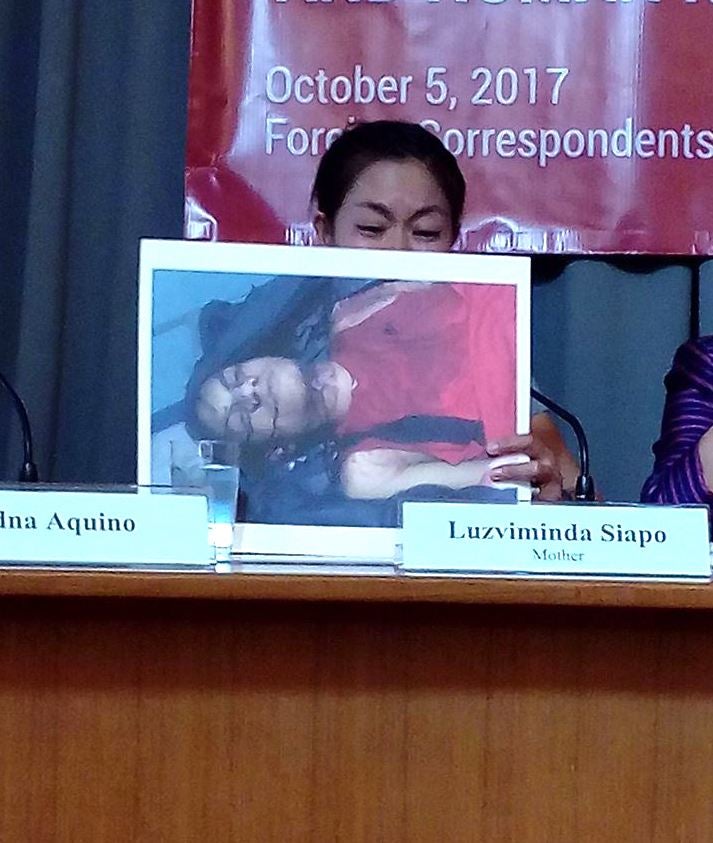 “My son could not run. He had a club foot,” Luzviminda Siapo, a former OFW in Kuwait, told over a hundred Filipinos and other foreign nationals during the Public Forum on the War on Drugs and Human Rights in the Philippines on October 5, 2017 at the Foreign Correspondent Club, Bangkok, Thailand. Raymart Siapo was a victim of extrajudicial killing.

The forum was sponsored by ANAK (Advocacy Network Against Killings). Its members are from different international organizations, NGOs and the academe who are “alarmed by the spiraling human rights crisis and political situation in the Philippines under the Duterte administration and deeply worried about the safety and welfare of their family members at home.”

I’ve read a lot about the grief of OFW mothers rushing home to see their dead kids. But hearing it personally from Luzviminda Siapo gave me chills. Like all mothers she could talk endlessly about her son. Raymart was taking a short course at TESDA on weekends. He was planning to work to help her raise his sister. Raymart was never insecure about his disability and had lots of friends.

“We used to supply textiles to malls in Manila. But when my husband died, we went bankrupt,” Luzviminda told me.

The situation prompted her to accept work as a domestic in Kuwait. Her contract was two years and could be renewable.

“I always warned him because of the spate of killings in several areas. But Raymart was never into drugs. My mother and my brother took care of them,” Luzviminda narrated. 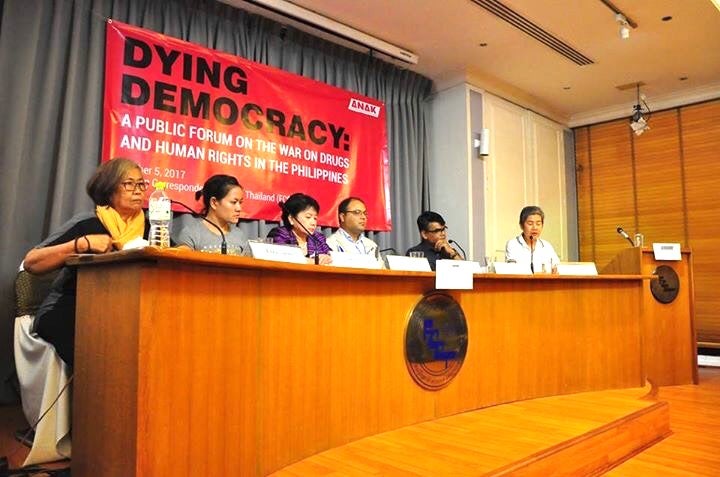 After one year and three months, Luzviminda and Raymart’s dreams were buried. And so was justice. On the night of March 29, 2017, Raymart Siapo was abducted by 14 masked men, including a barangay watchman, near his home. He was shot twice in the head and his arm was also broken. Despite having no criminal record, Raymart was reported to the Barangay by his neighbor as “marijuana peddler” after a heated argument. According to Luzviminda, that neighbor had pawned his house to her, thus Raymart and her relatives had stayed there until his death. Raymart was 19 years old.

Philippine Human Rights Commissioner Leah Tanodra-Armamento said that the victims of summary executions are mostly poor peole from slum communities. She expressed the CHR’s alarm about the similarities of Duterte’s war on drugs to the period of Martial Law when the Philippines’ national police was given power to suppress and sow terrorism among the people.

President Rodrigo Duterte admitted the possibility of abuses, yet the practice of Tokhang now called “Double Barrel Reloaded” continues. Duterte also “urges more kills,” believing that killings of addicts and pushers will reduce criminality and the ailments of Philippine society. Although there is a drug rehabilitation center funded by a Chinese businessman, it is not fully equipped and functional.

Families left behind are experiencing difficulties in coping with the losses. Luzviminda discontinued her contract in Kuwait to take care of her daughter who is traumatized. She told me that her daughter is very angry whenever she sees Duterte on TV, but she fears the policemen too.

Despite the killings in the Philippines, OFW mothers like Nelly Palpallatoc of OFW Quick Servants, a pro-Duterte group in Thailand, and Nancy Catane support the president.

Palpallatoc claims that under Duterte’s administration OFWs are given more attention compared with the previous administration. She claims that it is now easier to get financial assistance and repatriation from government agencies like DFA, OWWA, DOLE, POEA and DSWD.

Palpallatoc believes that police officers are doing their jobs. She also claims that many of the killings were done by criminals and drug pushers to “clean their own mess.”

“If we need to sacrifice one drug lord’s life just to save thousands of innocent people, I do believe God allows it,” she said.

Nancy Catane, from Mindanao, says that from her experience when she took a vacation last April in the Philippines, people feel safer. She also believes that Duterte is God-sent and that his heart belongs to the poor and the working class.

For Thai observers, what is happening in the Philippines is quite familiar. In 2003 Prime Minister Thaksin Shinawatra launched a campaign against drugs. In three months, 2,800 individuals were killed. However, an investigation in 2007 revealed that half of those killed had no links to drugs.

“Because of the popularity of the leader, harsh measures were approved by the public. This is the danger of populism,” said Dr. Sriprapha Petcharamesree of the Institute of Human Rights and Peace Studies in Mahidol University.

Knowing that she may never get justice because witnesses are afraid of reprisal, Luzviminda Siap has joined the campaign against extrajudicial killings. She brought with her photos of Raymart, young, bloodied and lifeless. She hopes that we would join her and the others to call on President Duterte to stop the killings to focus instead on the elimination of drug addiction and drug sources.

I can only cry with Luzviminda. Thousands of OFWs have left their children in the Philippines. Like Raymart, our children cannot just simply run away from bullets and false accusations.

Duterte, too, cannot run away–from his accountability. Never again should a leader be allowed to just run away. Never.