Republican Texas Governor Greg Abbott on Wednesday signed into law a “fetal heartbeat” abortion bill that bans the procedure after about six weeks of pregnancy and grants citizens the right to sue doctors who perform abortions past that point.

The new law is part of a wave of similar “heartbeat” abortion bans passed in Republican-led states. Republicans lawmakers who support such legislation have said it is intended to lead to an overturn of Roe v. Wade, the U.S. Supreme Court’s 1973 landmark ruling that guaranteed a woman’s right to end her pregnancy.

The high court this week opened the door for such an overturn, or at least a narrowing, of Roe v. Wade by agreeing to review Mississippi’s bid to ban abortions after 15 weeks.

“Our creator endowed us with the right to life, and yet millions of children lose their right to life every year because of abortion. In Texas we work to save those lives,” Abbott said before signing the bill, in a video posted on Facebook.

The “fetal heartbeat” law bans abortion once the rhythmic contracting of fetal cardiac tissue can be detected, often at six weeks – sometimes before a woman realizes she is pregnant. The Texas law makes an exception for abortions in cases of medical emergencies. 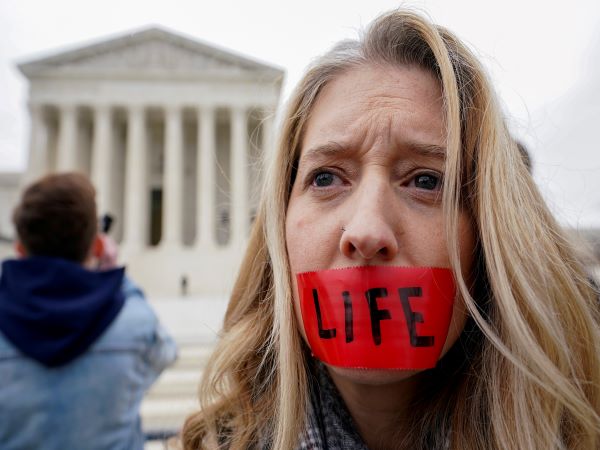 An anti-abortion activist rallies outside the U.S. Supreme Court during the the 47th annual March for Life in Washington, U.S., January 24, 2020. REUTERS/Kevin Lamarque

A fetus that is viable outside the womb, at around 24 weeks into a pregnancy, is widely considered the threshold at which abortion can be prohibited in the United States.

Nearly a dozen states have passed similar “heartbeat” abortion bans, according to reproductive health research organization the Guttmacher Institute, but none have taken effect due to legal challenges.

Abortion is one of the most divisive issues in the United States, with opponents citing religious belief to declare it immoral, and abortion rights advocates prioritizing women’s autonomy.

“It is appalling that in defiance of public opinion and public health, state politicians remain committed to controlling our bodies,” Planned Parenthood Action Fund President Alexis McGill Johnson said in a statement on Wednesday.

Texas’ law, which would take effect in September if it is not stopped by a court, allows citizens to bring a civil lawsuit against anyone who “knowingly engages in conduct that aids or abets the performance or inducement of an abortion, including paying for or reimbursing the costs of an abortion through insurance or otherwise,” if the abortion violates the provisions of the law.

In an open letter earlier this month, some 200 Texas physicians voiced concern that the bill would expose doctors to the risk of “frivolous lawsuits that threaten our ability to provide healthcare.”

“Regardless of our personal beliefs about abortion, as licensed physicians in Texas, we implore you to not weaponize the judicial branch against us to make a political point,” the letter said.

(Reporting by Gabriella BorterEditing by Chizu Nomiyama and Jonathan Oatis)