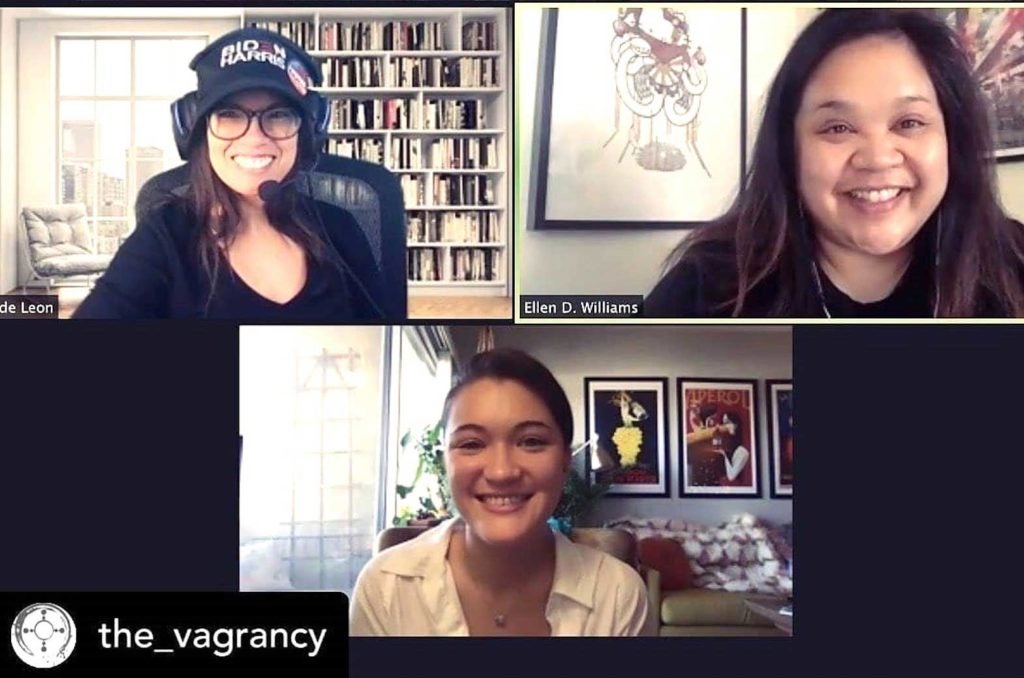 Briones recently starred opposite Patrick Stewart (playing twins) in the cast of “Picard” and was the youngest actress to be cast in the touring production of the Lin-Manuel Miranda hit musical “Hamilton,” where she played Peggy Schuyler/Maria Reynolds and understudied the Eliza Schuyler-Hamilton role. (READ about it here.)

Williams was recently in the sitcoms “Baskets” as Nicole Baskets, and “How I Met Your Mother” as Patrice.

Helming the reading is Fil-Am actor and director Fran de Leon. “What’s been really amazing about working with this team is seeing all the different facets and multiplicities of our Filipina diasporic experience across generations, and it’s wonderful how much we understand each other and the richness of memories they bring to … the play,” says Andrei.

In the play, estranged Fil-Am half-sisters Ariel and Sofia reunite in Virginia to clean out their recently deceased mother’s photographs and letters. They discover much more when they find a cassette tape seemingly recorded during martial law in the Philippines (when Ariel was born).

“Essentially, the play touches on giving birth during the pandemic in the United States and during Marcos’ declaration of martial law in the Philippines.

Andrei gave birth middle of last year. “I was reflecting over giving birth during a time of pandemic and civil upheaval—how it must be so scary for first-time moms to be birthing, what kind of world are our children being born into.

“I drew strength and inspiration from stories about my mother and grandmother and the turbulent times when they gave birth. Has it always been turbulent for us as Filipina women?”

Nevertheless, it is strength, inspiration and, ultimately, joy, that led to the germination of this play.

“The Vagrancy Writers Group put out a beautiful prompt for us … ‘tell a story inspired by the theme History Repeats Itself … provide an antidote to the current uncertainty we are all experiencing by reflecting elements of joy.’

“I feel fortunate that my Filipina American doula joined me. Because of my child’s birth, 2020 will always have a flood of joy and grace amidst everything going on.”

In addition to having just given birth, Andrei and her family also moved, forcing her to confront her own mother’s ephemera. “I had all of these boxes of my mom’s journalism archives from her time abroad.

“It’s an incredibly intimate act to go through someone’s letters. I was struck by how clearly my mom’s voice came across in the letters.

Ideas for the play came quickly to her. “I suppose because I was also thinking about how to deal with a mother’s legacy, how to mother and bring life into the world during ‘unprecedented times’ and how the Filipina can take up space, both in life and in death, and how fluid those boundaries can be.”

Andrei is also experimenting with structure with this piece. “The play has the kishotenketsu structure, an Asian four-act story shape meant not to highlight conflict, but rather disparate elements coming together in harmony.”

Prior to this production, Andrei’s “Culture Night” had a staged reading online for Echo Theater Company helmed by Fil-Am director Daniella Wheelock with an all-Fil-Am cast.

The Vagrancy will release recordings of the staged readings every Tuesday May 25 to June 29 with livestreamed talkback sessions on its YouTube channel.

Meanwhile, after this production, Andrei will prepare for a production of her Fil-Am adaptation of Euripides’ “Hecuba” and one more play scheduled for the end of the year with an LA theater group that will feature Filipino and Fil-Am themes.