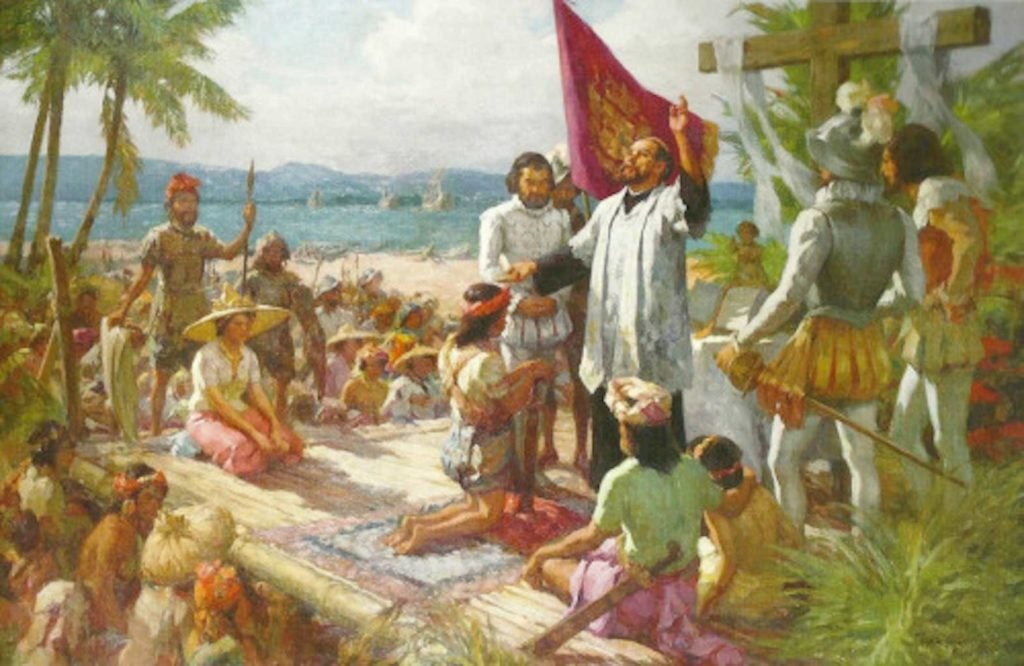 National Artist Fernando Amorsolo’s painting of the first baptism in the Philippines on April 14, 1521.

In 1521, Fr. Pedro de Valderrama, Enrique, and the all-Christian crew of the Magellan expedition, arrived and celebrated the first Holy Mass in Limasawa, planted the Cross in Cebu, shared the first catechetical instruction, and administered the first Baptism to more than 2,000 of our ancestors. In other words, in 1521, they came and planted the seed of Christianity.

From April 27 to May 2, 1965, Archbishop Julio Rosales led the week-long national celebration in Cebu graced by President Diosdado Macapagal, Apostolic Delegate to the United States Egmidio Vagnozzi and Bishop Fulton Sheen, who was known for his TV and radio evangelization.

Why Cebu? Because it was there, at Fort San Pedro, where Miguel López de Legazpi docked his ships on April 27, 1565. Legazpi himself wrote several letters to Felipe II of Spain about this and his subsequent conquests of the islands (Cartas al Rey Don Felipe II: sobre la expedición, conquistas y progresos de las islas Felipinas).

During the mammoth 1965 preparation, the Filipino Church and the State were one and united like human dancing feet in God’s dancing shoes. In 1964, President Diosdado Macapagal penned  the Administrative Order No. 98 and created a steering committee as a show of active participation on the part of the government. He was so unlike Duterte who ridiculed the Filipino Church as the “most hypocritical institution,” and rebuked the celebration of 500 YOC.

The Filipino bishops declared 1965 a Jubilee Year and established what we know today as Mission Society of the Philippines or MSP. In a pastoral statement that year with the title “Formation of our Foreign Mission Society,” the bishops disclose: “Simultaneous with the Fourth Centennial Celebration of our Birth as a Christian Nation in 1965, we will found this Society and lay the cornerstone of its seminary in Cebu.”

By that singular episcopal act, in 1965, the Philippines has officially ceased being a mission territory for foreigners and began being a territory of missionaries to foreign lands. Coming of age, the Filipino Church in 1965 assumed an awesome commitment to humankind ad extra and ad gentes, that is, to share to other nations the Faith we, the Filipino people, have so bountifully received. It was in fact the first “Gifted-to-Give” event.

So what we observed in 1965 was this: The formal Christian evangelization of our ancestors that began in 1565, so much so that by 1605, forty years after 1565, Catholic Filipinos became the vast majority of the total population. History professor at Yale University, Edward Gaylord Bourne (1860-1908), did a thorough study of the Philippine antiquity and summarized his findings in the following: “By 1605, thanks to the missionary zeal of Spanish Augustinians, Dominicans, Franciscans, and Jesuits… since that date the Filipinos have been overwhelmingly Catholic in numbers, and they remain so today.”

Given this, what then is the significance of the 2021 celebrations? Is it 500 YOC?