Police fired tear gas and rubber bullets as angry protests erupted in a Minneapolis suburb after a 20-year-old Black man was shot dead during a traffic stop.

The unrest in Brooklyn Center came hours before the trial of Derek Chauvin, the former Minneapolis police officer charged with murdering George Floyd, was set to resume in a courtroom less than 10 miles (16 km) away on Monday. 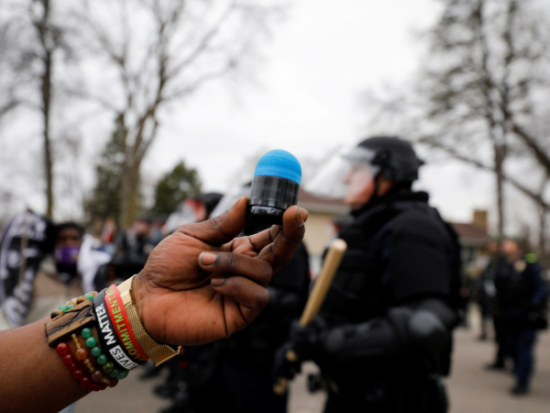 Cortez Rice holds up the rubber bullet that hit him in his side during a confrontation with police after police allegedly shot and killed a man, who local media report is identified by the victim’s mother as Daunte Wright, in Brooklyn Center, Minnesota, U.S., April 11, 2021. REUTERS/Nick Pfosi

Outside of the Brooklyn Center Police Department on Sunday night, smoke billowed as a line of police officers fired rubber bullets and chemical agents at protesters, some of whom lobbed rocks, bags of garbage and water bottles at the police.

Brooklyn Center’s mayor ordered a curfew until 6 a.m. (1100 GMT), and the local school superintendent said the district would move to remote learning on Monday “out of an abundance of caution.”

The man killed by police was identified by relatives and Minnesota Governor Tim Walz as Daunte Wright, 20. Walz said in a statement that he was monitoring the unrest as “our state mourns another life of a Black man taken by law enforcement.”

Late Sunday, a group of about 100 to 200 protesters gathered around the Brooklyn Center police headquarters and threw projectiles at the police department, Commissioner John Harrington of the Minnesota Department of Public Safety said in a live-streamed news briefing. The group was later dispersed. 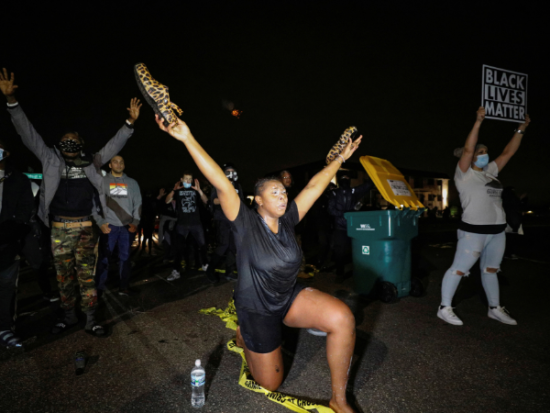 A woman who was tear gassed while confronting police raises her arms outside Brooklyn Center Police Department after police allegedly shot and killed a man, who local media report is identified by the victim’s mother as Daunte Wright, in Brooklyn Center, Minnesota, U.S., April 11, 2021. REUTERS/Nick Pfosi

Another pocket of protesters broke into about twenty businesses at a regional shopping center, with some businesses looted, according to the police and local media reports.

Anti-police protesters have already spent recent days rallying in Minneapolis as the trial of Chauvin, a white former city policeman, enters its third week in a courthouse ringed with barriers and soldiers from the National Guard.

Chauvin is charged with murder and manslaughter for kneeling on the neck of Floyd, a 46-year-old Black man, who was handcuffed during the deadly arrest last May, video of which sparked global protests against police brutality.

Brooklyn Center Mayor Mike Elliott said: “We want to make sure everyone is safe. Please be safe and please go home,” he said in a tweet addressed to protestors.

While the incident is being investigated “we continue to ask that members of our community gathering do so peacefully, amid our calls for transparency and accountability,” he added later. 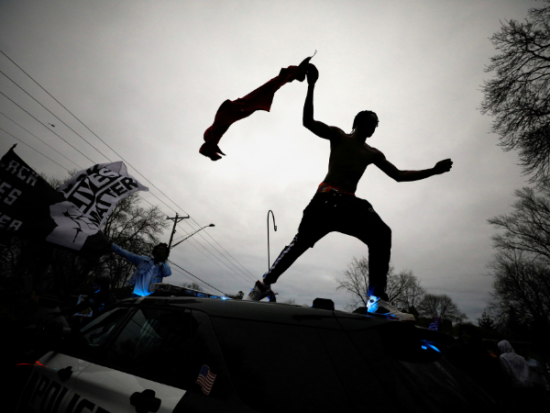 A demonstrator jumps off a police cruiser during a protest after police allegedly shot and killed a man, who local media report is identified by the victim’s mother as Daunte Wright, in Brooklyn Center, Minnesota, U.S., April 11, 2021. REUTERS/Nick Pfosi

Wright’s mother, Katie Wright, told reporters at the scene that she had received a call from her son on Sunday afternoon telling her that police had pulled him over for having air fresheners dangling from his rear-view mirror, illegal in Minnesota. She could hear police tell her son to get out the vehicle, she said.

“I heard scuffling, and I heard police officers say, ‘Daunte, don’t run,'” she said through tears. The call ended. When she dialed his number again, his girlfriend answered and said he was dead in the driver’s seat.

In a statement, Brooklyn Center police said officers pulled over a man for a traffic violation just before 2 p.m., and found he had an outstanding arrest warrant.

As police tried to arrest him, he got back in the car. One officer shot the man, who was not identified in the statement. The man drove several blocks before striking another vehicle and dying at the scene.

Police say both officers’ body cameras were recording during the incident. The state’s Bureau of Criminal Apprehension said it was investigating the shooting.

The Minnesota branch of the American Civil Liberties Union said another independent agency should investigate, and demanded the immediate release of any videos of the shooting. The group said it had “deep concerns that police here appear to have used dangling air fresheners as an excuse for making a pretextual stop, something police do all too often to target Black people.”

Near the site of the shooting, protesters yelled angrily at a line of police in riot gear holding long batons. Some protesters vandalized two police vehicles, pelting them with stones and jumping on them.

Police fired rubber bullets, hitting at least two in the crowd and leaving at least one man bleeding from the head, a Reuters witness said, before crowds marched to the department building.