However, he didn’t really need to take a glance to know that things were going exceedingly well against undefeated Gonzaga.

“I knew at some point we were up big because we were scoring and they weren’t scoring,” Butler said. “It was electrifying. Everybody stepped up. We were clicking on all cylinders.” 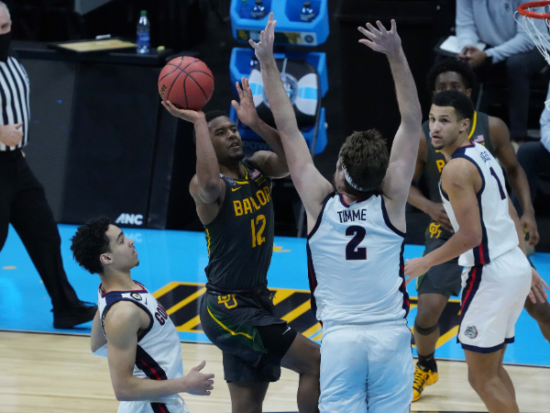 Butler made four 3-pointers and recorded 22 points and seven assists as Baylor turned Gonzaga’s perfect-season dream into a nightmare with a wire-to-wire, 86-70 victory at Indianapolis.

MaCio Teague added 19 points as the Bears (28-2) won their first national title by prevailing in the battle of No. 1 seeds. Davion Mitchell contributed 15 points, six rebounds and five assists, and Adam Flagler scored 13 points for Baylor.

Jalen Suggs scored 22 points for Gonzaga (31-1), which had its 35-game winning streak halted. The Bulldogs were attempting to become the first undefeated national champions since Indiana in 1975-76.

Drew Timme and Corey Kispert added 12 points apiece for Gonzaga, which trailed by as many as 20 points while losing for the first time since a 91-78 defeat at BYU on Feb. 22, 2020.

“You really do forget what it is like to lose,” Kispert said. “But when you go up against a team like that who is just firing on all cylinders for 40 minutes, it’s really hard to compete with.

“So you kind of forget and it doesn’t feel good. I’m going to remember this for a long time.”

Butler, who was named Most Outstanding Player of the Final Four, and his teammates have led Baylor to unprecedented heights. 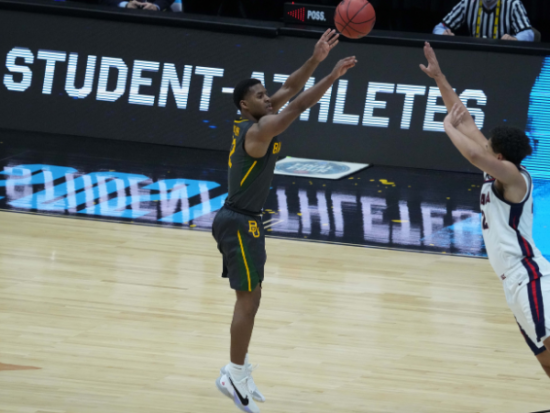 Baylor Bears guard Jared Butler (12) shoots the ball against the Gonzaga Bulldogs in the second half during the national championship game in the Final Four of the 2021 NCAA Tournament at Lucas Oil Stadium. Mandatory Credit: Kyle Terada-USA TODAY Sports

Bears coach Scott Drew pledged the program could win a national title when he was hired 18 years ago. This despite Drew arriving in the midst of an ugly scandal in which player Patrick Dennehy was shot to death by teammate Carlton Dotson and then-coach Dave Bliss attempted to cover it up before it was exposed and he was fired.

Major violations were uncovered and the Bears were hit with heavy sanctions and went 21-53 in Drew’s first three years before things started to turn around. But he sees the path to Monday’s title as something that began when he had to fill out rosters with multiple walk-ons.

“Going into every game, being 30- or 40-point underdogs and half your team is walk-ons, you know as a coach if we can just keep it within 20 in the first half, or 10 …,” Drew said of the early years of his tenure.

Meanwhile, the Bulldogs lost in the title game for the second time in the past four NCAA Tournaments.

Gonzaga had trimmed its deficit to nine with 14:29 to play before the Bears reasserted control with a 9-2 push.

Mark Vital scored in the interior and Butler added two free throws. Timme scored on the inside for the Bulldogs, but Teague followed with a layup and Flagler drained a 3-pointer to make it 67-51 with 12:55 remaining.

More than two minutes later, Mitchell made two free throws to give Baylor the game-high, 20-point lead at 73-53.

The Bulldogs didn’t get closer than 13 the rest of the way while joining Ohio State (1961) and Indiana State (1979) as teams that lost in the championship game after entering with an unblemished record.

Gonzaga coach Mark Few said he reminded his players of what an outstanding season they put together.

“I said, you can’t go 31-0 and get to the last night and get beat and feel bad about it,” Few told CBS. “It was just an unbelievable run we’ve been on. We’ve led college basketball from start to finish …

“I said, this will pass and you have to give Baylor a ton of credit and just remember what an amazing, amazing year and what an amazing accomplishment even getting to this point is.”

Baylor made 10 of 23 from 3-point range and shot 44.8 percent overall while beating Gonzaga for the first time in six all-time meetings. The Bears held a dominating 38-22 rebounding advantage and collected 16 on the offensive boards to the Bulldogs’ five.

Vital had 11 rebounds — eight on the offensive end — for Baylor.

The Bulldogs shot 51 percent and were 5 of 17 from behind the arc.

Baylor made its only previous NCAA title-game appearance in 1948, when it lost 58-42 to Kentucky.

Teague scored 14 points and Butler added 10 as the Bears held a 47-37 halftime lead.

Over the first 6 1/2 minutes, Gonzaga looked to be stuck in a celebratory hangover from Suggs’ miraculous game-winning shot against UCLA on Saturday. The Bears scored the first nine points and sped out to a 21-6 lead.

Butler and Teague buried back-to-back 3-pointers — making Baylor 5 of 5 from long range — to increase the advantage to 29-10 just before the midway point of the half.

The Bulldogs finished the half with a 9-2 run as Anton Watson’s layup with 2.5 seconds left cut Baylor’s lead to 10.

Butler made two 3-pointers in the first 61 seconds of the second half as the Bears took a 53-39 lead.

A short time later, Andrew Nembhard drove for a layup to cut Gonzaga’s deficit to 58-49 — marking the first time the Zags trailed by single digits since it was 13-4.

Gonzaga’s Suggs and Timme joined Baylor’s Butler and Mitchell on the all-NCAA Tournament team. The other member was UCLA’s Johnny Juzang.