A Covid Holy Week in PH, a golden Fil-Am story in California

A Covid Holy Week in PH, a golden Fil-Am story in California 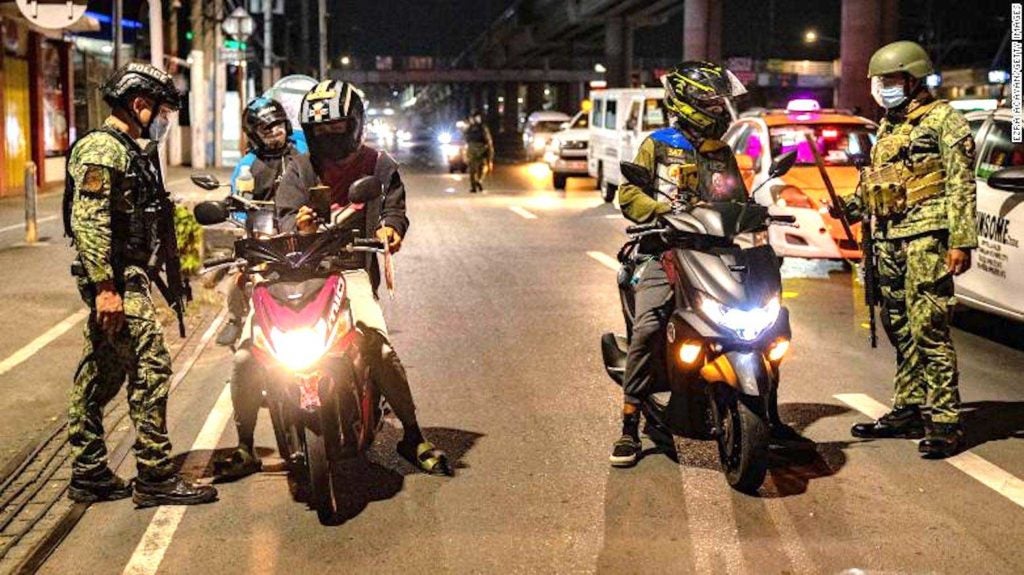 Police officers inspect motorists on March 29, 2021 at a quarantine checkpoint in Marikina, Metro Manila, Philippines, as a strict quarantine is reimposed in Manila and surrounding provinces to curb the spread of Covid-19. CNN

For Holy Week (or is it for Duterte’s birthday?)  the Philippines gets a massive lockdown, with restrictions on gatherings, and all due to COVID. It’s God’s Martial Law.

What did your local ConGen say, ”It’s better in the Philippines”?

Filipinos in the diaspora know that’s not the case, especially in the U.S. where things are opening up like a  hatched duck egg.

But it shows you what happens when people and governments doubt the science and don’t distance, or  vaccinate, or take heed.

About 100,000 deaths may have been associated with the first surge,  said Dr. Deborah Birx, one time Trump Covid team member. But more  than 400,000 additional deaths  in the U.S. could have been avoided, Birx said.

All Trump and the people had to do was take it seriously and follow the science.

So, the Philippines is learning its lesson this week with a massive lockdown. But maybe that means the guys in Pampanga who like to nail themselves and hang out on the cross get a break this year.

Filipinos in America are generally more upbeat this Easter. In my area, the restrictions are still at the highest level, even as surrounding counties open up and start acting “normally.”

Just remember 2020, when Trump was trying to keep numbers low, and modeling ignorant optimism saying it would all be over by Easter.  It was the height of ignorance.

We should have known better. Pray for the Covid dead this Holy Week. And for those in the RP, that they heed the warnings to prevent further spread of the virus.

This year, keep your flagellating to yourself. At least there’s some good news in the U.S.

Bonta is the Fil-Am leader

But since 12 years ago, when the first Filipino was finally elected to the state legislature in California, watchful eyes have been on Rob Bonta.

Good timing, I’d say. Just when the focus in the news has drifted from Atlanta to Boulder, to George Floyd,  here comes the announcement that California’s top law enforcer is one of us–an Asian American of Filipino descent.  Impeccable timing. But that has always been part of Rob Bonta’s story.

And Filipino Americans played a role in this, with community groups actively pushing for Bonta.

Several months ago, Dillon Delvo of Little Manila Rising, the grassroots social justice movement based in Stockton, Calif., alerted me to the community campaign.

It wasn’t clear if a Filipino candidate could make it. There were reports that Rep. Adam Schiff, the lead prosecutor in the first impeachment of Trump, was interested. And then there was another Asian American, Goodwin Liu, currently an associate justice on the California Supreme Court.

And who wouldn’t want to be an AG of California?

Of late, the post has become a lucky political stepping stone. The last one, Xavier Becerra, just became the first Latino to head of the Department of Health and Human Services in the Biden Cabinet. And of course, Becerra replaced Kamala Harris, who went on to the U.S. Senate and then became the first woman of color to be the nation’s vice president.

In politics, that AG spot in California is a good gig to get an even better big. One of those “first” gigs. But it was the community effort that played some role. I knew it when Delvo of Little Manila Rising, sent me a text alert. Filipinos in California were indeed rising.

So, if you heard some glass shards dropping around 2 p.m. PDT on last Wednesday, it was Governor Gavin Newsom making the official announcement that Bonta, a highly qualified Asian American of Filipino descent, had been launched into a new political orbit.

If you know Bonta’s story, you knew it was going to happen at some point. The guy’s got a golden story.

Newsom talked about how Bonta, 48, went from rural California to Yale, then Yale Law, forcing the governor to quip, “You sense the overachiever in him. I didn’t even mention the year in Oxford, uh, not my path to this podium, his is very different but a remarkable journey.”

Newsom has known Bonta for a long time from Bay Area politics (Bonta worked in the SF City Attorney’s office before he ran for office). But Newsom may not have chosen Bonta were it not for that  concerted community effort from a coalition of Filipino groups in the state, like Little Manila Rising. It didn’t hurt.

Filipinos around the country also took note of the moment.

“It’s a very big deal,” said Mona Pasquil, a veteran Filipino American politician who served as the 47th and acting lieutenant governor of the state. “He’s the top law enforcement position in the state, a constitutional office.”

Theodore S. Gonzalves, former president of the Association for Asian American Studies, put an even finer point on the history of it all.

Gonzalves recalled the words of Filipino American author Carlos Bulosan, who once wrote ‘I feel like a criminal running away from a crime I did not commit. And the crime is that I am a Filipino in America.’

“Filipinos faced horrible living and working conditions, especially during the Great Depression, when Bulosan and many others from the Philippines arrived in the United States,” said Gonzalves. “Imagine what he’d think about a Pinoy being named California’s top law enforcer. Bonta’s appointment as Attorney General is history-making. As he takes on the role, he should continue to take inspiration from generations of Filipino American activists, organizers, and workers who’ve been working for peace and justice for decades.”

All of that isn’t lost on Bonta.

After Newsom’s introduction from the podium at San Francisco’s I-Hotel/Manilatown Center, Bonta began with a sense humility.

“I stand here because of so many people who come before me,” he said.

Of course, he meant all those previous generations who paved the way for a guy like him, but he also meant his mother and father, Cynthia and Warren. His mother had been at the I-Hotel in 1977 to help organize tenants in their historic eviction battle.

But that’s just part of what I call his “golden story.” Bonta was born in the Philippines but his parents immigrated to America to escape the growing power of martial law dictator, Ferdinand Marcos.

Bonta’s family moved to California’s Central Valley, where they lived in a trailer in rural Keene, near Bakersfield, close to one of the trailers Cesar Chavez lived in. Bonta’s mom and dad were UFW organizers who worked alongside with Chavez. Bonta acknowledged that his upbringing among those involved in the farmworkers’ fight for justice sparked his dream to become a lawyer.

And now here he is, the No.1 lawyer in the biggest state with the most Asian Americans in the country.

It’s a “Si Se Puede” story with a Filipino glaze in the golden state. But his accomplishments in the last 12 years as a no-nonsense, for the people, legislator have also been noteworthy, mostly in terms of making the criminal justice system more fair for everyone.

“My fight is your fight,” Bonta said at the announcement event.

If confirmed by the state legislature (which is virtually assured), Bonta said he promised to use the power of his office, and the bully pulpit it signifies, when it comes to hate crimes against Asian Americans.

“One of the most hateful things about the hate crimes against the API community is that they had seemed to be swept under the rug. No one cared that those lives and those people weren’t valued. I valued them. I see them,” said Bonta. “The rhetoric we use as leaders is critical. Just look at what the rhetoric of the former occupant of the White House with the biggest megaphone in the planet did. It led to the murders of API people, the reductionist devaluing of Asian Americans throughout this nation is using words like ‘Kung Flu’ and ‘Wuhan Virus’ and ‘China Virus.’”

So just as the whole country is discovering its lack of knowledge about Asian Americans and our history, here comes Bonta to make some of his own.

“As we see the tragic and horrific rise in hate crimes against our API siblings throughout the nation, I can’t help but think about a photograph of a sign from a hotel lobby in 1920s Stockton that I have in my office,” Bonta said. “It says, ‘Positively No Filipinos Allowed.’ Throughout California history so many of us have felt the sting of hate and discrimination. I have. I know many of you have as well. Too many of you, Asian, Latino, Black, Native American, LGBTQ, Jewish, Muslim, Sikh, so many of us have been targeted and attacked because of who we are, where we’re from, and who we love. But that hate has not defined who we are or what we can achieve.”

If it sounds like he’s revving up his golden story for a campaign, it’s because there’s only a year before he has to think about the next election.

But as California’s AG, he’s in the political sweet spot of the day.

It reminded me a little of 2010, when then San Francisco District Attorney Kamala Harris chose to run for attorney general. Look what’s happened 11 years later.

In 11 years, Bonta will be only 59. Having been born in the Philippines may limit his options, but his future seems bright. And if he continues as he’s done in his no-nonsense way, who knows how far he could go.

That you need to be good and qualified and all that, goes without saying. But it helps to have that golden story. And a little bit of luck too.

We shall see what happens. What I noticed is that he understands that being the first Filipino American named to the Attorney General’s post isn’t just an isolated accomplishment.

He may have been able to thread the  needle, but he also knows there were countless others in the decades preceding, who were denied, but who kept fighting for social justice for Filipinos and others all throughout society.

They are the ones who paved the way, to make this moment,  so that Bonta could stand to fight for all of us.

That’s why of all the things Bonta said last week, that opening statement stuck. He said, “I stand here because of so many people who come before me.”

Look out for Rob Bonta.  For as long as the humility holds, he’s Filipino America’s golden story.

Emil Guillermo is an award-winning journalist and commentator. He writes a column for the Inquirer.net’s North American bureau. See his vlog and podcasts on www.amok.com