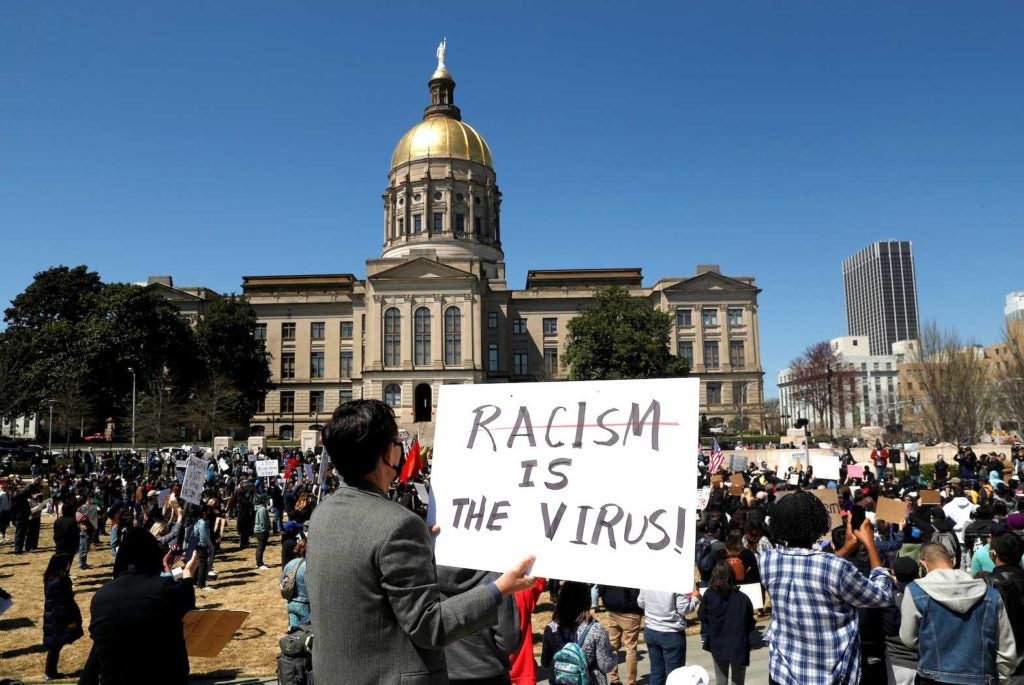 ATLANTA –  Hundreds of demonstrators gathered outside the Georgia State Capitol in Atlanta on Saturday in support of the Asian American community after a shooting at three local day spas this week left eight people dead, six of them Asian women.

The killings followed a year of mounting anti-Asian violence in the United States, which community leaders say is due to Asian Americans being blamed for the coronavirus first identified in Wuhan, China, in late 2019.

Crowds of people wearing masks, waving American flags and carrying posters that read “We are not the virus” and “Stop Asian Hate” stood in front of the golden-domed Georgia State Capitol building on Saturday.

“I want to make sure the world and the people know that I am here and I am visible,” said rally-goer Sunghee Han from Georgia.

“The women who perished, … I see my family in them,” Timothy Phan from Port St. Lucie, Florida, who drove eight hours to attend, told CNN. “I feel like far too often, we’re just erased.”

Georgia Senators Raphael Warnock and Jon Ossoff, both Democrats elected in January, led the demonstrators in a moment of silence for the victims, video on Twitter showed.

“Let us build a state and a nation where no one lives in fear because of who they are or where they or their family come from,” Senator Ossoff said.

Georgia authorities have yet to determine what drove the suspect, a 21-year-old white man, who was charged with the killings at spas in and around Atlanta on Tuesday. Robert Aaron Long told investigators sex addiction led him to violence, but lawmakers and anti-racism advocates have said anti-Asian bias could have been at least part of the motivation.

“I’m not interested in whether or not he had a bad day,” said Warnock, blasting a comment by an Atlanta-area sheriff’s department spokesman about Long’s state of mind.

“No matter how you want to spin it, the facts remain the same,” Georgia State Representative Bee Nguyen told the crowd. “This was an attack on the Asian community.”

Some of the women killed were immigrants and mothers, described by family and friends as hard-working, loving and beloved.

Hyun Jung Grant was among those killed at Gold Spa in Atlanta. Her son, Randy Park, set up a GoFundMe page to raise money for himself and his brother, who are alone now in the United States while the rest of their family is in South Korea.

“She was a single mother who dedicated her whole life to providing for my brother and I,” Park wrote.

The shootings prompted an outpouring of grief, from the local community in Georgia to the halls of U.S. Congress. Since Tuesday, mourners have piled flower bouquets and signs, lit candles and said prayers outside the spas where the victims were killed.

U.S. lawmakers decried the spike in anti-Asian violence in a congressional hearing on Thursday, where Democratic Representative Grace Meng, who is of Taiwanese descent, testified that the “community is bleeding.”

On Friday, President Joe Biden and Vice President Kamala Harris met with Asian American community leaders in Georgia to express condolences and implore Americans to stand together against hate.

MEANWHILE, in New York, another attack on an Asian has occurred. The New York Daily News reported:

A 68-year-old man punched in the face by a stranger on a Tribeca subway train, leaving him in critical condition, was the latest victim of anti-Asian hate, a good Samaritan who helped the victim told the New York Daily News.

The victim was minding his business riding an uptown No. 1 train when the assailant, sporting a fedora, black leather jacket, pink hoodie and an elaborate gold necklace, boarded the train at the Franklin Street stop about 2:40 p.m. Friday, cops said.

“You motherf—ing Asian,” the man yelled, according to witness George Okrepkie.

Without warning, the 6-foot-2 attacker walloped the victim in the face leaving him covered in blood that dripped down his jacket. The attacker threw what appeared to be a balled up newspaper before punching the victim, Okrepkie said.

“I was in a state of shock,” said Okrepkie, 55, the CEO of AX Trading, who happened to be sitting across from the victim in the nearly empty subway car. “It’s an incredibly disgusting attack on an Asian American.