SAN FRANCISCO –  A little-known legislation would be a huge benefit to a sector of the business community that is hard-hit but in the dark about available $1.6 billion in emergency benefits waiting for them.

SB91 stresses aid to smaller property landlords who have fewer resources than the hedge funds that had cashed in on the large-scale sale by public government-sponsored mortgage enterprises in the previous decade. 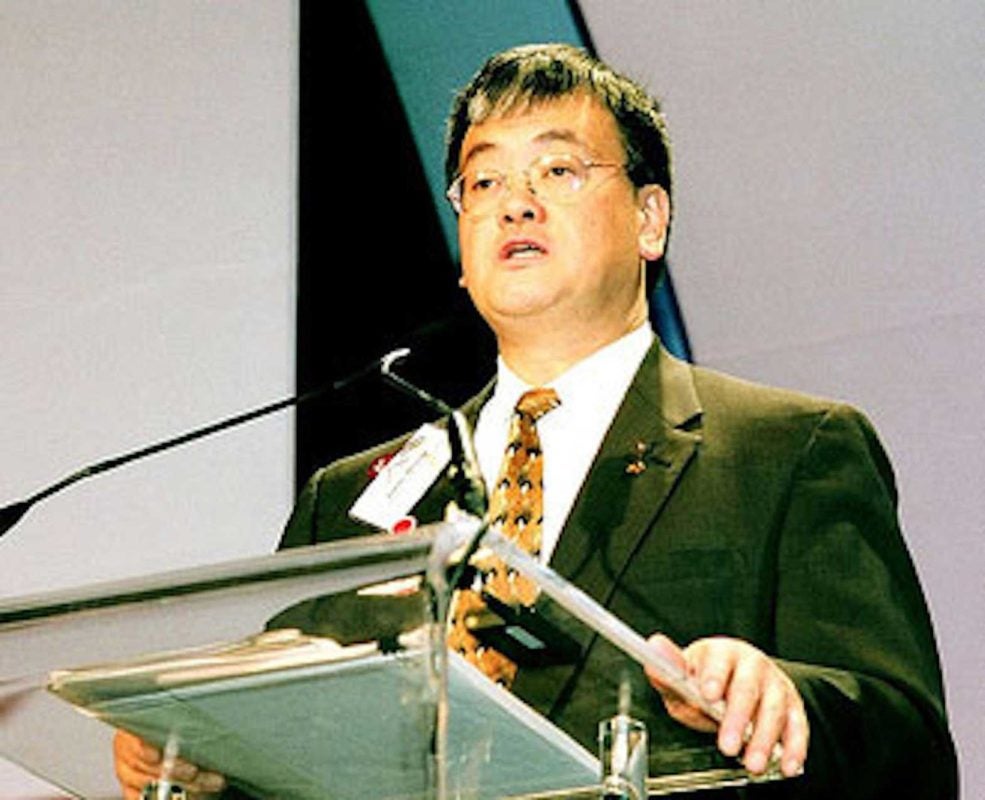 John Yen Wong urges small rental property owners to apply for over a billion offered in emergency benefits for loss of income during the pandemic.  CONTRIBUTED

Unfortunately, the bill’s existence is little known among the communities it seeks to aid, lamented John Yen Wong, founding chair of the Asian Real Estate Association of America, who spoke at a news briefing to spread the word among populations excluded from access by language and cultural barriers.

“There are funds now available,” stressed the realtor of over 60 years, who didn’t shy from expressing his objective: “I personally have heavy focus on making sure individuals who have English as not their primary language have access to information that these funds are available, that’s why this panel is particularly meaningful for me.”

“In my opinion, SB91 is the most important thing to have for smaller mom-and-pop providers and I’m happy to alert the community about it,” he said.

Wong urged mom-and-pop rental providers to act fast because “it’s usually the larger entities that may have the resources and knowledge to apply and access the money faster.”  The funds, though over a billion, he warned, “will be used up very quickly.”

Though in the shadows, “mom and pop housing providers” or independent landlords are vital, making up 77% of the country’s eight million owners of rental property from 2- or 4-unit properties, according to Sandy Close, director of Ethnic Media Services, host of the news conference March 16 here.

Close described the “struggling” sector as “the backbone of the low-rental housing market” in the nation for providing homes to the underserved, who are mostly immigrants and people of color.

When the pandemic hit, authorities poured attention on tenants by declaring a moratorium on evictions from March 2020 to January 2021.  Generally deemed as reasonable and appropriate, AB3088 helped tenants who could show their loss of livelihood due to the coronavirus, but it left small landlords without income, thereby precipitating another crisis.

The downturn threatened the relationship between mom-and-pop property owners and tenants, which historically has been “amicable,” said Wong.  Wong shed light on the common transformation of individuals from tenants to property owners to income property owners/rental housing providers as his own experience that informs his empathy for both sides of the equation.

“In the beginning there was very little awareness of the plight of the ‘housing providers’,” Wong used the term he prefers over “landlords” in assessing government response to the crisis.  “The challenge was while the property owners were unable to ask tenants to leave, they still have to pay their mortgage, insurance bills, utilities  — all the cost of keeping the properties healthy and manageable for the folks living there.”

The original bill mandated a “cooling down” period where tenants would be responsible for 25% of the rent due from September 1,  2020 by January 31, 2021 while still keeping evictions deferred if the reason for the inability to make rent was Covid-related.  The idea was that Covid would be in the rear view mirror by then.

That hope surpassed reality is now a fact with pandemic-related fatalities in this country exceeding half-million in February.

By then advocacy efforts of real estate professionals on the state and the national levels had progressed.  Wong lauded SB91’s thrust to extend the moratorium from evictions to June 30, 2021 with the added component of a rental assistance program of $1.6 billion in federal monies distributed to housing providers, with administration assigned to the California State Dept. of Housing & Community Development.

Eligibility is awarded to three tiers of households: the ones earning 50% of the area median income (which Wong calls “those in greatest need”); the ones disproportionately impacted by Covid-19 due to being situated in densely populated areas (Wong correlates the conditions common to ethnic minorities); and those earning 80% of the area median income or what Wong calls “the working segment.”

Jung Hyun Choi, Ph.D, a senior research associate with the Housing Finance Policy Center at the Urban Institute, presented data concurring that “disproportionately greater” number of people of color and with low income live in what the industry considers “small rental properties” or those comprising 1-4 or 2-4 units.  Such renters have been “disproportionately hurt” in the Covid-19 crisis, she said.  As a result, mom-and-pop landlords of color face pressure to sell property because of inability to pay mortgage.

Her research found that less than a third of tenants and less than half of landlords are aware of federal rental assistance.  Even less than those numbers actually said they were eligible, applied and received the assistance.

Those statistics were culled from Black and Hispanic respondents, however.  Choi said data on Asian, South Asian or Pacific Islander respondents was “too small,” echoing observation that said groups often decline to participate in surveys. 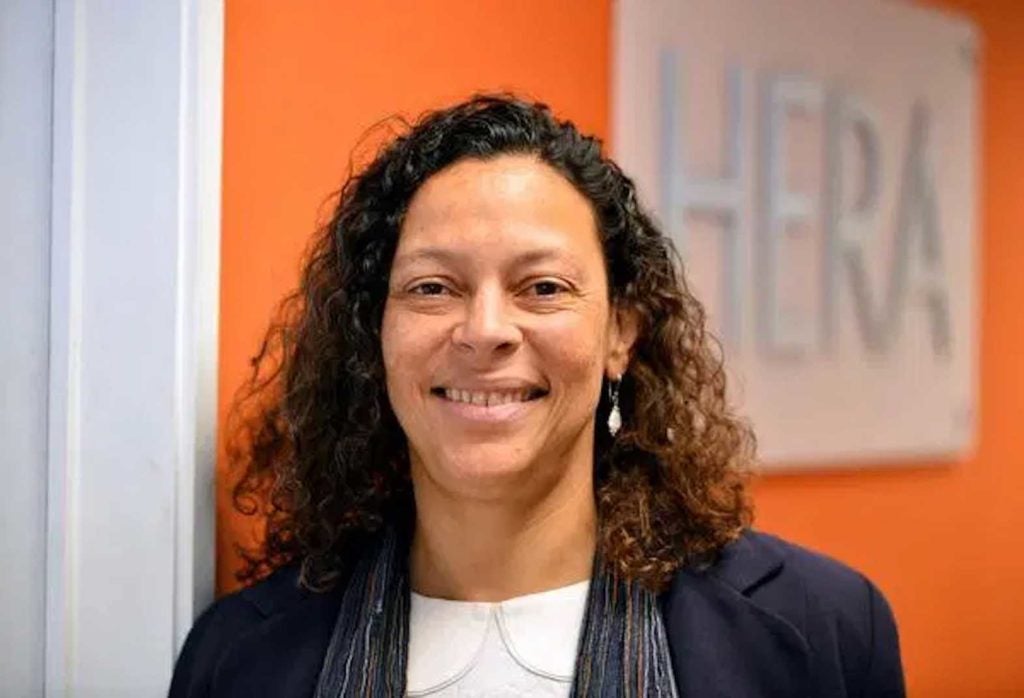 Maeve  Elise Brown of HERA urges small rental property owners to apply for over a billion offered in emergency benefits for loss of income during the pandemic.  CONTRIBUTED

Brown expressed “shock” to learn about  below-market rates consistently being charged by small housing providers who she found out are “going it alone” and have “‘never had training” about property management.

She blasted “our systemic failure to appreciate and recognize that small landlords are affordable housing providers.”

“Policymakers and most advocates don’t even think about that,” Brown chided.  “If localities and our state government recognized the truth of that… (the recognition) should have an impact in the policies they make (and distinguish) between small and large landlords.”

A consequence of the alleged failure is the “endangerment of our affordable housing stock,” which could fall in the hands of “an investor who will charge as much money as the market can possibly bear, and will be much more sophisticated at getting that done.”

She called out the lack of support system that small property owners have including accurate information to understand the current situation.

Brown emphasized that most state rental assistance programs up until this recent legislation had been tenant-driven.  That procedure that would work only if tenants and landlords have a good relationship, she said, citing an instance where inability to pay rent shames the tenant from any communication.

Self-described as a “very small landlord” Jie Wong has been there, validating Brown’s assertion of deficient support as she bewailed prospective tenants being forced out of the city to the suburbs to escape the virus.  She said she has not received any federal help and nearly has exhausted her “survival strategy.”