Grace Walker, 17, was captain of the girls’ tennis team at her Minnesota high school until the coronavirus pandemic wiped out her season.

Now her state is one of 20 across the country where lawmakers want to block transgender athletes like her from participating on high school and university sports teams that conform with their gender identity.

The wave of legislation has become another flashpoint in the U.S. culture war, with Republicans pushing back against the Biden administration’s efforts to expand transgender rights. Former President Donald Trump is among those in his party who say the laws are needed to keep the playing fields fair for women and girls.

Opponents call the measures discriminatory and say transgender athletes should be allowed every opportunity to freely compete. 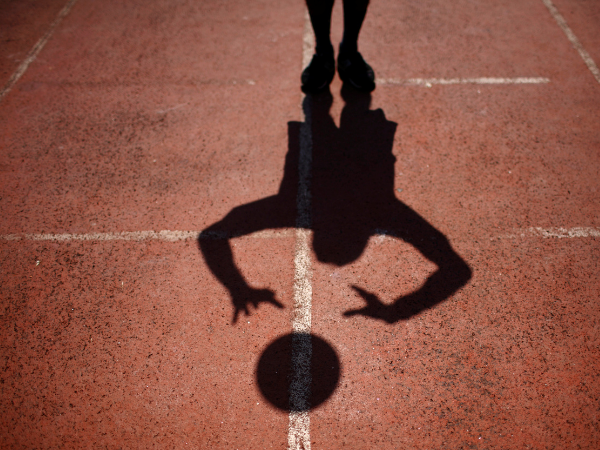 The shadow of a player is being cast on the ground while practicing volleyball during the opening ceremony of the first South Asia Lesbian, Gay, Bisexual and Transgender (LGBT) Sports Festival in Kathmandu, October 12, 2012. REUTERS/Navesh Chitrakar/File Photo

Walker, who also is a member of the cheerleading squad for the boys’ basketball team, says she is a normal teenager who wants to participate without politics getting in the way.

“I think it’s fairly silly,” she said in a Zoom interview. “This isn’t attacking what they think it is. It’s attacking kids.”

A recent Politico/Morning Consult poll found 53% of registered voters support banning transgender athletes from competing in women’s sports, versus a third who oppose such a ban.

Those pushing for the restrictions cite a handful of examples where transgender women and girls have achieved high-level athletic success. Some refer to trans women as men and use the term “biological sex,” a term transgender people find offensive because it asserts that one’s gender assigned at birth is immutable.

“Even one male entering into female competition affects all the girls in that sport. It makes the competition unfair for all of them,” said Emilie Kao, director of the Richard and Helen DeVos Center for Religion and Civil Society at The Heritage Foundation, a conservative think tank.

The sports legislation is among 73 bills filed in U.S. statehouses this year that would restrict transgender rights, said Cathryn Oakley, state legislative director for the Human Rights Campaign advocacy group.

Other bills seek to limit the medical treatment offered to transgender youth, or curb the ability to change gender markers on state identity documents.

“This is about our opponents trying to create a problem where there just isn’t one,” Oakley said. “They are looking to scapegoat trans people and specifically trans kids in an effort to score political points.”

Proponents of the legislation said it was needed after President Joe Biden, a Democrat, signed an executive order on his first day in office in January to combat discrimination against people for their gender identity or sexual orientation.

“Children should be able to learn without worrying about whether they will be denied access to the restroom, the locker room, or school sports,” Biden’s order said.

Collegiate and Olympic governing boards have rules on hormone treatments for transgender athletes, but critics say they are insufficient.

“To think that there was a biological male that could come in and essentially blow me out of the water was kind of just discouraging,” said Saltz, who was referred to Reuters by Mississippi state Senator Angela Hill, lead author of that state’s bill.

Mississippi’s law is due to take effect on July 1.

The first-of-its-kind “Fairness in Women’s Sports Act” passed last year in Idaho and was blocked by a federal judge as unconstitutional.

Saxe said the ACLU will consider suing more states if students are excluded from sports as a result of new bans.

“We are watching carefully,” Saxe said.