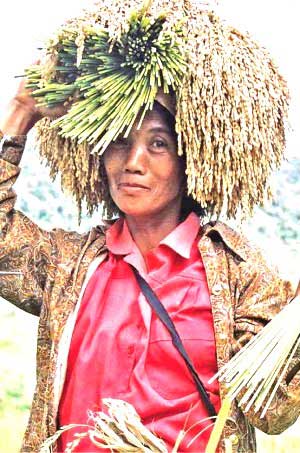 What does the future of Filipino women look like? This is something I have been thinking about for a long time.

In a world on track for a warming of more than three degrees celsius by the end of this century, the Philippines is set to suffer increasingly from disasters, deadly typhoons, droughts, flooding and much more. The Global Climate Risk Index 2015 lists the Philippines as the number one country most affected by climate change.

But why does this matter for women?

Today, climate-induced disasters in the Philippines routinely disrupt food production, resulting in food price hikes and income loss for rural workers. For example, during Typhoon Haiyan more than 600,000 hectares of farmland were destroyed, costing the Philippines an estimated PHP35 billion, or US$724 million. This loss of income is felt more heavily by rural women than men because they tend to farm smaller plots and work less hours. As a result, women may be forced to migrate to cities as they suffer from increased poverty and food insecurity.

During times of conflict and disasters, which are increasing due to climate change, women and young girls will be put in situations of increased vulnerability, which can lead to harmful coping strategies such as early marriage. It also means they are more susceptible to trafficking and sexual exploitation in exchange for food, shelter or income. This is particularly true of women from disadvantaged backgrounds and with low incomes who may be more constrained to deploy these strategies due to reduced opportunities.

Another impact caused by climate change and environmental degradation is the rising number of epidemics the world will face, such as COVID-19. What does that mean for women? In a country where there is widespread unemployment, underemployment and with women earning less, saving less, holding more insecure jobs than men, or living below or close to poverty, the economic downturns from these public health crises will hit women the most. Measures to tackle such epidemics, such as lockdowns, also lead to increases in gender-based violence against women and girls.

It is clear that for Filipino women, and those the world over, to have a better future, climate change needs to be taken more seriously. What we can do is push for the international community, and notably ASEAN member states, to respect the Paris Agreement. This starts with accelerating efforts to limit the increase of the world’s temperature and improving the ambition of their climate plans. This will also require speedily disinvesting from coal, scrapping all plans to build new coal power plants, such as in the Philippines, Indonesia, and Vietnam, and stopping our alarming rates of deforestation.

Meanwhile, aid and government programs should focus on rural as well as marginalized communities in the Philippines and integrate the specific situation and concerns of women to help populations adapt and mitigate the effects of climate change. They should focus on improving the situation of working women with low incomes, as well as poor female smallholder farmers.

As parliamentarians we can help achieve this by pushing for our governments to enhance their climate plans to the Paris Agreement—still not on track to meet its objective—and exercise our oversight function to uphold a system of checks and balances.

As citizens, we can get involved in women’s empowerment, ecological and climate justice movements to press governments to address the climate emergency, and promote and protect human rights at all times. It is imperative to continue raising our voices to demand transparency and accountability.

They will not do it on their own. Only through our collaborative efforts and active citizens’ participation will we be able to truly address the present multi-layered emergencies on climate, health, and rights, and improve the abysmal prospects of the next generation of women.