The fevers of February, Part II

The fevers of February, Part II 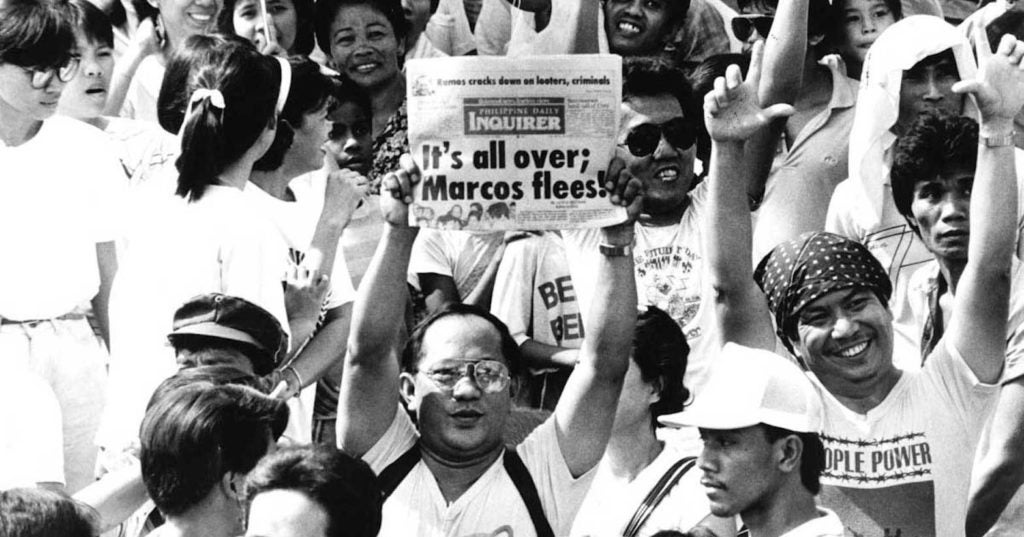 NEW YORK—The titular portrait in Nick Joaquin’s Portrait of the Artist as Filipino is a painting by the family patriarch, Don Lorenzo Marasigan, a famous but reclusive artist who, taking his cue from the Aeneid, portrays himself doubly, as a young man bearing his older version out of the ruins of what can only be Troy, a clear reference to Aeneas and his father, Anchises. Don Lorenzo hasn’t painted in quite a while, and word gets around that this last work (which could indeed be his final one) is a masterpiece and could easily fetch a handsome price.

Set in October of 1941, the characters—and their beloved city—are barely two months away from the Japanese invasion that will result in a bombed and burnt Manila, foretold by the painting/portrait of the flight of father and son from a ruined Troy. The play also portrays the lives of Paula and Candida, two spinster sisters devoted to the care of their father—and the decaying grand Antillean home in Intramuros that they cling to, even though it has become an increasing financial burden, just as Anchises is a burden on the son’s shoulders. The solution to their impecunious state? Sell their father’s painting and in one stroke banish the wolf from their door—and preserve the door as well. Their boarder Tony, a piano player at a vaudeville show and clearly representative of the American era with his brash manner, has a rich American buyer willing to buy the work for a handsome price.

The larger portrait is that of Manileños in particular and of a nation in general grown accustomed to and with its emphasis on La Via Americana, a kind of La Dolce Vita for those who can afford it. But throwing off the previous customs and traditions could result in cultural amnesia so that a society unmoored from its history will founder in its attempts at a cohesive national identity—a theme dear to Joaquin, our most lyrical chronicler of the Filipino-Hispano world. Though they may not be conscious of it, Candida, Paula, and Don Lorenzo resist this seemingly irresistible tsunami of Americanization.

The sisters’ two other siblings, Manolo and Pepang, who live elsewhere and are financially secure, harbor no longing to keep their ancestral home. They wish to sell it, and thus wittingly or not cut their ties to the world that nourished them.

How then is national identity to be forged if the past is seen as an albatross on development? Like it or not, the colonial past, including the American occupation, must be faced, incorporated—the way we were into the way we are. As the late Carmen Guerrero Nakpil once put it wittily, and I am paraphrasing here, we spent 300 years in a convent, and 50 in Hollywood. An observation that is as relevant now as it was then, to a Manila that seems to grow in a helter-skelter manner.

It is a Manila that the playwright himself loved, warts and all. Born in 1917 and raised in the arrabal of Paco, at a time when Manila was still very much a city steeped in Hispanic mores, Joaquin was fluent in Spanish, English, and Tagalog. As a journalist, his nom de plume was Quijano de Manila, an anagram of his family name, as well as an allusion to Don Quijote, a work that he admired. He was the city’s most eloquent chronicler, a tireless flaneur, who cast both a critical and loving eye on the players that strode the varied stages of our Baghdad by the Pasig. He was onstage to witness Manila’s—and the nation’s—myriad metamorphoses from Pearl of the Orient to a city in ruins, from a postwar scramble for survival to a revitalized citadel marked by the rise of Makati as the financial center.

He certainly witnessed, and wrote about, the incandescent spirit that grew out of popular outrage over the assassination of Ninoy Aquino in 1983, culminating in the 1986 People Power uprising over four glorious days in February that forced the Marcoses to hastily exit the presidential palace and the nation in disgrace. This year, in fact, marks People Power’s 35th anniversary.

What would Joaquin, who died in 2004, have thought of today’s Manila, and by extension, the country? He certainly would have seen that the revolution never happened; that the Marcoses never truly went away and are still a tumor on the body politic; that the much-touted democratic space created in the immediate aftermath of 1986 has been reclaimed, if not obliterated, by extremist right-wing forces; and that under the barbaric Duterte dispensation, the chances of dying have increased exponentially for the poor, the marginalized, and activists who in the face of brutal crackdowns, continue to speak truth to power.

But Joaquin would also have remembered the transcendent hope those February days gave rise to, and how it helped to inspire similar movements elsewhere. As slender as that hope seems nowadays, still it burns, and we need to keep that hope, that tiger, burning bright in the forests of the night. Copyright L.H. Francia 2021