A “fragile” energy grid has returned to life for frigid Texans after five days of blackouts caused by a historic winter storm, but challenges in finding drinking water and dealing with downed power lines loomed on Friday.

All power plants in the state were once again functioning, but more than 190,000 homes were still without electricity on Friday morning while 13 million people – nearly half of all Texans – have experienced disruptions in water service.

Jennifer Jordan, a 54-year old resident of Midlothian, Texas, said she and her husband were still without power on Friday, even though their online account with their provider indicated their issues had been “resolved.”

“I have no power at my house. Not one drop of power,” the high school special-education teacher said in an interview. “It’s really hard. You are really longing to get a hot shower, eat a hot meal.” 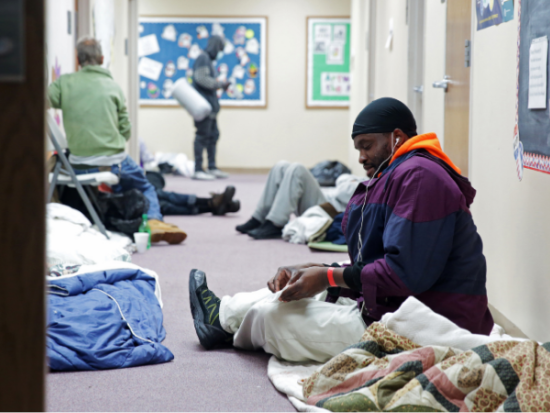 Aaron Williams gets ready to eat his meal along with many others taking shelter at a Salvation Army facility after winter weather caused electricity blackouts in Plano, Texas, U.S. February 18, 2021. REUTERS/Shelby Tauber

Ice that downed power lines during the week and other issues have utility workers scrambling to reconnect homes to power, while Texas’ powerful oil and gas sector has looked for ways to renew production.

Hospitals in some hard-hit areas ran out of water and transferred patients elsewhere, while millions of people were ordered to boil water to make it safe for drinking. Water-treatment plants were knocked offline this week, potentially allowing harmful bacteria to proliferate.

In Houston, a mass distribution of bottled water was planned at Delmar Stadium on Friday for residents needing drinkable water, the city’s Office of Emergency Management said.

Lina Hidalgo, the top elected official in Harris County, which encompasses Houston, said she was pleased with progress in the past 24 hours, but warned residents to brace for more hardship.

“The grid is still fragile,” she said, noting that cold weather would remain in the area for a few days, which would “put pressure on these power plants that have just come back on.”

Texas Governor Greg Abbott confirmed that all power-generating plants in the state were online as of Thursday afternoon. He urged lawmakers to pass legislation to ensure the energy grid was prepared for cold weather in the future.

“What happened this week to our fellow Texans is absolutely unacceptable and can never be replicated again,” Abbott told an afternoon news conference.

The governor lashed out at the Electric Reliability Council of Texas (ERCOT), a cooperative responsible for 90% of the state’s electricity, which he said had told officials before the storm that the grid was prepared for the cold weather.

ERCOT said it expected to come out of emergency conditions on Friday morning.

“There is enough generation on the electric system to allow us to begin to return to more normal operating conditions,” Dan Woodfin, the operator’s senior director of system operations, said in a statement on Friday.

The lack of power has cut off water supplies for millions, further strained hospitals’ ability to treat patients amid a pandemic, and isolated vulnerable communities, with frozen roads still impassable in parts of the state.

Nearly two dozen deaths have been attributed to the cold snap. Officials say they suspect many more people have died, but their bodies have not yet been discovered.