In the image of the GOP 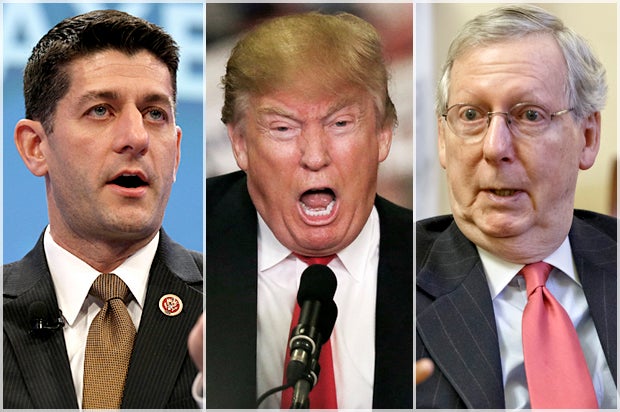 NEW YORK—If anyone still had doubts that the Orange Man in the White House is a racist, Charlottesville and his remarks immediately following the violence perpetrated by the neo-Nazis that resulted in the loss of three lives surely should have dispelled those doubts. He might have soft-pedaled these in a subsequent iteration but doubled down soon after.

And what to make of his pardon of the execrable Sheriff Joe Arpaio of Arizona, convicted of racial profiling by targeting Latinos, keeping them in what he labeled “concentration camps,” and cited for criminal contempt for defying court orders to desist? The Orange Man said the guy was just doing his job.

Really? His job as sheriff was to enforce the law, not violate it. The timing was Donald perfect: pronounced when Hurricane Harvey was about to slam into Texas, dumping about 50 inches of rain on Houston. The Orange Man does have a remarkable talent for putting his foot—no, both feet—in his mouth.

Then again, I am certain that the Donald’s most devoted followers love the comforting warmth to be found by burying their heads in the sand. I would imagine their motto is, Ignorance Is Bliss, except that they would take umbrage at being thought of as “ignorant.” OK then. Let it not be said I lack consideration for their feelings. Let’s rephrase it: Being in the dark is bliss. There: not as repugnant-sounding as “ignorant.”

These lovers of the dark may deny it, and may resist any attempt at being asked to bear a large share in the responsibility of foisting on the United States and the planet this travesty/caricature/narcissist/demented man/shallow egomaniac (take your pick, dear reader). Such recalcitrance is only reasonable. Who wants to stay on a sinking ship? Who wishes to be associated with a captain unseasoned in navigating the waters of governance?

There are, however, those in power that were fully aware of the Donald’s incompetence, the sheer magnitude of which is astounding. (Those die-hard fans should have noted that in his hometown of New York City, he was, to put mildly, viewed as a leper would have been viewed in Biblical times.) One pictures these enablers, all Republicans, as latter-day Dr. Frankensteins, creating a soulless creature who can only destroy and who now refuses to do their bidding. In a real sense, he was created in the image of the current GOP, a throwback to darker times. The creature has been let out of the laboratory, and we are paying the price.

In an excellent lengthy feature in the August issue of Vanity Fair, Sarah Ellison eviscerates the rationale behind the support the GOP stalwarts gave and continue to give the Donald. She shines the spotlight on six of them: House Speaker Paul Ryan, Senate majority leader Mitch McConnell, Vice President Mike Pence, Senators John McCain and Lindsey Graham, and former White House Chief of Staff Lance Priebus. I would make allowances for McCain, who has since bucked the Orange Man, most notably on the issue of replacing Obamacare.

Here is what Ellison says, for example, of Ryan, who was publicly critical of Trump before he won the GOP’s nod for president. “[Y]ou have a man who has said in public what he surely believes in private: that by every measure Trump is unfit for high office.” Of Senator Graham, after Ellison recounts incidents where Graham called Trump a racist, jackass, bigot and con man, she states that the senator “continues to protect Trump’s foreign-policy flank, banishing hopes of blanket rebellion.”

Ellison concludes her piece with this assessment of both the creature and the Drs. Frankenstein. Donald Trump “is a profoundly damaged human being with no true understanding of his capacities, his emotions, his ignorance, his job, or the fundamentals of human decency.” As for the six gentlemen, “they will be treated with the special contempt reserved for those who acted knowingly and cravenly, with eyes wide open.”

There are also of course the other individual enablers who helped propel the Donald to the presidency. Particularly odious are those who bought into the spurious—and racist—claim of Obama being born outside the United States. And many clung to this lie even after it was proved beyond doubt that President Obama was indeed born in the U.S.A. One can only conclude that rather than face up to the fact that a black man had an excellent chance of occupying the White House, they elected to live in a hate-filled fantasy.

Now these very enablers claim not to be racists, after all. Sure, and the Pope ain’t Catholic.