Repeal the Rescission Act of 1946

Repeal the Rescission Act of 1946 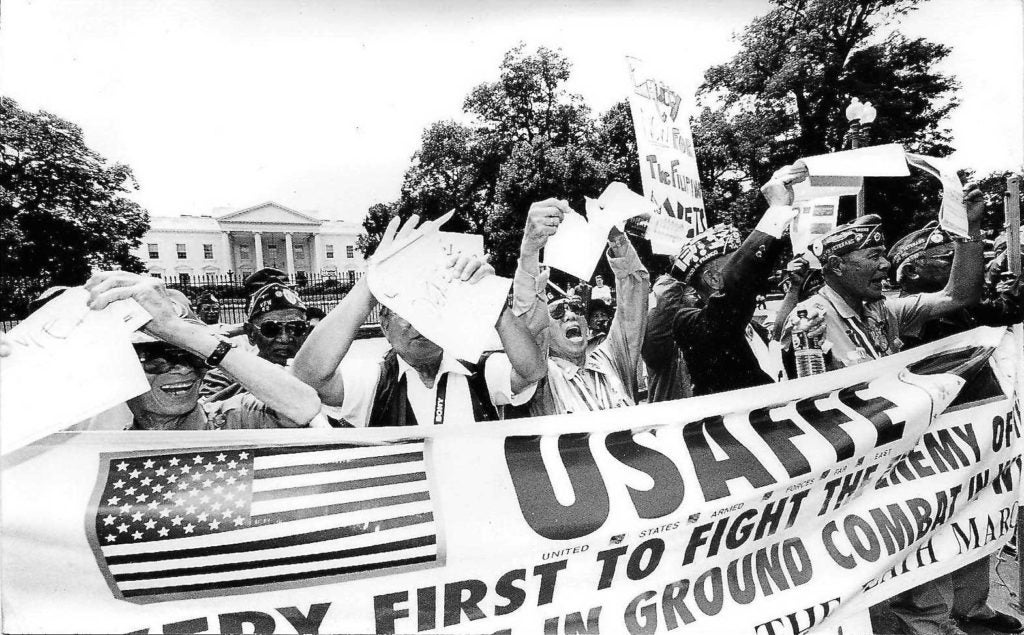 Filipino veterans of WWII and their supporters demonstrating for their war benefits in Washington, DC. PAUL I. TANEDO

Seventy-five years ago this month, after America’s victory in World War II and two months after Filipino soldiers completed their wartime service to the United States, Congress passed the first of two Rescission Acts stripping Filipino soldiers of their status as U.S. veterans and effectively denying them their rightful benefits.

This unconscionable act of Congress, which has persisted for 75 years, amounted to discrimination and injustice against thousands of Filipinos who fought, died, and wounded for life under the American flag without compensation. It is time to repeal the Rescission Act.

Although they were ordered by President Franklin D. Roosevelt on July 25, 1941 as active members of the United States Army Forces of the Far East (USAFFE), the U.S. Congress rescinded the President’s Executive Order that promised them full U.S. veterans’ benefits. Titled “The Rescission Act of 1946,” the bill provided that “service in the Commonwealth Army of the Philippines should not be deemed to have been service in the military or naval forces of the United States.”

In the view of Congress, the Philippine Commonwealth Government was to be granted independence on July 4, 1946. Thus, Filipino soldiers and recognized Guerrillas in the U.S. Army were expendable and were no longer the problem of the U.S. government.

In signing the bill into law, however, President Harry Truman made it clear that the legislation “does not release the United States from its moral obligation to provide for the heroic Philippine veterans who sacrificed so much for the common cause during the war.

But the Rescission Act of 1946 reduced the obligation of the U.S. government to take care of its Filipino war veterans. On May 22, 1946, Gen. Carlos P. Romulo, as Resident Commissioner of the Philippines, spoke on the floor of the US House of Representatives and denounced the US Congress for its “act of discrimination” against Filipinos.

From July 26, 1941 to December 31, 1946, Filipino Army soldiers and guerrillas fought and defended a sovereign territory of the United States, as part of the U.S. Armed Forces in the Far East, commanded by General Douglas MacArthur. Their courage, selfless sacrifice, and fierce determination defeated the Japanese Imperial Forces in Oct 1944, and in the liberation of the Philippines in August 1945.

During the entire Philippine War campaign, over 260,000 Filipino and American soldiers and guerrillas served. They suffered heavy losses in casualties, estimated at 57,000, in the now famous battles of Bataan and Corregidor. During the infamous Bataan Death March, about seventy thousand prisoners of war – both American and Filipino – marched 65 miles to Japanese internment camps, where they were imprisoned under inhuman conditions.

Despite the essential role Filipino soldiers played in the United States victory in the Pacific during World War II, their contributions in defending democracy and liberty were totally ignored. Instead, the U.S. government denied them one important right given to everyone else who has served in the United States Military: the right to veterans’ benefits.

Of the 66 allied nations who fought with the U.S. in World War II, only the Philippines was singled out by the Rescission Act of 1946.

Filipino soldiers are the last of veteran minority groups that suffered outright discrimination from the U.S.

African American soldiers were in segregated units led by white officers. On July 26, 1948, when President Truman signed Executive Order 9981, he directed the desegregation of the U.S. Armed Forces to repudiate 170 years of sanctioned discrimination against African American troops.

On February 19, 1942, President Franklin Roosevelt signed  Executive Order 9066 and ordered the incarceration of over  120,000 Japanese Americans who were held in 10 internment camps across the U.S. This executive order was enforced on March 21, 1942 when Roosevelt signed Public Law 503. In 1943, some 16,000 Japanese Americans or Nisei soldiers enlisted in the U.S. Army to prove their loyalty to the United States.

In 1988, the Civil Liberties Act, Public Law 100-383,  was passed by Congress that granted redress of $20,000 and a formal presidential apology to every Japanese American citizen who were incarcerated during World War II. The Nisei soldiers were awarded 21 Medals of Honor for their heroism and venerated for their uncommon courage and sacrifice in defense of their country.

Chinese Americans endured years of injustice under the Chinese Exclusion Act of 1882. In 1943, Congress repealed this statute, which allowed Chinese Americans to become U.S. citizens. Congress also allowed over 20,000 to enlist in the Army, Navy, Marines, Army Air Corps, Coast Guard, and Merchant Marines during WWII.

For the Filipinos, the Rescission Act of 1946 have taken a lasting toll of indignation and betrayal of promise made by a country they vowed to defend and were later victorious against a brutal enemy. It is beyond their time of having experienced a lifetime of racial discrimination and social injustice above their duty to serve the United States in war and not receive the same equal care and treatment granted by Congress to the African American soldiers, Japanese American soldiers, and Chinese American soldiers.

This is an insurmountable tragedy in American history. On July 22, 1998 at a Congressional Hearing, then Representative Nancy Pelosi (now Speaker of the House) stated: “I consider the Rescission Act of 1946 to be a scar on the historical record of the United States. In a time of war, we asked for and received the commitment of these Filipino soldiers to serve under the U.S. authority. While they were fighting for their country, they were also fighting for the Unites States. Having U.S. and Filipino soldiers under one centralized command structure was vital to the expeditious liberation of the Philippines and saved the lives of American lives.”

The late U.S. Senator Daniel K. Inouye (D-HI), who championed the Filipino veterans’ struggle for justice and equity, criticized the 1946 Rescission Acts for their “anti-Filipino discriminatory intent.” He said the United States “made a solemn promise, and with hardly a hearing, we revoked it. This episode is a blight upon the character of the United States, and it must be cleansed.” Throughout his long service in Congress, Sen. Inouye, along with other champions of Filipino World War II veterans, sought to repeal the Rescission Act “as a moral obligation.”

Numerous Filipino American veterans and community organization sought for years to correct this grievous injustice by seeking to win these benefits back, but with little success. In the 1990s, Congress allowed thousands to immigrate under a limited quota basis to become U.S. citizens. Funeral and burial rights came a decade later, prompting some of them to conclude that old Filipino soldiers must die first before the U.S. government can repay them for their military services. In 2009, almost 63 years later, Congress eventually granted them one-time lump sum payments as financial compensation: $15,000 each for those who are US citizens and $9,000 each for non-US citizens. Only some 18,000 were granted these payments from the 48,000 who applied for redress of their wartime service. Thousands of veterans who were denied of their compensation have died waiting for their appeals to be heard in court proceedings.

But official recognition for their service and sacrifice came more than 70 years later. On November 30, 2016, Congress passed the Filipino World War II Veterans Congressional Gold Medal Act of 2015. In remarks made during the awards ceremony on Oct. 25, 2017, Senate Democratic Leader Chuck Schumer said: “It is a mark of a confident and exceptional nation to look back on its history and say we made a grievous error, but we recognize it and pledge never to let it happen again.”

A matter of honor and dignity

But the untold story of Filipino World War II veterans remains a dark chapter in U.S. history for as long as the 1946 Rescission Act remains in the books.

“It not only deprived Filipino soldiers combat pay and their rightful benefits. It stripped them of their honor and dignity,” says Maj. Gen. Antonio Taguba (Ret), chairman of the Filipino Veterans Recognition and Education Project (FilVetREP).  “They suffered severe humiliation and the shameful betrayal by a nation whom they served with loyalty and uncommon valor. For more than 70 years, our veterans endured these racially-motivated acts, which singled them out for discrimination and unfair treatment.”

In remarks made at a memorial the day before his inauguration, President Joe Biden reminded the American people that “to heal, we must remember. It’s hard sometimes to remember, but that’s how we heal. It’s important to do that as a nation.” At his inauguration on January 20, he invited the American people to reflect on the nation’s past, again reminding them that “there’s much to repair, and much to restore.”

In calling on Congress to repeal the Rescission Act, Taguba affirms President Biden’s words with this call to action: “Let us never forget that our veterans endured a lifetime of injustice and indignation inflicted by a shameful act of Congress. It’s time we remove this ugly stain and close this dark chapter in our nation’s history.”

On behalf of the Filipino veterans who fought with valor, loyalty and duty to serve the United States alongside Americans in the Philippines during World War II, we respectfully ask Congress to act and repeal the Rescission Act of 1946, repudiate the injustice these veterans have suffered for 75 years, and heal the indignation, pain, and sorrow they endured over a lifetime.

The Filipino Veterans Recognition and Education Project (FilVetREP), is a nonpartisan,501(c)(3) tax-exempt, community-based, all-volunteer national initiative whose mission is to obtain national recognition of Filipino and American WW11 soldiers across the United States and the Philippines for their wartime service to the U.S. and the Philippines from July 26, 1941 to December 31, 1946. For more information about Filipino WWII veterans and how to get involved, visit our website at www.filvetrep.org or find us on Facebook or Twitter.