Bitcoin Vaults Above $50,000 for First Time Ever Meeting a New Record

Bitcoin Vaults Above $50,000 for First Time Ever

Bitcoin rose above $50,000 on Tuesday to a new record high, building on a rally fuelled by signs that the world’s biggest cryptocurrency is gaining acceptance amongst mainstream investors.

It also said it would accept the currency as payment. 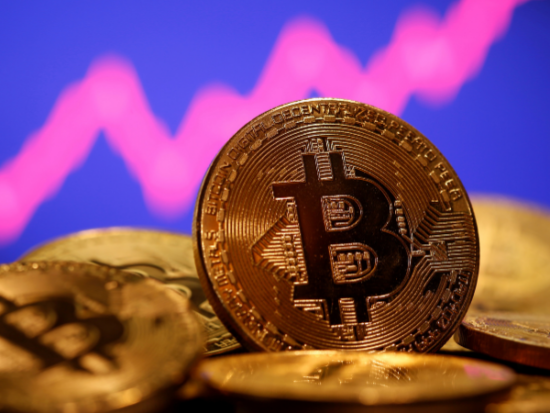 A virtual currency bitcoin representation is seen in front of a stock graph in this illustration taken January 8, 2021. REUTERS/Dado Ruvic/File Photo

But Tesla was only the latest in a string of large investments that have vaulted bitcoin from the fringes of finance to company balance sheets and Wall Street dealing desks, as U.S. firms and traditional money managers have started to buy the cryptocurrency.

“The recent market conditions and events both in the crypto space and the financial world at large put such a price movement within the realm of possibility,” said Jacob Skaaning of crypto hedge fund ARK36.

“However, I’d like to offer a word of caution: while my long-term outlook is bullish, massive price fluctuations along the way are only to be expected. Bitcoin is still extremely volatile.”

The rush in 2021 by retail and institutional investors comes on top of a 300% raise last year as investors search for alternatives to the dollar because of the U.S. Federal Reserve’s 0% interest rates. It traded at a few hundred dollars only five years earlier.

“If that narrative comes to fruition, then the growth potential is off the charts as $50,000 per bitcoin equates to a market cap of roughly $931 billion, which is almost 9% of gold,” said John Wu, president at blockchain company Ava Labs.

JPMorgan said in January that bitcoin emerged as a rival to gold and could trade as high as $146,000 if it becomes established as a safe-haven asset. That could mark a new dawn for the digital currency after years as a play for speculators and retail punters.

Bitcoin’s liquid supply continues to decrease as investors increasingly acquire and “hodl” the asset for the long term. “Hodl” is crypto slang for the act of an investor holding the asset instead of selling it. 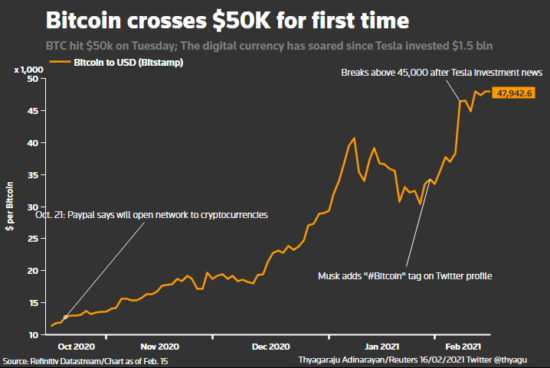