PepsiCo and Beyond Meat Partner to Develop New Plant-Based Snacks

PepsiCo and Beyond Meat Partner to Develop New Plant-Based Snacks

PepsiCo Inc and Beyond Meat Inc said that they would form a joint venture to develop and sell snacks and beverages made from plant-based protein on Tuesday.

Beyond Meat’s shares, which gained about 65% last year, were up 22.4% in premarket trading, while those of PepsiCo were up 1%.

HUGE NEWS 🎉 Beyond Meat is partnering with @PepsiCo to create #ThePLANeTpartnership. Together we’ll be developing snacks + drinks with plant-based protein; today marks an important day in our journey to build a more sustainable food system.

Plant-based meat alternatives, such as burger patties and sausages from Beyond Meat, have gained popularity in recent years as curious health-conscious consumers look to broaden or shift from chicken, pork, and beef-based diets.

Beyond Meat suffered a surprise loss in its last reported quarter as demand for its products at restaurants and grocery stores tapered after an initial surge at the start of the COVID-19 pandemic.

The new partnership with PepsiCo will give the faux meat maker access to the beverage giant’s distribution and marketing resources and allow it to expand into new product lines, Beyond Meat Chief Executive Officer Ethan Brown said.

Apart from its namesake soda, PepsiCo owns the Lays, Quaker, and Gatorade brands and has also been looking to expand its health-focused snacks and beverages portfolio. 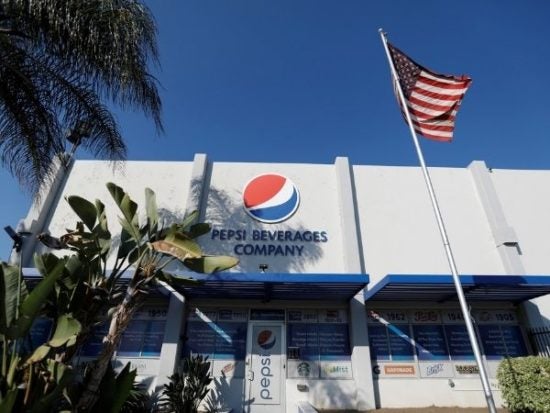 The Pepsi logo is pictured in Irwindale, California, U.S., on July 11, 2017. REUTERS/Mario Anzuoni

The partnership’s financial terms were not disclosed, and the operations will be managed through a newly created entity, PLANeT Partnership LLC.

(Reporting by Uday Sampath in Bengaluru; Editing by Shounak Dasgupta)

Impossible Foods Inc, the plant-based Impossible Burger maker, said on Wednesday it would cut prices for foodservice distributors in the United States by about 15% amid increasing demand for its burgers. 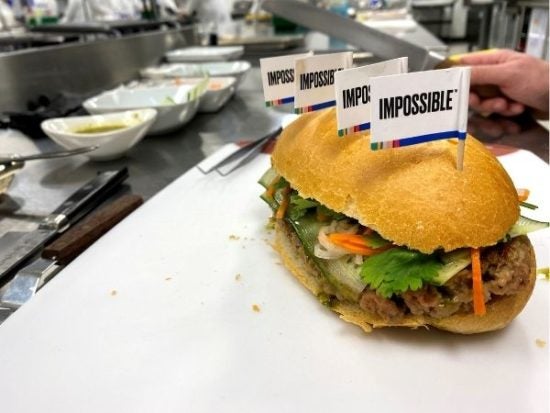 The price cut is the second in a year, and the California-based company is asking distributors to pass on the savings to restaurants and consumers.

The Beyond Meat rival has tied up with several restaurants, including Burger King, Starbucks, and White Castle, and expanded its retail footprint to thousands of stores across the United States last year.

With the latest cut, the lowest possible price to distributors for the Impossible Burger would be $6.80 per pound. However, it is still significantly higher than ground beef prices, ranging from about $2 to $3 per pound for low fat and non-organic varieties, according to the United States Department of Agriculture.

In a statement, impossible Foods Chief Executive Officer Patrick Brown noted the price cut is “not the last.”

The company, known for its vegan patties that taste and cook like real meat, says it is also lowering prices for distributors in Canada, Singapore, Hong Kong, and Macau, with varying cuts that are of base on the region.

Demand for plant-based meat has risen during the pandemic after beef and pork producers shut many meat plants to curb the rapid spread of the coronavirus outbreak. Impossible Foods said production had increased six-fold since 2019.