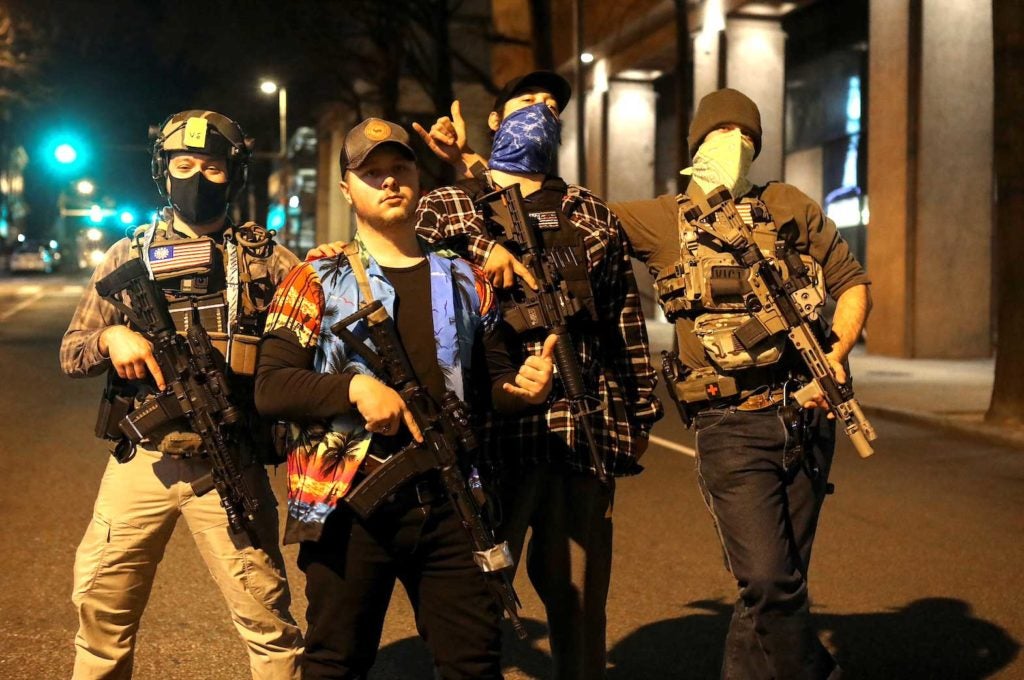 Mike Dunn, second from left, and other members of the Boogaloo Boys movement, pose for photos with their semi-automatic rifles, days ahead of President-elect Joe Biden inauguration, in Richmond, Virginia, U.S. January 17, 2021. REUTERS/Jim Urquhart

In a day with racial tensions on display, Black protesters denounced what they called a double standard in a state where people are free to openly carry firearms.

Virginians converge on the capitol each Lobby Day to petition state legislators on issues of public interest, but the day has been dominated by gun rights activists in recent years. It coincides with Martin Luther King Jr. Day, which honors the slain civil rights hero.

Reuters witnessed the police stop of the African Americans, which stood in contrast to dozens of white pro-gun activists on foot and in hundreds of trucks that drove through Richmond’s streets flying “Guns Save Lives” flags without police interceding.

They were stopped one block from Richmond’s memorial to Confederate General Robert E. Lee, less than an hour after a white, anti-government “boogaloo” leader boasted on a megaphone that his group was violating gun and ammunition laws.

One of the Black men to have handguns confiscated unleashed an expletive-laden complaint, calling it a double-standard and an example of why many African Americans resent the police.

“Everybody in the city is carrying today, and you’re only pulling us over,” yelled a Black woman who was looking on with a group of enraged bystanders. “Shoutout to Martin Luther King Day!”

Richmond police did not immediately respond to a Reuters query about the incident and about the protesters’ allegation of discrimination. On Twitter, police said they had issued a summons to one man at that scene for possessing a concealed firearm without a permit, and had confiscated the gun.

This year’s Lobby Day took place in a highly polarized climate, coming shortly after supporters of President Donald Trump seized the U.S. Capitol and after a year in which anti-racist and white nationalist demonstrators clashed at demonstrations across the United States.

Authorities were on high alert in Richmond, about 110 miles (175 km) south of Washington, D.C., where Democratic President-elect Joe Biden will be sworn in on Wednesday, replacing the Republican Trump.

Windows at the statehouse were boarded up, the public entrance was fenced off, and police patrolled the grounds.

But only dozens of protesters assembled on Monday, compared to last year’s crowd of 22,000, as estimated by police.

About an hour before the Black men were pulled over, boogaloo leader Mike Dunn hoisted a megaphone alongside about 10 members of his “Last Sons of Liberty” group, all white men.

Dunn told the assembled reporters and police that his group was openly carrying semiautomatic rifles “in pure defiance” of local laws, and “rocking mags (ammunition magazines) with double the legal limit.”

Dunn confirmed to Reuters that his group faced no police blowback.

City law allows police to ban openly carrying guns at large public events, but they did not intervene against most gun owners on Monday.

“Virginia is and remains an open carry state,” Richmond police said in a statement.

The demonstrators, including boogaloos sporting their trademark Hawaiian shirts, Proud Boys, and about 20 members of two Black self-defense groups were outnumbered by reporters.

Despite being united in their support for gun rights, racial tensions were visible.

Members of the Black Lives Matter 757 and Original Black Panthers of VA were talking to reporters near the Richmond statehouse when a group of Proud Boys walked by flashing the “OK” hand gesture commonly used as a white power sign.