Washington's Inauguration is Now a 'Ghost Town with Soldiers'

Washington’s Inauguration is Now a ‘Ghost Town with Soldiers’

Central Washington is an armed fortress, fenced off with razor wire and surrounded by 25,000 National Guard troops ahead of President-elect Joe Biden’s inauguration on Wednesday, a stark contrast to previous inaugurations when the United States capital erupted in days of celebration.

The COVID-19 pandemic had already canceled the inaugural balls. Now the National Mall is closed to the public due to threats of violence from groups who attacked the U.S. Capitol on Jan. 6. Almost none of the public will witness firsthand the transition of power, souring the mood of Washingtonians.

“It’s like a ghost town but with soldiers,” said Dana O’Connor, who walked with her husband past concrete barriers near the White House on Sunday. “It’s eerie. It feels super unnatural.”

Previous inaugurations sometimes drew over a million spectators to the National Mall to watch the ceremony from giant television screens and the new president parading on foot from the Capitol to the White House. Balls and parties in hotel ballrooms and convention halls across the city feted guests with champagne and music from A-list stars. 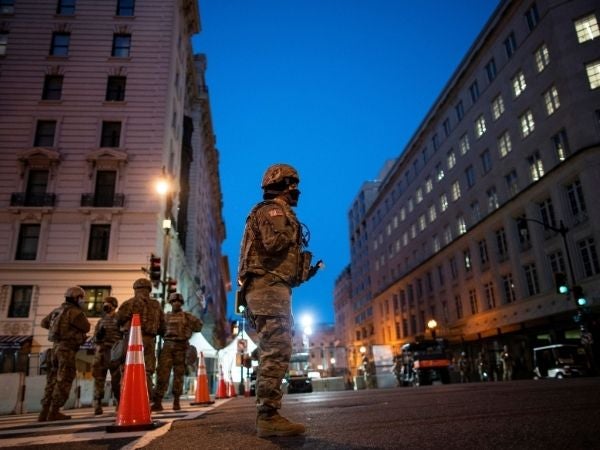 National Guard members get instructions as others stand guard near the White House ahead of U.S. President-elect Joe Biden’s inauguration, in Washington, U.S., January 19, 2021. REUTERS/Eduardo Munoz

Washington Mayor Muriel Bowser said on Sunday that law enforcement officials had no choice but to ramp up security after the deadly Capitol attack, where “so-called patriots would attempt to overthrow their government and kill police officers.”

The city will see little of the $107 million increase in tax revenue that an inauguration week normally brings, the Downtown DC Business Improvement District estimates.

Sworn in at the Green Zone

For a nation that has prided itself as a beacon for democracy worldwide, the peaceful transition of power looks anything but, said Larry Sabato, director of the University of Virginia’s Center for Politics.

“The world will see Biden sworn in, in the middle of a military camp that’s indistinguishable from the Green Zone,” Sabato said, referring to the fortress-like area of central Baghdad set up after the Iraq War.

Sabato has attended every inauguration since Richard Nixon’s second one in 1973 and Ronald Reagan’s 1985 swearing-in held indoors because of the bitter cold. But he won’t attend this one.

The Secret Service has incorporated the term “Green Zone” into its inauguration security maps. District of Columbia residents has started using the moniker for the vast restricted area running from two blocks east of the Capitol to the Potomac River west of the Lincoln Memorial.

The state of America: we’ve garrisoned 20K troops at the U.S. Capitol and established a “green zone” around Washington, DC to facilitate the peaceful transition of power. pic.twitter.com/jZ5jeEB6hs

The district, one of the most Democratic jurisdictions in the United States, voted 92% for Biden, making the current situation even more painful for many residents.

Amy Littleton, a 30-year-old political consultant who lives about 10 blocks north of the White House, said “it just feels really unfair” to be excluded from Biden’s inauguration.

“How dare these people to try to steal our joy. We never did this – as much as we disagreed with the last (presidential) election, no one ever threatened people’s security and safety.”