Fil-Am ex-cop among Trump loyalists who marched to Capitol

Fil-Am ex-cop among Trump loyalists who marched to Capitol 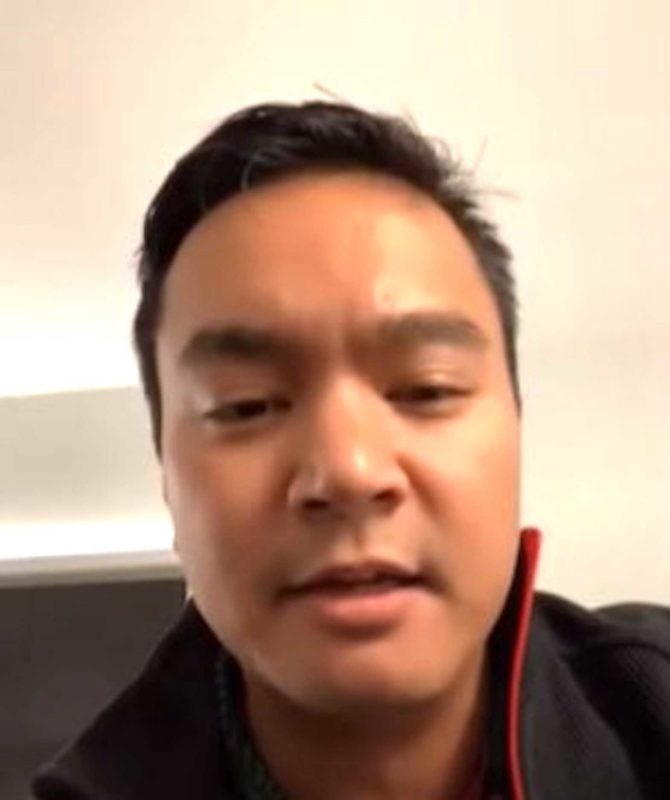 Jurell Snyder, whose family is from Iloilo: “There were many Filipinos, Vietnamese, Koreans, and a lot of Chinese protesting.” SCREENSHOT KPIX

A Filipino American U.S. Army veteran and former Oakland, California police officer was among the

mob that rallied on Jan. 6 at Capitol Hill in support of Donald Trump. Jurell Snyder said he was protesting alleged voter fraud, adding he just “stayed outside” and did not enter the building.

“The intention was for it to be peaceful,” said Snyder in an interview with KPIX-TV, an affiliate of CBS in San Francisco. “People were just frustrated and they were angry… People were unable to hold that anger in,” he told television journalist Joe Vazquez.

He further said, “The cops at the gate…they moved aside, gestured with their arms almost inviting, almost, I hate to say, it’s almost like a set-up like they wanted us to be disruptive.”

The FilAm tracked down Snyder on social media where he confirmed his Filipino ethnicity, saying his family is from Iloilo. He claimed the people who forced their way inside the Capitol and ransacked the rooms were Antifa (antifascist) activists and not Trump supporters. Supporters of President Donald Trump demonstrate on the second floor of the U.S. Capitol building in Washington near the entrance to the Senate after breaching security defenses Jan. 6. (CNS/Reuters/Mike Theiler)

“Many of the people who stormed inside the Capitol were Antifa dressed as Trump supporters. We grabbed and tussled with many of them who had Anarchy tattoos on their chest and hands,” he told The FilAm. It was the Antifa, he claimed, that “infiltrated our protest and were the main agitators damaging property with hammers and crowbars.”

News media, however, would report on the arrest of several Proud Boys, MAGA and Boogaloo members who are ardent supporters of Donald Trump.

Asked by The FilAm if he feared repercussions about losing his job, he replied, “I own the company so, no.”

Snyder is profiled on his LinkedIn account as an “experienced investigator, project manager and forensic intelligence analyst with a law enforcement background and secret clearance.” He joined the U.S. Army in 2003 and departed in 2010. He became an officer of the Oakland Police Department for more than eight years.

He echoed Philippine Ambassador Jose Manuel ‘Babe’ Romualdez who has said there were Filipinos who participated in the protest.

“There were many Filipinos, Vietnamese, Koreans, and a lot of Chinese protesting,” said Snyder.

Asked why these so-called data were not presented in court that was specifically looking for evidence, he said his group had asked for more time to put the evidence together but were denied by the courts.

“It’s why we marched!” he said, because the Democrats and foreign money were trying to steal the election.

Georgia election officials said, however, that after three recounts of the votes, there was no evidence of massive fraud. Nearly 60 courts, including two decisions at the Supreme Court, have reached the same conclusion.  The federal Cybersecurity office said the elections were free and fair, and were not compromised.(C) The FilAm 2021