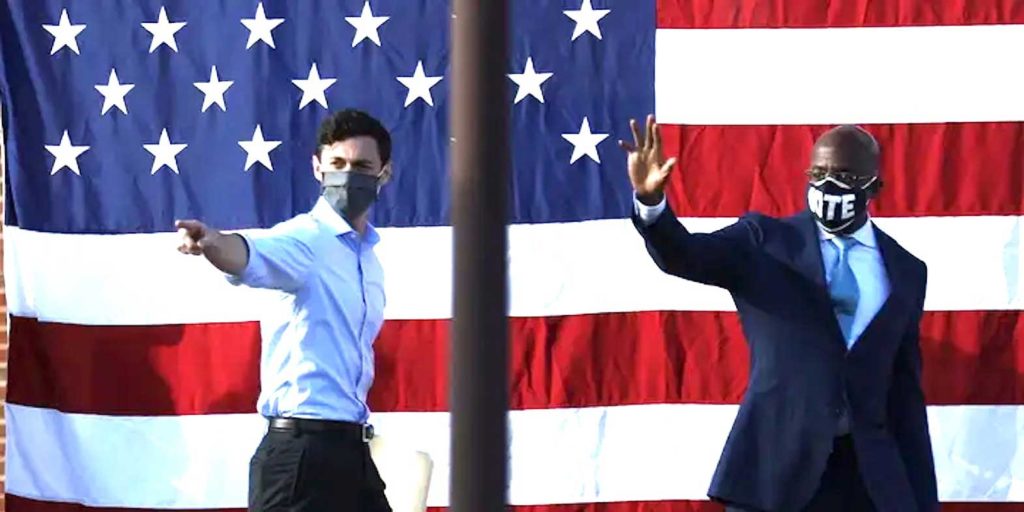 NEW YORK— “Georgia on My Mind,” written in 1930 by Hoagy Carmichael and Stuart Gorrell, became a hit when Ray Charles, the jazz great and a native of the state of Georgia, recorded his inimitable version on his 1960 album The Genius Hits the Road.

There has been renewed interest in the song, due to the impending runoff elections in that state, founded as a British colony in 1733 and named after mad King George II. Its two senatorial seats are up for grabs. If you’ve been massively bothered as I have been about the way the US Senate has conducted itself these past eight years, then you should be concerned about these elections.

At least one president has come from Georgia: Jimmy Carter, a Democrat and peanut farmer from Plains, served in the highest office from 1977 to 1981. And the state gave the nation and the world the heart and soul of the civil rights movement—the Reverend Martin Luther King, Jr. Born in Atlanta in 1929, the Nobel Peace Prize winner, charismatic Christian minister and advocate of nonviolence was assassinated while standing on a motel balcony in Memphis, Tennessee, in 1968, just two months before Robert F. Kennedy was gunned down on June 6th, in Los Angeles.

The runoff elections, with early voting already begun, will conclude on January 5th, about two weeks from now. The incumbents are Republican Senators Kelly Loeffler and David Perdue. Challenging them are Democrats Reverend Raphael Warnock and Jon Ossoff. Should the incumbents be defeated, the incoming 100-seat Senate would be equally divided between Republican and Democratic senators. The even split would effectively mean Democratic control of the Senate, for Vice-President and Democrat Kamala Harris would then provide the tie-breaking vote, should that be necessary.

The 51-year-old Reverend Raphael Warnock is an African American and senior pastor of the Ebenezer Baptist Church in Atlanta, where Martin Luther King Jr. once served. Warnock is the youngest senior pastor in the history of the church. Decidedly progressive, he advocates expanding Obamacare, or the Affordable Care Act, voting rights—particularly important in a state that has a history of suppressing minority voices—gay marriage, and a woman’s right to abortion.

The 33-year-old Jon Ossoff is an investigative journalist, former Congressional staffer, and is also considered a progressive, particularly on women’s issues, such as abortion rights, and on health care and climate change. He is opposed to prison sentences for nonviolent drug offenses.

Their opponents Loeffler and Perdue are notorious for allegedly trading on information about the seriousness of the oncoming virus early on, before the full scope and threat of the pandemic was known and made serious money. Neither one has said anything to contradict Trump’s continuing baseless attacks on the legitimacy of the national elections, and on the results in their own state that favored the Biden-Harris ticket, so fearful are they of presidential blowback, never mind that the top Republican state officials have confirmed those same results not once, not twice, but thrice.

Should Warnock and Ossoff win, control of the Senate would thankfully be taken from the grubby hands of Mitch McConnell, who has demonstrated at every opportunity he has to gladly oppose any progressive agenda. He famously swore that he would do everything in his power to render President Barack Obama a one-term president. He failed miserably. He is no doubt a wily tactician, keeping his party on a tight leash, blocking for instance the calling of witnesses in the Senate impeachment trial of President Trump, and refusing to even give President Obama’s nominee for a Supreme Court position, Merrick Garland a hearing, declaring, almost a year before the 2016 elections, that the vacancy should be filled only after the people voted for the next president—an argument he conveniently brushed aside, when he led the Senate charge to confirm Trump’s appointee to the Supreme Court, Amy Comey Barrett, just two months before this year’s presidential elections.

He has more than any elected official enabled Agent Orange’s toxic agenda, using him as much as he was used—a perfect example of quid pro quo. Well-known for his coziness with corporate interests and indifferent to the suffering and pain of the vast majority of the populace—somehow, the public coffers are empty when it comes to the average citizen—and a shining symbol of white privilege, McConnell has a multitude of sins that he has no intention of atoning for.

No one doubts for a moment that he will endeavor to continue along the same path should he and his party retain control of the Senate. More than the state of Kentucky, Senator Mitch McConnell represents most devotedly the State of Hypocrisy.  Copyright L.H. Francia 2020