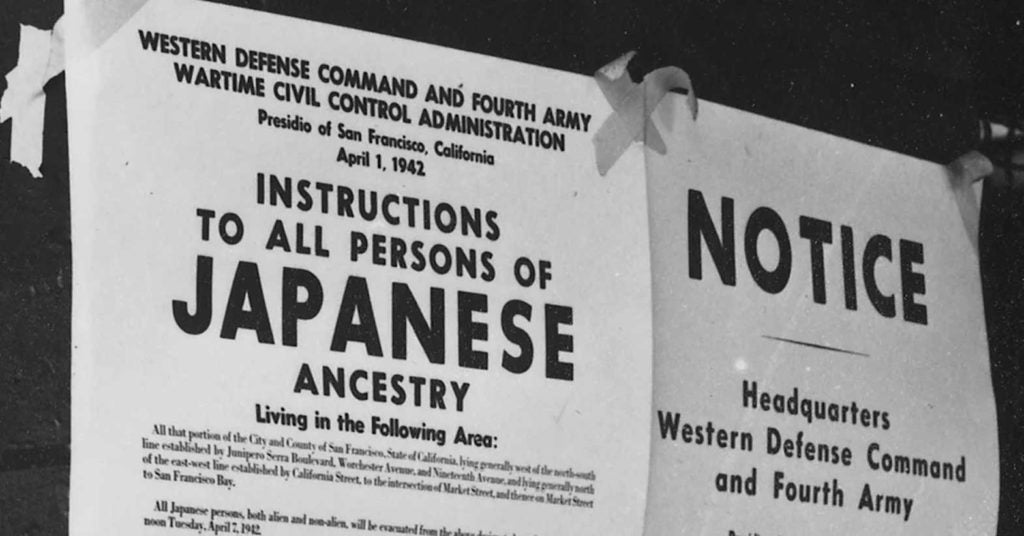 Many Filipinos in California joined the anti-Japanese American hysteria after the bombing of Pearl Harbor. FANHS

Think you know all about Pearl Harbor? Read on. There are some facts about Filipino Americans that will surprise you.

History is always worth reading simply because you’ll never know the new things you’ll learn. Or the old beliefs you’ll have to revise.

That’s especially true with subjects you think you know so much about. And that might make you marvel at how miraculous it is that we can even have a coalition of Asian ethnicities in this country that band together by necessity to form an “Asian American” identity.

I mention this because December 7, Pearl Harbor Day, the day that shall live in infamy is this week.

In 1941, the surprise bomb attack in Hawaii brought the U.S. into World War II. By Dec. 8, President Roosevelt delivered a national address and declared war on Japan. Two months later, with Executive Order 9066 on Feb. 19, 1942, Roosevelt’s order “relocated” innocent Americans of Japanese ancestry. But it also included a number of Italian Americans and German Americans. The order was more diverse than we thought. We also learned that “relocation” was a euphemism. They were all incarcerated.

Here’s the new twist for me.

I just assumed we had the same perspective as we do now–that it was all a horrible setback to Japanese Americans and Asian Americans, in general, and that we were all in solidarity. That’s my 21st century view of us back then in 1941.

Boy, was I dreaming. There was no “Asian America” back then. We were all struggling, one Asian ethnic group at a time, from racist policies against Asians starting with the Chinese Exclusion Act.

In California, it was anything but solidarity. Unless you want to consider it solidarity against both the Japanese and Japanese Americans.

Ten hours after Pearl Harbor, the Japanese attacked the Philippines and laid the groundwork for a full-fledged occupation of Manila and the islands, complete with a Filipino puppet government.

For the 40,000 Filipinos who had come to the U.S. since the early 1900s, primarily as American nationals, whose side would you be on? It was a bonding moment for Chinese and Filipinos, but specifically Filipinos with whites.

In California, most notably Stockton, it was a catalyst for change for the social status of Asian communities. Bad for the Japanese. Good for the Filipinos and Chinese.

“Once seen as half-human, inferior savages, Chinese and Filipinas/os were suddenly America’s allies, while the Stockton Japanese community immediately found itself the target of racist attacks from their Asian neighbors as well as whites,” wrote the late Dawn Bohulano Mabalon, a Stanford-trained Ph.D , who was a tenured professor of history at San Francisco State University.

Her book “Little Manila Is in the Heart,” talked about how Pearl Harbor changed the racial pecking order quickly. “Once the favored racial minorities of white elites in the Delta, ethnic Japanese found themselves under racial attack and intense scrutiny in Stockton through the winter and spring of 1941-1942.”

The reaction occurred all up and down the West Coast, with Filipinos boycotting Japanese-owned businesses, moving out of rooming halls, and even wearing badges that said “I am Filipino,” to make sure no one mistook them for Japanese.

More surprising were the oral histories captured by Mabalon.

“Oh, lotsa Filipinos were armed, ready to kill the Japanese,” Carido told Mabalon. “Lucky thing the Japanese were sent out to the camps, otherwise there would have been lotsa Japanese just fall out and died, and nobody knows? They had bad feeling against them, especially with all the killing in the Philippines. Lotsa Japanese here [in Stockton] they just disappear! Good thing that President Roosevelt had that idea to bring the Japanese, even if you are an American citizen, to the camp. Otherwise, there were lotsa people killed.”

The Stockton Daily Record reported on February 20, 1941, a day after the internment announcement, at least two Japanese had been murdered mysteriously since the war began. Asian American historian Nelson Nagai also confirmed to Mabalon that several Japanese residents were killed by Filipinos after Pearl Harbor, but no one was ever arrested.

We’ve long known about the “infamy” of Pearl Harbor from a xenophobic U.S. perspective. WE blister at the “N” word now. But there was no “J” word back then. It was “Jap”–it was ugly, and it was everywhere, as if the bombing wasn’t enough to bring out a passionate response. Now after reading history, we see how a bit of it was also on the part of other Asian Americans, specifically Filipinos and Chinese, joined in the xenophobic reaction of whites.

Did we invent a kind of self-xenophobia? Or how could that be if there wasn’t a sense of “Asian America” yet?

It’s just a different perspective on the same old Pearl Harbor, one that few people acknowledge to this day.

The actions of Filipinos are  downright shameful, yes. But in a Darwinian racist world, a Trumpian world, are we surprised by a lack of compassion?

But the majority of people joined in the white chorus shamelessly using the “J” word to enflame the hate and jingoism of the day.

Infamy? There was lots of it.

We are currently undergoing a bit of presidential infamy, where the current resident refuses to acknowledge the truth about the election or the virus.

But Pearl Harbor Day is a good reality check.

With 275,000 deaths from coronavirus to date, we will surpass the low number of WWII deaths by the mid-December. Now the large number should be eclipsed by spring, as a new projection shows close to 500,000 deaths by April.

We are now at war against the virus. Get in the fight. Mask up. Stay home. The public health crisis is real. We are approaching record hospitalizations and cases now. By one account, if we all wear masks, it could make a difference of 75,000 lives in the ongoing Trump virus death toll.

Think of your mask as a kind of wearable war bond. Save yourself, protect others.

It’s our duty to one another as Americans.

And if you’re up for it, come to my Covid Christmas party. A livestreamed “Amok Monologues: Covid, Covid, Covid,” via the Monday Night Marsh in San Francisco. It’s me. It’s free. It’s online. And if you contract Covid-19 while watching, it’s not my fault.

I talk about my family and Pearl Harbor.

Here’s the link for Monday, December 7 at 7:30 pm PT: https://themarsh.org/runs/mnmarshstream/