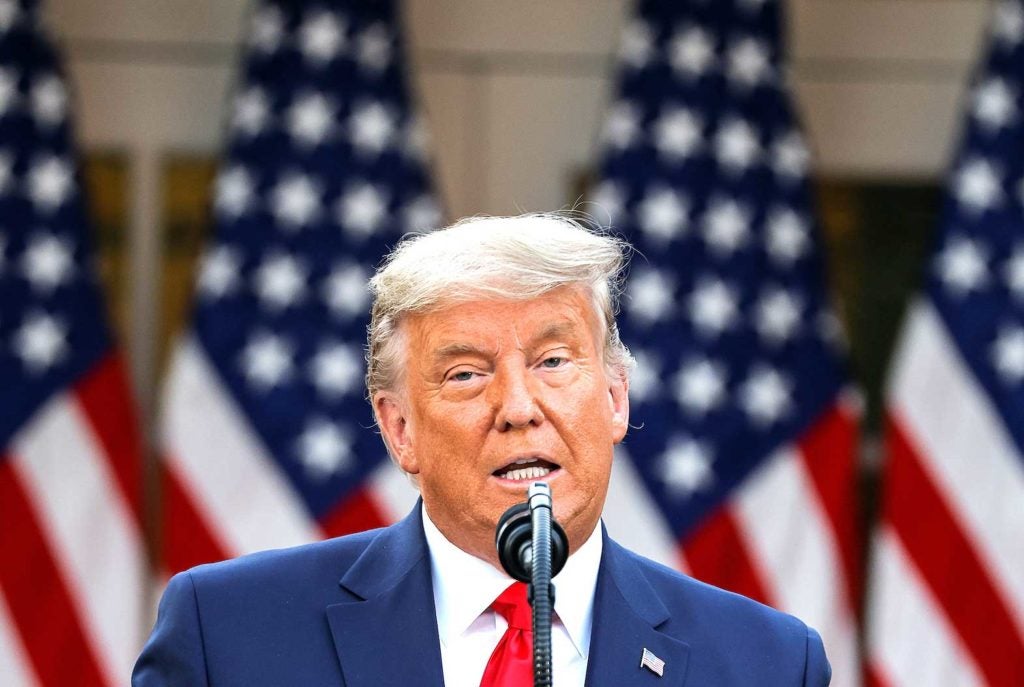 U.S. President Donald Trump delivers an update on the so-called Operation Warp Speed program, the joint Defense Department and HHS initiative that has struck deals with several drugmakers in an effort to help speed up the search for effective treatments for the ongoing coronavirus disease (COVID-19) pandemic, in an address from the Rose Garden at the White House in Washington, U.S., November 13, 2020. REUTERS/Carlos Barria

WASHINGTON/DETROIT – The U.S. presidential election battleground state of Georgia was expected on Thursday to affirm Joe Biden’s victory over Donald Trump after a painstaking recount, as Trump’s re-election campaign said it was withdrawing a lawsuit in Michigan.

“The good part was: the audit did its job” in finding a few small batches of uncounted votes that were being tallied that morning, he said. “The recount is going great.”

In the state-by-state Electoral College that determines the winner of the election, Biden, a Democrat, has captured 306 electoral votes to Republican Trump’s 232, well ahead of the 270 needed for victory. The winner in each state is awarded that state’s electoral votes, a number roughly proportional to the population.

Trump’s campaign has filed lawsuits in a number of states with scant success so far. Those legal motions, sprinkled with factual errors, have been dismissed by Biden’s campaign as “theatrics.”

Trump lawyer Rudy Giuliani said on Thursday the campaign was withdrawing its lawsuit challenging the vote results in Michigan, where this week Biden was certified as the winner in a tangled series of events.

Two Republican members of the Wayne County board of canvassers on Tuesday initially voted to block certification of the vote before reversing their decision after angry public reaction.

But both then signed affidavits on Wednesday seeking to cancel their confirmation of Biden’s win, saying they had changed their positions under pressure. A spokesman for the Michigan secretary of state’s office said the after-the-fact statement did not stop the ballots from being certified.

One of the two, Monica Palmer, on Thursday confirmed by text message to Reuters that Trump had called her to check in after certification of the vote.

Trump has a dwindling number of options to overturn the results of an election in which Biden won 5.8 million more votes nationwide. Biden is due to be sworn in on Jan. 20.

Critics say Trump’s refusal to concede has serious implications for national security and the fight against the coronavirus, which has killed more than 250,000 Americans.

Among other concerns, the administration has held up funding and security clearances for Biden staffers to ease the presidential transition.

In Pennsylvania, where Biden won by 82,000 votes, the Trump campaign is asking a judge to declare him the winner there, saying its Republican-controlled legislature should choose the state’s 20 Electoral College voters.

In Wisconsin, the Trump campaign has paid for or a partial recount, even though election officials there say that will likely only add to Biden’s 20,000-vote advantage in a state that carries 10 electoral votes.

Trump said on Twitter on Thursday that lawyers would discuss a “viable path to victory” at a news conference at noon ET (1700 GMT).

State and federal election officials, as well as outside experts, say Trump’s argument that the election was stolen from him by widespread voter fraud has no basis in fact.

However, it does appear to be affecting public confidence in American democracy. A Reuters/Ipsos opinion poll released on Wednesday found about half of Republicans believe Trump “rightfully won” the election.

Arizona’s top election official, Democrat Katie Hobbs, said she and her family had been getting violent threats and urged Trump to stop casting doubt on the result, in which he lost by just over 10,000 votes.

“(The threats) are a symptom of a deeper problem in our state and country – the consistent and systematic undermining of trust in each other and our democratic process,” Hobbs said in a statement.

Trump, who has largely stayed in the White House and kept out of public view since the election, has no public events scheduled for Thursday.