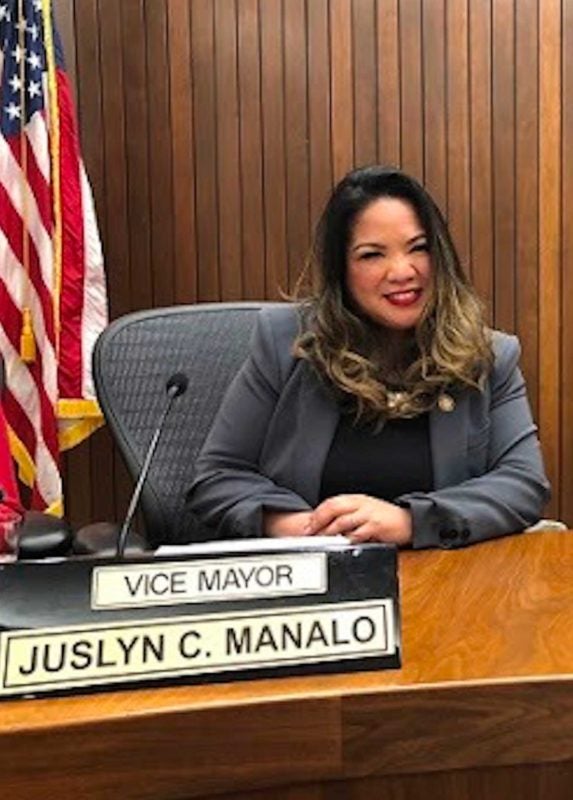 Daly City’s first Fil-Am woman elected to the City Council Juslyn Manalo is a whiz at multitasking as a working wife to “amazing” husband El Palomo and mom to their son Ethyn. CONTRIBUTED

DALY CITY, California — Vice Mayor Juslyn Manalo made a mark for herself in Filipino American history four years ago, and she will not rest on her laurels.

Until she was elected to the City Council of Daly City in 2016, no woman of Filipino American heritage had governed the town boasting the highest concentration of Filipino residents in the continental United States.  By that time, Fil-Am men had broken the racial barrier 22 years earlier, then again in the mid-2000s, then with two more elected in the last four years.

No woman of color had ever owned the title of Daly City Council Member, period.  That’s a statistic that begged to be  smashed because over half the residents of Daly City, according to the 2010 Census and in 2018 updates, are women.

Key leadership posts here are held currently by women: City Manager, City Attorney, City Clerk, City Treasurer.  Two sit on the City Council, and Manalo, who is on the ballot on Nov. 3, is poised to keep her seat.

Why the city’s most powerful body had been unreachable to Fil-Am women before 2016 is a no-brainer for pioneer community leader Perla Ibarrientos.

“Our Philippine culture conditions our women to prioritize the home and family above all,” the de facto matriarch of the Fil-Am community in San Mateo County observed.  “Those of us who first settled down here were young immigrants.  We were single or newlyweds, starting our families.  We mothers stayed home to take care of the children.  We deferred to the men to represent us outside the home then.  Men don’t mind reversing the roles anymore.”

That scenario, quaint by today’s standards, is depicted by a great-grandmother who now sits on her city’s Personnel Commission, tasked with advising the City Council on public hires.

Ibarrientos like to declare that she turned 85 in February; she’s the one whose endorsement is courted by political candidates of every.  She bloomed late and has no plans to slow down any time soon.

Manalo, on the other hand, is a child of the Third Millennium, who embraces multitasking with the support of her parents and an “amazing” husband who “understands if I have events or long meetings, and ensures I have a dinner plate ready on the side.”

She’s everywhere:  smiling on posters flowering all over the city where her family has lived since she was eight years old; urging voters to re-elect her.  She stood in the sun one Saturday in September at the Serramonte Farmers Market for an 11th hour push to get residents to respond to their 2020 Census surveys.  She packed chicken adobo meals at the Pilipino Bayanihan Resource Center distribution on Mother’s Day, joining her fellow Filipino American community organizers.  These, at the height of the Covid-19 crisis.

As if she did not have a day job with the title of Community Engagement Manager in Mixed-Use Development at the North American subsidiary of one of the largest commercial real estate companies in the world.

And yes, she has a family.  In fact Juslyn and husband Eluid Palomo are expecting a playmate for their 20-month-old son, Ethyn, before the end of the year.

Her beginnings augured a future in public service.  She could have become a physical therapist, her high school ambition born out of a desire to “help people recover,” following her parents’ example.

“My mother worked in a nonprofit helping newly arrived immigrants in San Francisco get training and job placements. She had mentioned that it was the most fulfilling job to help others,” Manalo praises her earliest role model, the former Josefina Cabrera.

“My father, on the other hand, was always the neighbor you can count on to help out and (who would be) just a doorbell or phone call away,” she says of her father Carlito Manalo.  “This is how my sister Carley-Ann and I were raised — to be respectful, kind and giving to others.”

Small wonder that the Manalos’ second daughter Carley-Ann Manalo herself is aspiring to serve in the public arena as candidate for City Clerk.

Carley-Ann’s big sis Juslyn (their names combine their parents’ names) hit the tracks immediately in her first term.  Within hours after swearing in as council member, the San Francisco native was voted by her peers as vice mayor.

The following year, Manalo became mayor of the most populous city in the county, with over 107,000 residents.  Unlike her, 52% of the population were born in another country and more than 66% speak a second language besides English.  Her community exposure through her parents gave her an edge in navigating through her diverse constituencies.

Manalo highlights the following as milestones she helped to achieve as Mayor:

Her proudest moment was saving Seton Hospital from closure, she says.  She was visible through District 5 Supervisor David Canepa’s successful advocacy for $20 million from the County Board of Supervisors for the next buyer of the area’s only non-membership hospital between San Francisco and Burlingame, a 25-mile span between two freeways. New owner AHMC Healthcare, Inc. will provide $1 million in charity care for 6 years and maintain cardiac, critical care services and women’s health services.

That drive and focus had caught the eye of her mentor-turned-colleague Councilor Ray Buenaventura. “I started noticing Juslyn when I learned of all the community and nonprofit work she was working on, especially the Filipino World War II veterans and the (accessible) Bill Sorro Housing programs,” said Buenaventura. “I admired the way she was dedicated to help the community in her outreach efforts. I would continue to see her at various events advocating for causes I believed in.”

Buenaventura guided and physically stood by Manalo through her first campaign.  “I saw her true potential in becoming a great leader. I soon took her under my wing. I appointed her to the personnel commission to give her more experience in government. She quickly blossomed and set her own path to succeed as Daly City’s first Filipina mayor.”

Such mentorship is invaluable to a newcomer but rare in the foggy city.  Buenaventura hadan urgent reason:  “I believe it was long overdue to have a Filipina on the council. No one was really pushing a Filipina candidate.” He decided to try and end the drought. “Juslyn Manalo was that ideal candidate. She had the community experience, education, background, and commitment, to serve the people of Daly City,” he recalled.

Manalo’s mettle was proved again in the pandemic.  When the novel coronavirus was confirmed early this year to have reached this country, her first thoughts were about her parents, who are among sectors identified by the World Health Organization and Centers for Disease Control as most vulnerable to the virus.  When she had established safety precautions for her family, such as “limiting their exposure” and adhering to county and state mandates, she turned her attention to the community.

“There was definitely a huge blow to the Filipino community as many (severely affected) are health care professionals. We saw the lack of PPE (personal protective equipment) for our community hospital, Seton,  and the City of Daly City even looked at our inventory and donated items such as N95 masks, gloves and PPE gowns. This was in the spirit of ‘bayanihan.'”

Through the crisis Manalo has exhibited grace and confidence, observed Allen Capalla, a Daly City resident since 1991.

“I supported her in 2016 and I endorse her today,” said Capalla, current president of Our Lady of Mercy Legion of Mary and ALLICE Alliance for Community Empowerment. “She keeps her word.  As Mayor in 2018, she promised that the City would partner with our nonprofit to educate the community about healthy relationships the following year.  She had stepped down last year, but she masterminded arrangements for us to hold our annual October presentation and family resource fair at the City Council Chambers.  That was a first for us and a huge boost to our mission.”

Despite her impending second delivery in December, Manalo has hardly skipped a beat in making sure the population and businesses thrived through the city’s comprehensive recovery plan.  She wants her son and daughter-to-come ultimately to experience “how truly special our city is.”

“The same passion to serve I had four years ago (is alive) and ever more so in these unprecedented times,” she vows, “humbly asking” for voters to write her name on one of the two open slots on the ballot in November.