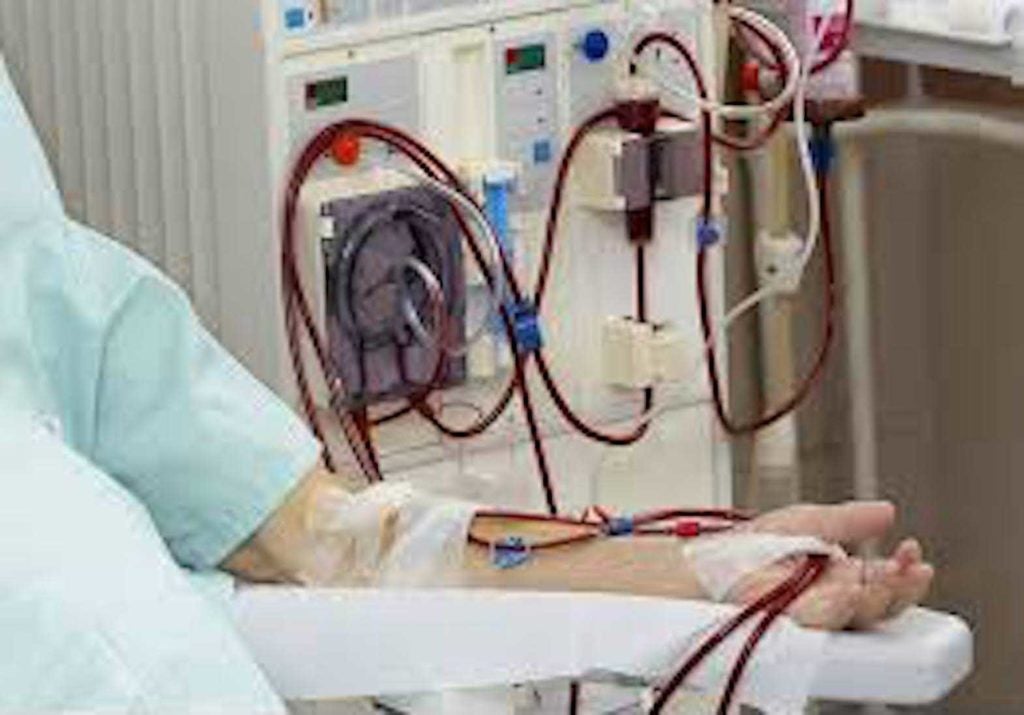 Voters heard the same dire campaign claim two years ago, when the dialysis industry spent a record $111 million to defeat a statewide ballot measure that would have limited clinic revenues.

SACRAMENTO — The survival of California’s dialysis clinics is in the hands of its voters this November.

Voters heard the same dire campaign claim two years ago, when the dialysis industry spent a record $111 million to defeat a statewide ballot measure that would have limited clinic revenues.

Industry giants DaVita and Fresenius Medical Care are back on the defense again this year with their checkbooks open, flooding voters’ mailboxes and screens with political ads highlighted by heartfelt testimonials from patients against Proposition 23. With more than a week left before Election Day, the industry is on track to break its own spending record.

The union, which has tried but failed to organize dialysis clinic workers, has been the driving force behind both ballot measures, putting voters squarely in the middle of a long-running brawl — and forcing them to make decisions that could affect the health of tens of thousands of Californians.

“There’s no reasonable evidence that this would improve patient health,” said Erin Trish, associate director of the University of Southern California’s Leonard D. Schaeffer Center for Health Policy & Economics. “It seems largely to be driven by retaliation by SEIU-United Healthcare Workers West, who are mad the dialysis facilities wouldn’t let their workers unionize.”

Proposition 23 would require dialysis clinics to have a licensed physician on-site during all dialysis treatments, but that doctor wouldn’t need to be a nephrologist, a kidney specialist. Clinics would have to report infection data every three months to the California Department of Public Health, and those that plan to close would need state approval.

About 80,000 patients visit the state’s 600 licensed chronic dialysis clinics, three-quarters of which are owned or operated by DaVita or Fresenius, the largest dialysis companies in the country, according to a report by the nonpartisan state Legislative Analyst’s Office.

Patients with kidney failure often need a dialysis machine to filter toxins and remove excess fluid from their blood when their kidneys can no longer do the job. The treatment is arduous, taking roughly four hours at least three times a week.

Dialysis patients are susceptible to infection for a variety of reasons: Their immune systems are already compromised by their kidney failure, they are around other sick patients while receiving treatment, they require catheters to access their veins, and their blood is cycled through a machine.

Even though mortality rates have dropped among outpatient dialysis patients nationwide, infections remain a leading cause of death. In California, about one-third of outpatient clinics have fallen short of federal performance standards so far this year, resulting in lower Medicare payments to those clinics, according to federal payment records.

“With this initiative, we’ll make sure that they put more of those huge profits back into the clinics to improve safety and improve care,” said Steve Trossman, spokesperson for the union.

Dialysis clinics are once again threatening to close if the measure passes and they’re faced with higher operating costs.

Shama Aslam, 50, spoke at the behest of the union. Aslam, who visits a dialysis clinic in Stockton three times a week, described swatting fruit flies off her face and arms for hours while hooked up to a dialysis machine. She has polycystic kidney disease and has been waiting three years for a kidney transplant.

“It was really bad today,” Aslam said on a recent October afternoon. “It’s very uncomfortable. And because we’re dealing with blood all the time, we don’t want any infection. That’s a huge thing, at least for me.”

Aslam wishes she could see a doctor more than once a month. Nephrologists oversee their patients’ dialysis care, but clinic staff members administer the treatments. Federal regulations require a medical director, who is a board-certified physician, to oversee every dialysis clinic in the country. But there is no requirement that those directors remain physically present at the clinic when it is open. That’s what the California ballot measure would mandate.

Rick Barnett, chief executive officer and president of Satellite Healthcare, which operates 80 dialysis clinics in Texas, Tennessee, New Jersey and California, including Aslam’s clinic, said he had not heard of fruit flies at that Stockton facility. Medicare has not penalized that clinic this year, according to the payment database.

Many nonprofits like San Jose-based Satellite Healthcare could not afford to hire on-site doctors if Proposition 23 passes, Barnett said. Currently, medical directors often oversee multiple clinics in addition to their other job responsibilities.

The Legislative Analyst’s Office estimated it would cost each clinic several hundred thousand dollars a year, while the industry says $600,000 a year. Each clinic likely would have to hire more than one doctor to cover all hours.

Barnett estimates Satellite would close up to 40% of its 67 clinics in California should the ballot measure pass.

“It comes down to an attack on the industry,” he said. “This is one of the few sectors of health care they haven’t organized.”

Trossman vehemently disagreed that the union is trying to punish the dialysis companies over its failed unionization effort, saying the union invests in improving people’s lives.

“In terms of the idea that we would spend millions of dollars because essentially we’re ticked off is just ludicrous,” he said. “We don’t spend money that way.”

The California Medical Association, which represents physicians, opposes the measure, saying it would exacerbate the state’s doctor shortage by diverting physicians into dialysis clinics.

“This will bring physicians who are not trained in kidney disease or dialysis to just be present without any role or purpose, or even a clear path to any intervention because they won’t know what to do,” said Dr. Edgard Vera, a nephrologist and the medical director of DaVita dialysis clinics in Southern California’s High Desert towns of Hesperia and Victorville.

Critical emergencies, such as wild swings in blood pressure, already are handled by technicians and nurses certified in dialysis care, Vera said. Should a patient go into cardiac arrest, “if a physician is there, they are going to call the ambulance anyway,” he said.

DaVita alone had given nearly $67 million to the “No on 23” campaign as of Wednesday, more than half of the $105 million raised so far by the industry, according to campaign finance reports filed with the California secretary of state. The campaign’s other contributors include Fresenius, Satellite Healthcare, U.S. Renal Care and Dialysis Clinic Inc.

The “Yes on 23” campaign has reported just a fraction of that, with nearly $9 million in contributions. SEIU-United Healthcare Workers West gave the bulk of the money, with the rest — about $40,000 — coming from non-monetary donations from the California Democratic Party.

Proposition 23 follows an uneven record of wins and losses for the union on dialysis issues in California. The union tried but failed to organize dialysis workers three years ago, arguing that they needed safer working conditions and job protection. It also lost its 2018 ballot initiative that would have capped dialysis clinic profits.

But, last year, the union helped persuade state lawmakers to adopt a bill that aimed to stop a billing practice dialysis companies use to get higher insurance reimbursements for some low-income patients. A federal judge in January temporarily blocked the law from taking effect while the court considers its constitutionality.

“It’s not unusual for us to be voting on similar issues over and over again if they’re backed by powerful enough interests,” said Danielle Joesten Martin, associate professor of political science at California State University-Sacramento, pointing to other repeat ballot measures on the November ballot, such as the Realtor-backed Proposition 19. That measure would give Californians over 55 years old a property tax break when buying a new home.

They’re “powerful interest groups who didn’t get what they wanted the last time around.”

This story was produced by KHN (Kaiser Health News), which publishes California Healthline, an editorially independent service of the California Health Care Foundation. KHN is not affiliated with Kaiser Permanente.