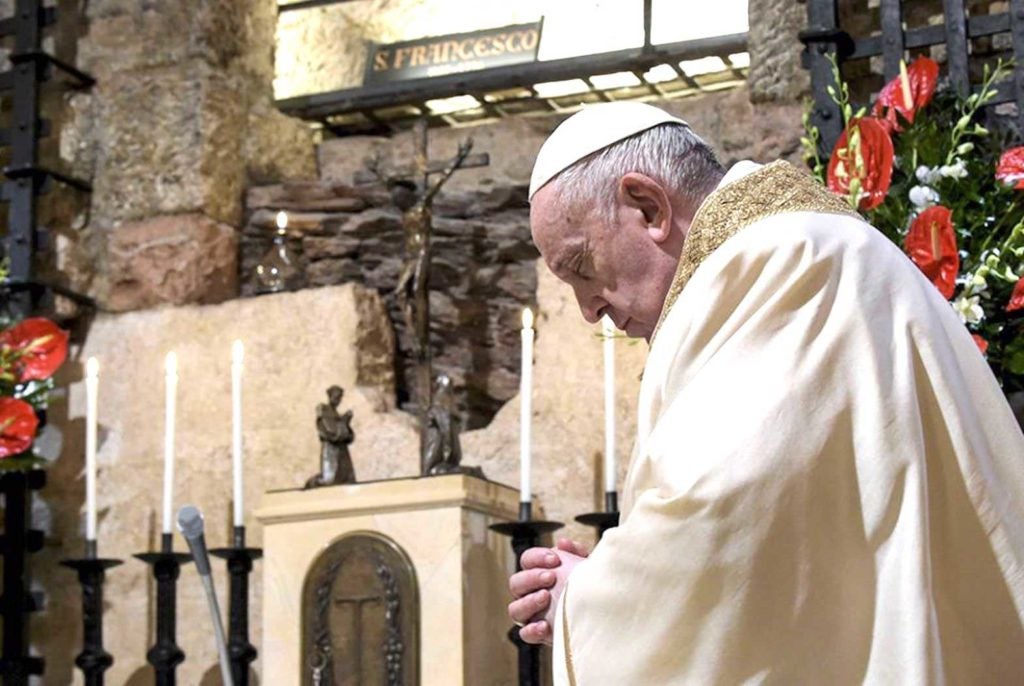 Pope Francis celebrates Mass at the tomb of St. Francis in the crypt of the Basilica of St. Francis Oct. 3 in Assisi, Italy. The pope signed his new encyclical, “Fratelli Tutti, on Fraternity and Social Friendship,” at the end of the Mass. (CNS/Vatican Media)

Fratelli tutti, “Brothers all,” is the newly published 300-page encyclical of Pope Francis on universal brotherhood and sisterhood. The title is Italian but the original text is Spanish.

I’ll cut to the chase and apply its penetrating messages to the issue of Philippine politics, most specifically that of the House of Representatives. I begin by saying that the new encyclical is meant to raise the drooping spirit of humankind, knocked down by Covid-19, wars and conflicts, bad politics, and other man-made disasters.

Rather shamefully, the kind of political decisions that our Representatives make are meant, in most cases, to pull the Filipino spirit downward, not sideward, as if a heavy weight was tied around the ankle, plunging the neediest among us further into an unredeemable despair. Our politics is failing us and that’s the blatant truth!

While Fratelli tutti dutifully sounds the alarm against a “culture of walls,” our Congressmen and women are building up massive and higher walls around their self-interests and the superabundance of the powerful dynasty. Honor is gone and the prefix “honorable” has become a public embarrassment.

The Holy Father discusses and visualizes a future based on human solidarity, which is the polar opposite of a House awfully divided. The Speakership debacle has torn our Christian nation apart. Alas, our Filipino congressmen and women, mostly baptized Christians, have gotten rid of fraternalizing or “sororalizing” among themselves and, while focusing on outrageous squabbles, completely stopped thinking about the common good (see Par 180).

Fratelli tutti comes at a time when the Filipino nation is on the brink of failure, when redemption cannot come from outside and we ourselves needed to redeem us. It’s timely that Chapter V of the encyclical, “Better Politics,” is offered as a radical blueprint for post-Covid politics and a pastoral guidance for every voter to make our world a little better.

Go and fill up the 308 in the House of Representatives (247 from congressional districts and 61 seats via the party-list system). Fratelli tutti reminds us that the natural right to private ownership is secondary to the universal destination of created goods (see Par 120). Therefore, empty Congress of lawmakers and political proteges, who do nothing except collect their monthly salaries and annual “pork barrel.”

Choose worthy politicians to succeed the current Philippine President and 12 Senators. Embrace the true notion of “populism” as defined by Pope Francis in his encyclical that counters the kind of “populism” that we have, which attracts consensus or high survey ratings in order to increase its own popularity and exploit the people all the more (see Par 159).

Reject all politicians who quarrel with other world leaders and are incapable of dialogue (see Par 215). Ditch all politicians who kill and threaten the innocent, who close the businesses of their perceived enemies, and who jail critics and others who disagree with them. Reject those who disrespect “the sacredness of life” (Par 283).

Fratelli tutti portrays a vision of a future based on universal brotherhood and not on manipulation, intimidation, or exploitation.

We cannot allow ourselves to go back to the tayo-tayo-sila-sila mentality, pinpointed by Fratelli tutti as a mortal sin, when the rush to return to the new-normal politics beckons. But the new-normal politics means the resumption of the unscrupulous operations resulting to backdoor deals, 8 out of 10 Pinoys sleeping the night with empty stomachs, dirty patronage, foolhardy use of valuable resources and people’s money, nepotism, character assassinations, and the ugly others.

Fratelli tutti guides every voter, and all men and women of goodwill, to make the “new normal” to be a “new different.” Fratelli tutti invites us to do more than just make small changes to our lives.

I am confident, if only we pray it more than read it, Fratelli tutti can restore to the Filipino his good conscience.

Jose Mario Bautista Maximiano ([email protected]) is the author of THE SIGNS OF THE TIMES and the Social Doctrine of the Church: An Epistemology (Salesiana, 1991) and MDXXI: 500 YEARS ROMAN CATHOLIC (Claretian, 2020).