The Los Angeles Lakers will switch to their “Black Mamba” jerseys in honor of the late Kobe Bryant when they seek a record-tying 17th NBA championship on Friday.

The Lakers, who lead the Miami Heat 3-1 in the best-of-seven NBA Finals, are 4-0 this postseason when wearing the Bryant-designed alternate jerseys, which are black with gold trim and feature a subtle snakeskin pattern.

“It means something. Something more than just a uniform,” Lakers forward LeBron James told reporters on Thursday.

“It represents an individual who gave the franchise 20 years of his blood, sweat and tears and his dedication to his craft, both on and off the floor, to make that franchise be proud of him, and hopefully vice versa.” 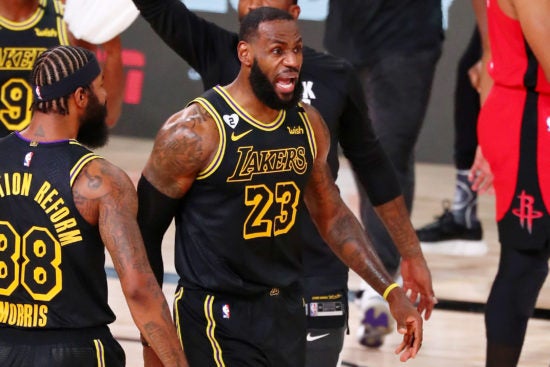 move it up for Friday’s game at Disney World in Florida, where the season resumed in July after a four-month COVID-19 hiatus.

The uniforms were introduced during the 2017-18 season.

Bryant, one of the greatest players of his generation who won five NBA titles during a 20-year career with the Lakers, was killed along with his daughter Gianna and seven others in a helicopter crash in January.

In addition to the original jersey design, the uniforms also feature a patch bearing the number two, Gianna’s jersey number, inside a white heart.

Bryant’s widow went on Instagram to express her excitement over the jersey choice for the potential series clincher.

Should the Lakers win the championship this year it would be the franchise’s first since Bryant led the team to the second of back-to-back titles in 2010 and tie them with the Boston Celtics for most championships in NBA history.

LAKERS PLAYER LEBRON JAMES AFTER BEING ASKED WHAT HE THINKS ABOUT THE KOBE BRYANT DESIGNED ‘MAMBA’ JERSEY, SAYING:

“I thought they were cool from when I seen ’em when they wore ’em a few years and obviously until you get your hands on ’em you don’t really get to see the detail in ’em, it’s super-duper detailed. It has that snake mamba print on it…and it means something. Something more than just a uniform, it represents an individual who gave a franchise 20 years of his blood, sweat, and tears and his dedication to his craft both on and off the floor to make that franchise be proud of him, and hopefully vice versa, so, you know, like, think last year we had a Shaq (Shaquille O’Neal) jersey, Magic (Johnson) did one as well. I just think it’s pretty cool when you know you’re wearing the uniform that a legend had his hands on.”

LAKERS PLAYER ANTHONY DAVIS AFTER BEING ASKED IF REMAINING UNDEFEATED WHILE WEARING KOBE ‘MAMBA’ JERSEY DURING GAME FIVE MIGHT BE TOO MUCH OF A BURDEN SINCE ALSO TRYING TO CLINCH NBA TITLE, SAYING:

“If we come out and do what we’re supposed to do then we can remain undefeated. We just think that, you know, for all the things that happened this season, you know with our team specifically, and our organization, that to be able to close it out in, you know, the black mamba uniform will just make it all worth it. You know obviously his legacy in the NBA and just with this organization period, is something special, and for us to just, like I said, close it out, you know, in his honor, it’s something that just, we look forward to, something that, you know, an insane amount of pressure for sure, we don’t want to lose, we don’t want to let him down, you know anytime we lose in the jerseys, you know we feel like we let him down and we don’t want to do that, we want to remain undefeated but, you know, if we come in and do the things that we’re supposed to do on both ends of the floor then we can remain undefeated and you know close this thing out and make this moment even more special.”