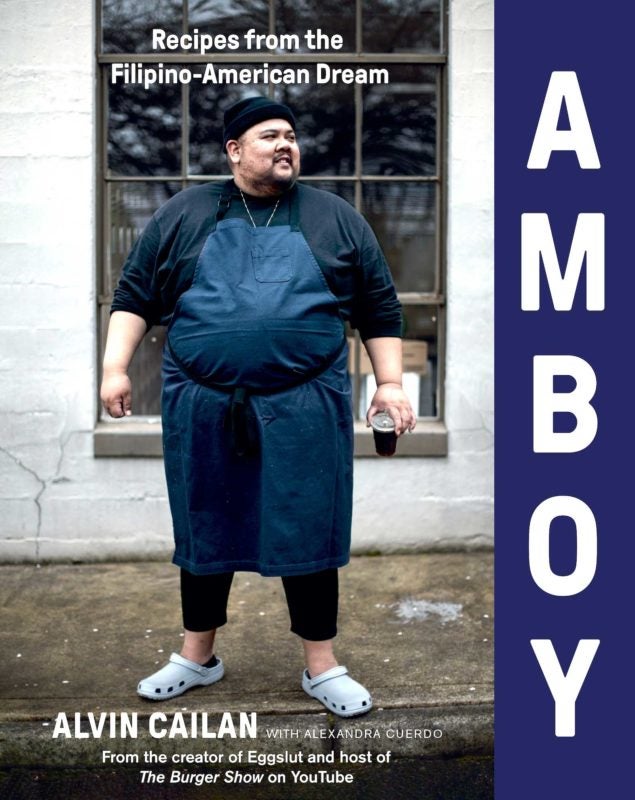 LOS ANGELES — Filipino food was on the cusp of becoming the next big trend when Alvin Cailan decided he wanted to write a cookbook.

The goal of the Filipino American chef and founder of the popular restaurant Eggslut – known for its breakfast sandwiches – was to do whatever he could to elevate Filipino culture and food.

It was 2016 when Cailan began working on his book. Donald Trump had been elected president of the United States that year, he noted, and Trump’s anti-immigrant rhetoric strengthened his purpose behind what he was writing.

“Hate it or love it, but know that the book was made to show the world that a child of immigrants who didn’t follow a traditional path to success can still keep the American dream alive during a time when our president doesn’t even believe that we deserve to dream, let alone be in America,” he wrote in the preface.

His book, “Amboy: Recipes from the Filipino-American Dream,” co-authored by writer and filmmaker Alexandra Cuerdo, was published and recently released by Houghton Mifflin Harcourt.

“This cookbook is the story of Amboy,” he wrote. “It’s the story of not being Filipino enough to be Filipino, and not being American enough to be American. It’s about a Filipino American kid trying to make it work in a world where everyone says no. About making it happen and being true to who I am. About just owning it.”

Going after what he truly wanted in life led Cailan to establish Eggslut in 2011. It started out as a food truck before he secured a brick-and-mortar location in Los Angeles’ Grand Central Market in 2013. Eggslut has since received multiple awards and expanded to four other locations in the U.S., as well as several others in Korea, Japan and the United Kingdom.

Cailan subsequently established a ramen restaurant and a food incubator for various chefs. He most recently opened a new restaurant, Amboy Quality Meats and Delicious Burgers, in Los Angeles’ Chinatown.

The process of writing “Amboy” involved hours and hours of conversations with Cuerdo, Cailan said. One of the hardest parts was revealing details about his life, he said, because he prefers to keep his life out of the spotlight.

“But when I realized, ‘You know what? I actually have a story and people really need to know it,’ I began to really grab it by the horns and go for it,” he said. “And honestly, it started to become like therapy.”

Some of the episodes in his life that Cailan writes about date back to his experiences growing up in Pico Rivera, a neighborhood in Southeast Los Angeles. He recalled the education system being poorly funded and that it was challenging for residents to better themselves. He also shared details about his rebellious teenage years and how his knowledge of Filipino food expanded under the guidance of his mom’s cousin Auntie Cita, his first kitchen mentor.

In reflecting on his life, Cailan said he knew he was always going to be in the kitchen. His first job at 15 years old was as a dishwasher – a job in the kitchen, he noted. He also remembered receiving praise for the first steak he ever cooked.

“That was a self-realization that no matter what I did, I will always be the dude who cooks,” he said.

Still, he wound up attending college and then working an office job at a construction company – both things his parents thought he ought to do.

“Then I realized that a four-year college degree in business wasn’t what I was passionate about,” he wrote. “I did everything my parents wanted me to do, and I wasn’t happy.”

A pivotal moment for Cailan came when he decided to move to Portland to attend culinary school. It’s a time in his life he devotes an entire chapter to in “Amboy.” He packed his bags and drove to Oregon to pursue his dream without telling his family or friends because he knew if he did, they wouldn’t let him leave.

“It was the literal chapter in my life that changed my life all the way through and through,” he said.

Cailan said his book is for people who love to cook – an activity everyone can do at home amid the Covid-19 pandemic, he noted.

“And also if you’re thinking of changing your career or starting your culinary career, this is a great book to read as well because it shows you no matter what background you are, what race you are, everyone’s going to go through what I had to go through in order to start a restaurant,” he said.