Fil-Am chefs to be featured in LA Times 'Food Bowl'

Fil-Am chefs to be featured in LA Times ‘Food Bowl’ 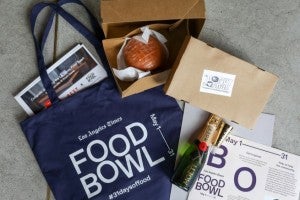 LOS ANGELES — Foodies here have yet another reason to rejoice: this May, the Los Angeles Times is launching a 31-day food festival at various locations throughout the city.

So far, Massimo Bottura, chef-owner of Osteria Francescana in Modena, Italy, and founder of Food for Soul; Fergus Henderson, chef and founder of St. John in London; Rosio Sánchez, chef-owner of Hija de Sánchez in Copenhagen; and Magnus Nilsson, chef at Fäviken in Sweden, have been confirmed. More chef appearances will be announced closer to May.

A Night Market patterned after the global street food scene will be held at Grand Park in downtown from May 10-14, where over 50 restaurants and food trucks are expected to be present, as well as different live entertainment each night.

“I talk about Los Angeles as being this fabulous mosaic a lot,” Gold told the guests at the festival’s launch event on Tuesday, Feb. 7 at Spring in downtown LA. “What we’re trying to do with this festival, I guess, is cast the mosaic into an enormous, all-encompassing bowl — lots of things in the bowl, lots of flavors of Los Angeles, lots of the creativity of the chefs and the purveyors and foreigners and everybody who make Los Angeles the most exciting city in the nation.”

For the local Filipino-American community and those with adventurous palates, this month-long occasion is not be missed, especially since Filipino cuisine will have its own spotlight during the month.

Fil-Am chef Alvin Cailan (of Eggslut, Unit 120 and Amboy) is among those leading the curation of the Filipino program during the Food Bowl.

“We were among the first people approached, which is an honor, because of what we’ve done in the past year,” Cailan told the Asian Journal on Tuesday. “Being that we have a high caliber and talent of chefs, we are actually one of the cultures and cuisines that really make an impact in the bowl, so to speak.”

He will be working with other Fil-Ams in the culinary industry for this, including pastry chef Isa Fabro, Chase and Chad Valencia of LASA, and Charles Olalia of Rice Bar. Some ideas floating around include showcasing street food and pastries, a food symposium, a night of lechon, and a multi-course dinner featuring five or so Fil-Am chefs.

“We’ve got to represent Filipino food and our culture and the bounty of the Philippines here,” Cailan added. “It’s our time.”

He urged all Fil-Ams, whether first, second or third generation, to come out and attend the festival to see how Filipino cuisine is taking off and being adapted for a global audience.

“My biggest campaign for the ‘I Love Filipino Food’ movement is to get the community involved,” he said. “We have all the talent in the world, we have the best chefs in the city. Now we just ask our brothers and sisters, our kababayan, to show support for what we do. The price point is not a factor because there will be street food, not just fancier dinners.”

Gold, whose 101 ‘Best Restaurant’ list includes Far East Plaza — where Unit 120 is located —  and Rice Bar, said he’s looking forward to having Filipino cuisine and chefs be a part of the Food Bowl. (Last year, he delivered a glowing review of LASA, calling it “more or less the center of Pinoy-California cooking in Los Angeles at the moment.”)

“I’m hoping we’ll have a lot of Filipino food at the festival. It’s the cuisine that everyone’s really excited about right now,” Gold told the Asian Journal. “The Filipino food scene, say 25 years ago, was always like bread and pancit, adobo that was sitting out for too long and dinuguan that was sort of clumpy. But this new generation of young Pinoy chefs in Los Angeles is using all the great ingredients here in order to do versions of Filipino food, where the flavors are crisp.”

He added, “They’re not afraid to bring the funkiness out, but in refined ways.”