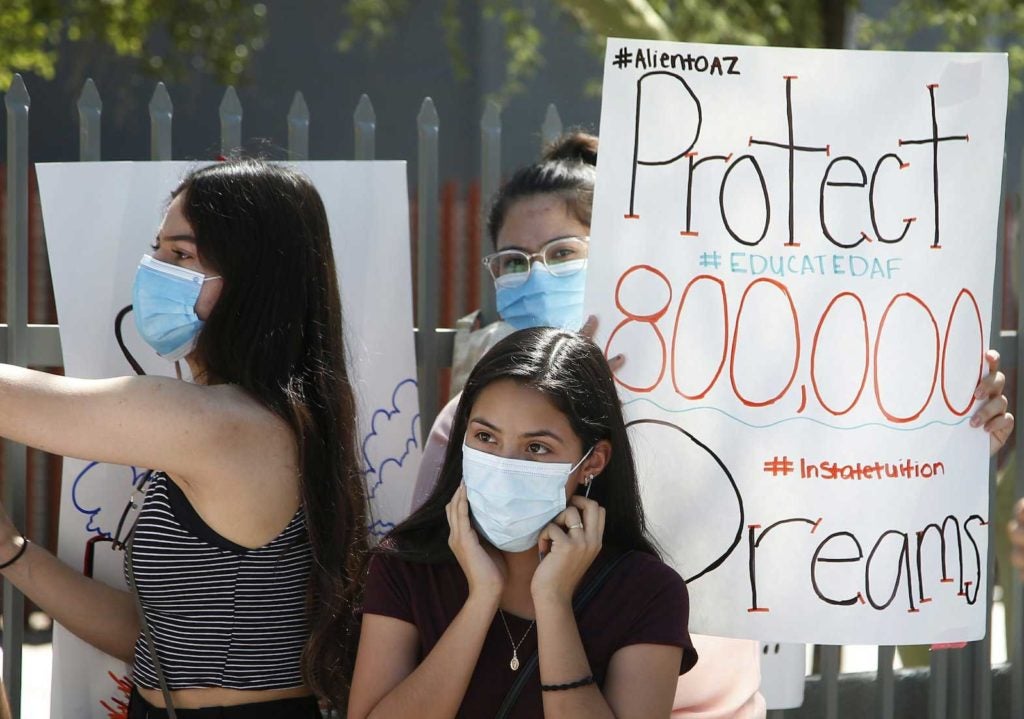 Deferred Action for Childhood Arrivals recipients listen to speakers during a news conference in front of the U.S. Immigration and Customs Enforcement building after the U.S. Supreme Court ruled on the DACA program Thursday, June 18, 2020, in Phoenix. The U.S. Supreme Court ruled President Donald Trump improperly ended the program that protects immigrants brought to the country as children and allows them to legally work, keeping the people enrolled in DACA. (AP Photo/Ross D. Franklin)

CHICAGO— The Trump administration said Tuesday that it will reject new applications and shorten renewal periods for an Obama-era program that shields young people from deportation, taking a defiant stance after the U.S. Supreme Court refused to let it be scrapped completely.

The move, detailed in a memo from Acting Homeland Security Secretary Chad Wolf, ended a month of uncertainty about how the administration would respond to its Supreme Court defeat in an election year that has President Donald Trump looking for ways to energize his base.

Wolf said the administration may try to end the Deferred Action for Childhood Arrivals program again, casting it as a law enforcement issue that could contribute to illegal immigration. He said the federal government needs more time to consider next steps, presenting the measures as a temporary change.

About 650,000 people are part of DACA, which allows young immigrants who were brought to the country illegally as children to work and shields them from deportation. Roughly 66,000 people meet age requirements to apply, according to the nonpartisan Migration Policy Institute.

The government will deny all new applications, limit renewals to one year instead of two, and deny requests by DACA recipients to visit their home countries unless there are “exceptional circumstances.” Recipients may seek permission to return home for family events, such as funerals or weddings, and other reasons, though the Trump administration has generally denied them.

The Supreme Court ruled last month that Trump failed to follow rule-making procedures when he tried to end the program, but the justices kept a window open for him to try again.

The White House has been devising plans to make another push to end DACA, though it was not immediately clear whether he would make the politically sensitive move before November’s election. Democratic rival Joe Biden wants to keep DACA unconditionally.

A federal judge in Maryland ruled earlier this month that the program should be restored to its original form, but the administration was mum until Tuesday on whether it would start accepting new applications. The White House anticipates legal challenges.

The administration’s monthlong silence had unnerved many DACA recipients and those who wanted to join. U.S. District Judge Paul Grimm of Maryland, an appointee of President Barack Obama, has given the administration until the end of Friday to update the U.S. Citizenship and Immigration Services’ website and start adequately explaining why applications are rejected.

Legal experts were skeptical of the Trump administration’s authority to roll back parts of the program. Legal challenges were expected.

“This is a move that is in defiance of the U.S. Supreme Court ruling and a federal court ruling,” said Shoba Sivaprasad Wadhia, an immigration law professor at Penn State Law. “It’s a lawless landscape that we are in.”

Advocacy groups, including the American Civil Liberties Union and scores of immigrant rights advocates, blasted the move as cruel.

Laura Mendoza, a program manager at The Resurrection Project in Chicago, joined the program in 2013. She said the $495 annual renewal fee would be difficult for many to pay.

“It’s infuriating that we continue to be the punching bag for the administration,” she said of fellow DACA recipents. “The administration is slowly dismantling the program.”

Wolf, the Homeland Security chief, acknowledged that the $495 renewal fee will be a burden on DACA recipients who will have to apply annually instead of every other year, effectively doubling the cost. He said the department would consider lowering the fee.

Trump has tried unsuccessfully to work with Congress on a broader immigration package that would couple DACA with tougher enforcement measures. He has said lately that he would announce sweeping new steps on immigration, a promise he reiterated Tuesday.

“We’re going to work with a lot of people on DACA,” Trump told reporters. “And we’re also working on an immigration bill, a merit-based system, which is what I’ve wanted for a long time.”

Trump said he would make DACA recipients “happy” without saying how.