For this gay photographic artist, art is for love’s sake

For this gay photographic artist, art is for love’s sake 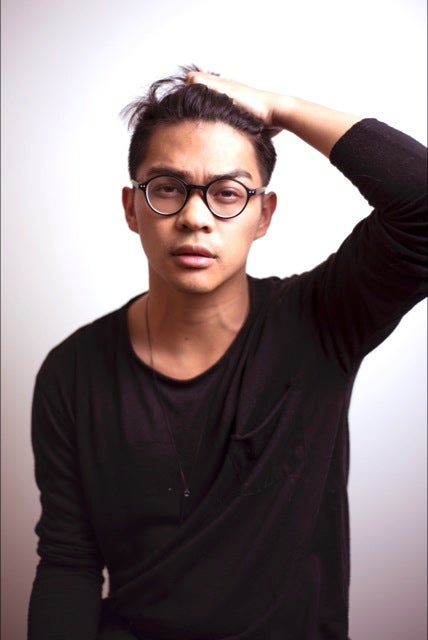 “One day I went to confession to come out to God. I wanted to tell the priest that I was gay and that I was making work about the conflicts I feel inside. Why did God make me this way if it was wrong?

“After unleashing all this emotion on the priest he said to me, ‘Okay, but I have one question. Do you feel blessed?’ I said, “Yes. I do. I feel like I’m supposed to be who I am making what I’m making. Everything about my life is beautiful and I’m so thankful for it. ‘Well, there you go. God has answered you,’” he responded.

Kelvin Burzon, 28, is an associate instructor of photography at the University of Cincinnati. He received master’s in fine arts from Indiana University’s School of Art + Design.

Although Kelvin’s photographic art speaks about his identity, which revolves around religion, sexuality, race and gender, it also tells us about the current situation in many societies. His work may be sacrilegious to many, but he started it to fight bigotry.

“On March 26, 2015, my birthday, Indiana’s government passed the Religious Freedom

Restoration Act, which is a law that allows businesses to use religion as an excuse to refuse business to certain groups of people,” Kelvin explains.

The Act signed by Gov. Mike Pence into law allows Indiana businesses to use religious freedom as a legal defense against lawsuits for discriminating against gays.

“This felt like a direct hit to the LGBTQ+ community. Suddenly I felt the two worlds I was in, stuck in a quarrel. I wanted to create imagery that challenged this. I wanted to create a space where both communities can coexist: gays and Catholics,” Kelvin explains.

Kelvin says he cannot avoid this art from reflecting what he is — Filipino, Asian, gay and Catholic. He says he must tell his story to the world because he has the means and opportunity to share a message through his art.

Growing up in Orani, Bataan, Kelvin’s fondest memories were events closely tied to religion. When he was a child, he dreamed of becoming a priest. 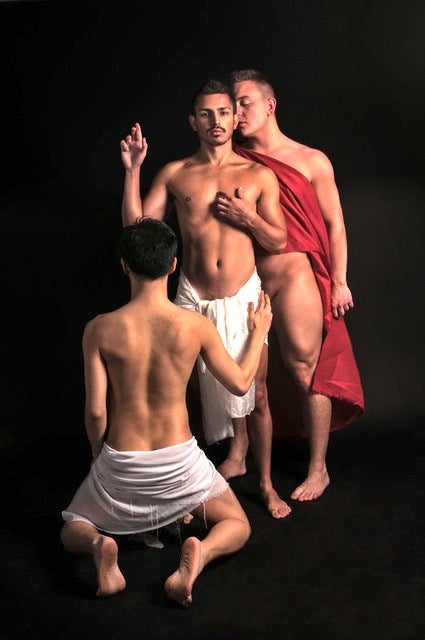 “My grandmother would bring me with her to the church; told me stories of the Bible; took me to Church festivities. I was fascinated with the extravagance of it all,” Kelvin narrates.

As part of the Catholic tradition, Kelvin memorized hymnals. The Holy Eucharist fascinated and mesmerized him. Like most Catholics, the Burzon household kept statues and figurines of saints.

Kelvin confides that as a child he would play with the statues and figurines of the saints and parade them around the house. Playing priest was also a part of his game. He would give communion to his friends.

His artistic inclination started young too. Kelvin loves make-believe and is always inspired by the human body.

Like most Filipinos, Kelvin’s family dreamed of an education and a life that only American soil could offer. The Burzons immigrated to Fort Wayne, Indiana in April 2000 when Kelvin was 11 years old.

“My maternal grandmother married an American stationed in the Philippines and ever since my mother was young the process of petition and immigration was under way,” Kelvin says.

Upon leaving the Philippines, Kelvin’s paternal grandfather gave him a Bible in Tagalog. Inscribed on the cover were words of caution not to forget the Filipino culture and where he came from.

Kelvin admits that he was young and naïve to recognize discrimination then. “I didn’t really experience discrimination to a point of it impacting my future. But there were times that I could only hang out with other ESL (English as a Second Language) students, or I’d get certain looks, or had to live up to stereotypes attached to my body; but no extreme case,” Kelvin recalls. 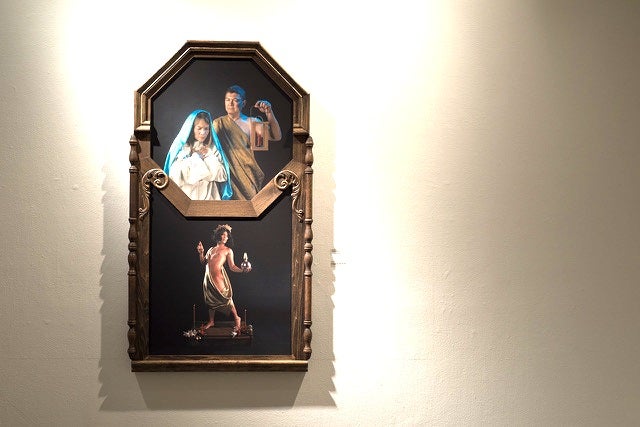 “My family home is very much Filipino! We speak Tagalog, kamayan pag kakain, there’s a tabo in the bathroom, and when you’re naughty you get palo, ” Kelvin laughs.

But there was a point that the merging of the two cultures happened. Kelvin recalls that they began to speak less Tagalog and started to adopt American values and manners.

“My mom would be cooking tuyo and my friends would wonder why our food smelled so horrible. But eventually I grew out of that shame and so did my friends,” Kelvin says.

The artist as a Filipino and Catholic

“I juggle a number of identities that I must be aware of. I’m Filipino. I’m American. I’m gay. I’m an artist, a musician, a dancer, etc. But my identity as a Filipino acts as an umbrella,” Kelvin explains.

“Religion was a big part of growing up both in the Philippines and America. We continued to go to church and to pray the rosary whenever family was together. And I always felt loved and free to be who I wanted,” Kelvin says.

When he came out as gay, Kelvin had to confront the fact that Christian beliefs are often used to justify hatred for people like him. He will have none of it.

“I am blessed. I want to share the love that I feel every day existing in the gay community and the Christian community. I don’t want people like me to turn their backs to aspects of their culture and their identity because they don’t belong together. I want them to realize how beautiful coexistence can be,” Kelvin explains.

Kelvin says, “An artist will create no matter what; so use what you have to share yourself with the world.”

Kelvin’s art works were installed at Grunwald Gallery of Art at Bloomington, Indiana University of School of Art + Design on April 17, 2017.