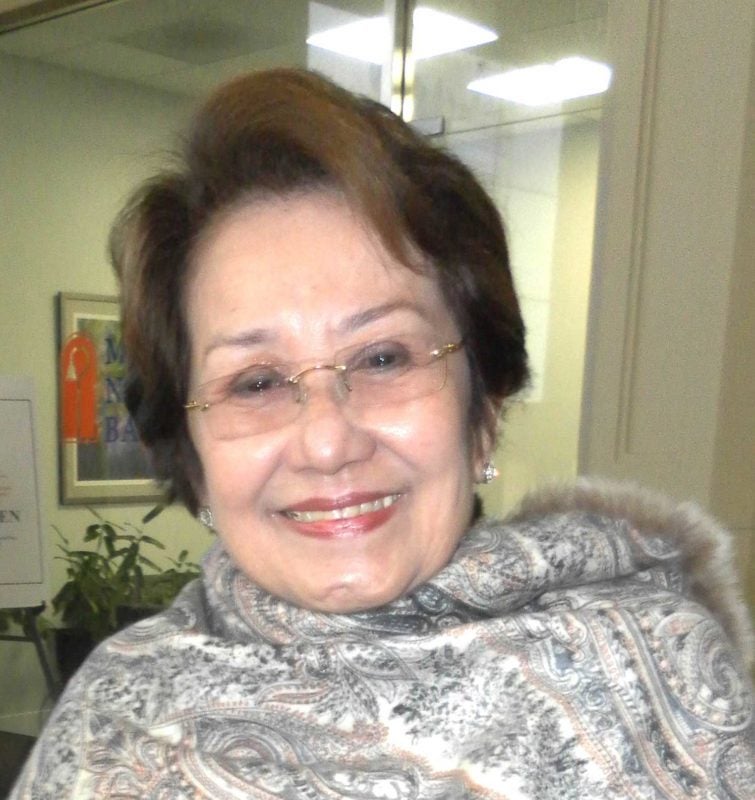 Ninoy Aquino’s sister Lupita Aquino Kashiwahara reiterates that “the blood he (Ninoy) shed on the airport’s tarmac symbolized the ultimate sacrifice he made for a return to democracy in the Philippines” as she decries   to rename Ninoy Aquino International Airport. INQUIRER/Jun Nucum

“I wonder whether those proposing to change the airport’s name would even be in office today had it not been for Ninoy,” the respected Philippine movie and television director who lives in of San Francisco Bay Area, said in a personal statement.

“The blood he (Ninoy) shed on the airport’s tarmac symbolized the ultimate sacrifice he made for a return to democracy in the Philippines.”

Many countries have used airports to honor their own historical figures including Indonesia, India, Thailand and the United States. They have not lost their national identities in doing so,” Kashiwahara noted.

The bill’s explanatory note states, “NAIA is the international gateway of the Philippines, being the biggest and largest international airport in the country. As such, there is a need to identify the same belonging to the Philippines. Hence, the proposed renaming to ‘Paliparang Pandaigdig ng Pilipinas.’”

Kashiwahara wondered for whom the proponents were changing the airport’s name. “Most foreign tourists will have no idea what the Tagalog name means and Filipinos already know the airport is in the Philippines. The revisionist congressmen are playing politics while attempting to deny their country’s history.”

Paolo Duterte, in an earlier statement, said the name-change proposal “bears no color, no political agenda.”

Vice President Leni Robredo and a number of opposition senators also branded the proposal as “ill-timed” and “divisive” in the midst of the Covid-19 pandemic.

“We all know why the country’s main gateway to the world was named after former Senator Benigno Simeon “Ninoy” Aquino Jr.,” Robredo was quoted in CNN Philippines “The Source.”

In an earlier statement, Senate Minority Leader Franklin Drilon wondered why the congressmen were thinking of renaming NAIA when the nation is facing a pandemic.

“If it ain’t broke, don’t fix it. I believe we can do better than that.” Drilon said any effort to rename NAIA “would always be seen as political.”

Senator Risa Hontiveros echoed Drilon saying that calling the proposal as “ill-timed and insensitive” would be an “understatement.”

There are at least 33,000 confirmed Covid-19 cases in the country that is far from flattening the curve while health workers still lack the protection and support that they need, Hontiveros said In a text message to INQUIRER.net.

Senator Francis Pangilinan is also skeptical of the bill’s timing which he said should “be the least of our concerns now that we are facing the pandemic and millions have lost their jobs and are starving.”

For his part, Yap clarified that fighting the Covid-19 pandemic is still their top concern and that their proposal is not a priority and has not been taken up in the plenary: “Congressmen are free to file measures anytime. It is up to the Committees when to schedule its deliberations.”

The bill’s sponsors claim they are not discounting the contributions of late ex-senator Benigno Aquino Jr.. Yap contends that they just “deem it more appropriate for our international airport to bear the name of the country. Instead of it reflecting just one hero, we want it to reflect our everyday heroes — the Filipino people.”

Drilon argued that many airports across the world are named after “heroes and individuals whose lives shaped the history of their countries. He cited as examples JFK Airport in New York, Louis Armstrong International Airport in New Orleans, Charles de Gaulle Airport in Paris, Indira Gandhi Airport in India, Israel’s Ben Gurion Airport, and Canada’s Montreal-Pierre Elliot Trudeau Airport.

Yap also noted that NAIA previously was identified as the world’s worst airport although it was “recognized as 10th most improved airport in 2018 by the British-based consultancy Skytrax’ 2018 survey.

“Along with this recognition, it is high time to rename NAIA so we could finally let go of its negative image,” Yap maintained.