’Why Him’ gives fresh spin to meet-the-family comedy

’Why Him’ gives fresh spin to meet-the-family comedy 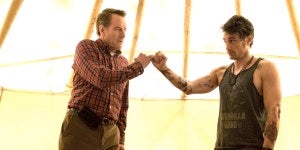 Bryan Cranston and James Franco star in the new comedy “Why Him.” CONTRIBUTED

Over the holidays, loving but overprotective dad Ned Fleming (Bryan Cranston) travels to California to visit his daughter at Stanford; where he meets his biggest nightmare: her well-meaning but socially awkward Silicon Valley billionaire boyfriend, Laird Mayhew (James Franco).

Ned thinks Laird, who has absolutely no filter, is a wildly inappropriate match for the apple of his eye. Ned’s panic level escalates when the straight-laced Midwesterner, who finds himself increasingly out of step in Laird’s glamorous high-tech world..

Ned Fleming seems like a guy who’s on top of the world. Owner of a mid-sized printing business in Grand Rapids, Michigan, Ned is genial, outgoing and adored by his employees, his friends and his wife Barb (Megan Mullally), daughter Stephanie (Zoey Deutch) and son Scotty (Griffin Gluck).

But life becomes a little more complicated for, as Ned is known, during his 55th birthday party when Stephanie joins the event via Skype to send well wishes to her dad from her Stanford dorm room. The Flemings and their party guests are surprised by an unexpected and naked introduction to her new boyfriend, or at least a part of him. Distraught over the fact that Stephanie has uncharacteristically been hiding something from him, Ned begrudgingly agrees to travel with the family to spend the holidays in California to meet his daughter’s first serious boyfriend.

Despite Laird’s repeated attempts to make the Flemings feel at ease during their stay at his Palo Alto estate, Ned only becomes increasingly uneasy. Before long, Ned is vowing to do whatever it takes to bring down the man he perceives as a rival; with the situation escalating even further once Ned knows Laird plans to propose to Stephanie.

Himself a father, Cranston could relate to Ned’s struggle and his reluctance to let go. Ned is a good man motivated by a deep commitment to his daughter, and Laird is just not what he had in mind as a potential son-in-law. It’s tough as a dad to see your child grow up and become an adult. You’ve been responsible for them all of their lives and are expected to voluntarily let go of that grip and away they go.

The tense tug-of-war between Ned and Laird; small-town conservatism versus the anything-goes excess of Silicon Valley, forms the spine of the story. The whole show really is about these two men and their stubbornness about how they maneuver around each other for the favors of the daughter.

What’s great about Laird is that he’s not capable of lying. “He’s impulsive and socially crude and hurts feelings sometimes because he says what’s honest and we know that that’s not always the best policy. But on the other side, he also doesn’t have the gear to be dishonest or deceitful, which makes Ned think he has an ulterior motive because no one is that good and must be up to something. He thinks Laird is going to do something and is going to get him before he does.

Not everyone responds to Laird so negatively, though. Barb, Ned’s college sweetheart, is increasingly open to Laird’s unconventional approach to the world, and she appreciates how far he’s willing to go to gain Ned’s affection. Barb is a little less buttoned-up than Ned and has a little bit more of an artistic bent so she’s a little more open-minded to Laird than Ned is. Laird keeps saying how sexy Barb is to her face. He talks about her slammin’ bod and all this stuff, and she doesn’t really know how to respond to it. But she kind of likes it, you know, in a very chaste way. She sort of blossoms and has a little bit of an awakening, if you will.

Also becoming increasingly swayed by Laird is Ned’s 15-year-old son Scotty, who comes to Palo Alto a buttoned-up junior-corporate-executive-in-training and leaves a ‘Silicon Valley’ beanie-donning hipster. Stephanie just wants everyone to get along and ends up putting out fires all the time. At every point something goes wrong and she feels like she’s watching these car crashes right in front of her. She’s stuck in the middle and doesn’t want to have to choose between her family and the man she loves.

Laird’s character, he’s wealthy, successful, in some ways he has it all, but all he really wants is a family. Ned thinks Laird is trying to show him up, but in truth, Laird is in awe of Ned because of the life he’s built for himself. “Why Him” is firmly rooted in Ned’s perspective is traditional, small-town father forced to accept that his daughter is an adult capable of making her own decisions. But coming to terms with her love for Laird also means navigating a Silicon Valley culture entirely foreign to his more conventional sensibilities.

He’s an analog man in a digital world and gets completely lost in the conversation. While Ned is fighting to keep his small independent printing press alive, Laird is making millions in the digital realm and living in an eco-friendly house that’s entrirely free of paper.  While there’s very much a war going on between these two men, the conflict also originates in a conflict we see going on all around us between the old and the new, the increasingly obsolete and the emergent.

From director John Hamburg, “Why Him” puts a hilariously fresh spin on the anxiety-inducing tradition of introducing one’s significant other to the family. “Why Him” roots it’s outrageous humor in genuine emotional moments, mining some of life’s most relatable situations for big laughs.

This is a story about a normal family; they go into an abnormal world, but it’s a world rooted in reality. “Why Him” is funny as hell but very much anchored in authentic, relatable human relationships. It’s comedy out of circumstances that sometimes gets extreme but is always tethered back to character and to relatable human experiences.

But it’s not just the film’s outrageous stunts or wild physical comedy that’s likely to stick with moviegoers. For one believes the truly relatable story of a devoted father finding a way to embrace the unconventional tech billionaire his daughter loves that’s at the center of “Why Him” will resonate with viewers this holiday season.

It’s a funny family comedy about acceptance and connection. A lot of comedy is derived from the differences between us and is best when born in a sense of reality. If an audience leaves a theater and has a lot of laughs, that’s a value in itself. If an audience laughed and actually felt something, that’s the rich experience we hope to achieve.