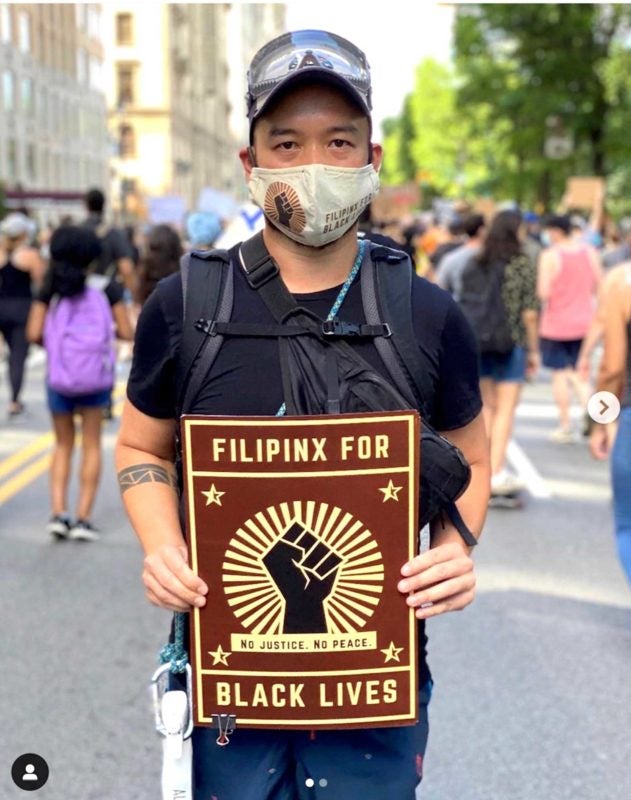 Kalaya’an Mendoza, a New Yorker, with the poster he designed, which is now a symbol of Filipino American participation in the Black Lives Matte protests sweeping the United States. INSTAGRAM

“It’s important that when we talk about anti-blackness, we frame it in terms of, these are our kababayan (compatriots) as well. This is our kapamilya (family members),” he said.

Mendoza said the idea for the campaign, “Filipinx for Black Lives and Asians for Black Lives,” was born in 2014 after riots in Ferguson, Missouri broke out following the death of Michael Brown, who was killed by a police officer. Black Lives Matter cofounder Patrisse Cullors that year had asked non-black people of color to educate and inspire their communities to build solidarity with black liberation.

Social justice activism is a “genetic” aspect of his life, Mendoza explained. He was 2 years old when his parents left the Philippines during the Marcos regime. He remembers seeing the People Power Revolution on TV when he was 7 and feeling inspired by the non-violent uprising.

For more than two decades he has been an organizer for non-violent movements across the country and the world — for the LGBTQ community, for Tibetan independence, and against the construction of the Dakota Access Pipeline in North Dakota.

After Breonna Taylor and George Floyd were killed by police earlier this year, Mendoza re-released the posters he created in 2019, which have been seen in protests across the country over the last few weeks. 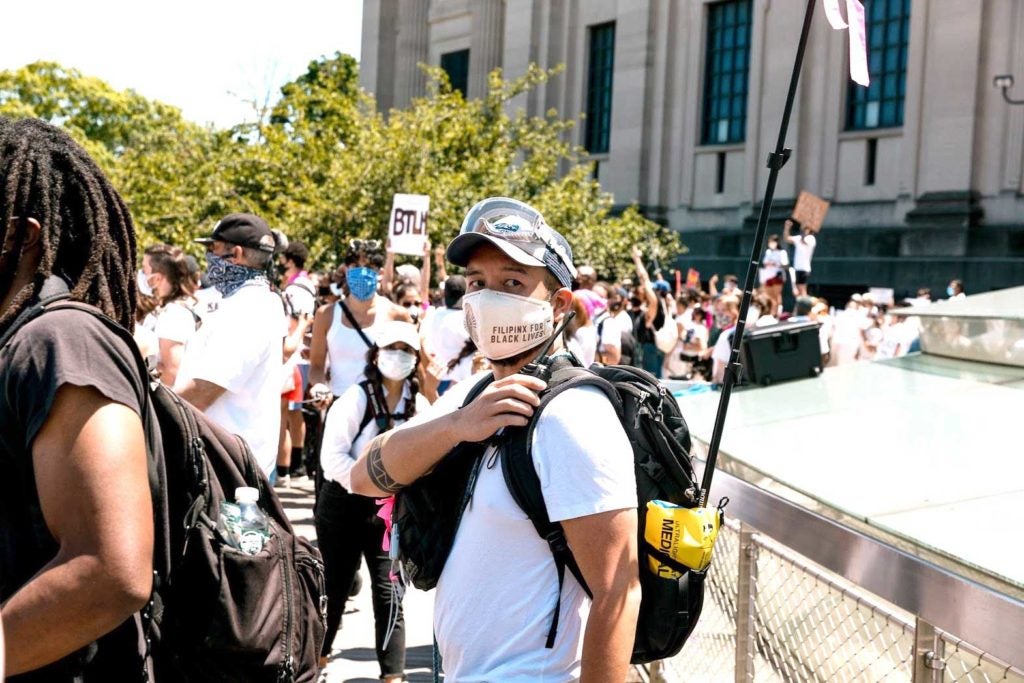 Artist Kalaya’an Mendoza coordinates the Safety and Security operations and infrastructure of the March for Black Trans Lives which includes street marshals, medics, healers, bike marshals and other volunteers present at the massive rally and march organized by Brooklyn Liberation on Sunday, June 14. COLE WITTER

His design features the black power raised fist in the center to represent how the lives, struggles and liberation of black people must be centered in the work that is being done today, he said. He drew inspiration from the rays of the Philippine golden sun for a circle behind the fist, which represents non-black people of color following black leadership. Four stars surrounding the fist and circle represent 4 principles that have guided Mendoza in his solidarity work: be inclusive; emphasize bottom-up organizing; allow the directly affected to speak for themselves; and work together in solidarity and mutuality.

The campaign has since expanded to include more than 100 communities for Black Lives Matter, including specific Asian groups, Latinos, queers, trans and Palestinians.

Mendoza has made the design available to the public – which people can access by emailing him – to allow people to use it where needed to support black liberation. It has been printed on various merchandise, including sweatshirts for fundraisers and face masks.

The Fil-Am activist said that since George Floyd’s death, he has corresponded via email with more than 5,000 people who have inquired about his posters. The volume of interest prompted him to create an auto reply message that contains a link to the five most popular designs, resources on solidarity and activist safety, suggestions on organizations to donate to and background information on his campaign.

Even when protests slow down, Mendoza plans to continue to make his posters available to the public. He said his intention was to invite the Filipino community to see themselves in the movement. But he also hopes it will serve as an invitation for individuals to have honest conversations with their families.

“I know a lot of people are bringing the posters back home. They’re hanging them up, and if their family sees it, it’s like, ‘Ano itong black lives? What does it mean?’” he said.

While there’s long been a reluctance for Filipino Americans to discuss anti-blackness, Mendoza believes several factors leave the community with no choice but to address it. One of those, along with the momentum of the Black Lives Matter movement, is the Covid-19 pandemic. It’s something that has shone a light on the inequities many marginalized communities face, he said. This includes Filipino American health care workers who are among those that have faced a shortage of protective equipment as they respond to the crisis on the front lines.

“Many of us have benefited from black organizing. Many if not all of our families wouldn’t be here if not for black organizers who made sure that the 1965 Immigration and Nationalization Act passed,” Mendoza said. “But now we’re at a point where we need to and we’re called to talk about it.”

Mendoza hopes that the “Filipinx for Black Lives and Asians for Black Lives” campaign will push people to step up their efforts from activism to organizing. He notes that while demonstrating is oftentimes glamorous, much of the work that propels change happens behind the scenes: at computer screens, having hard conversations at the dinner table and talking to legislators.

“It’s not just enough to have symbolic solidarity,” he said. “We really need to move towards transformative solidarity where we can dismantle oppressive systems together and build and create a new world for all of our people.”