Philippine democracy on the ropes

Philippine democracy on the ropes 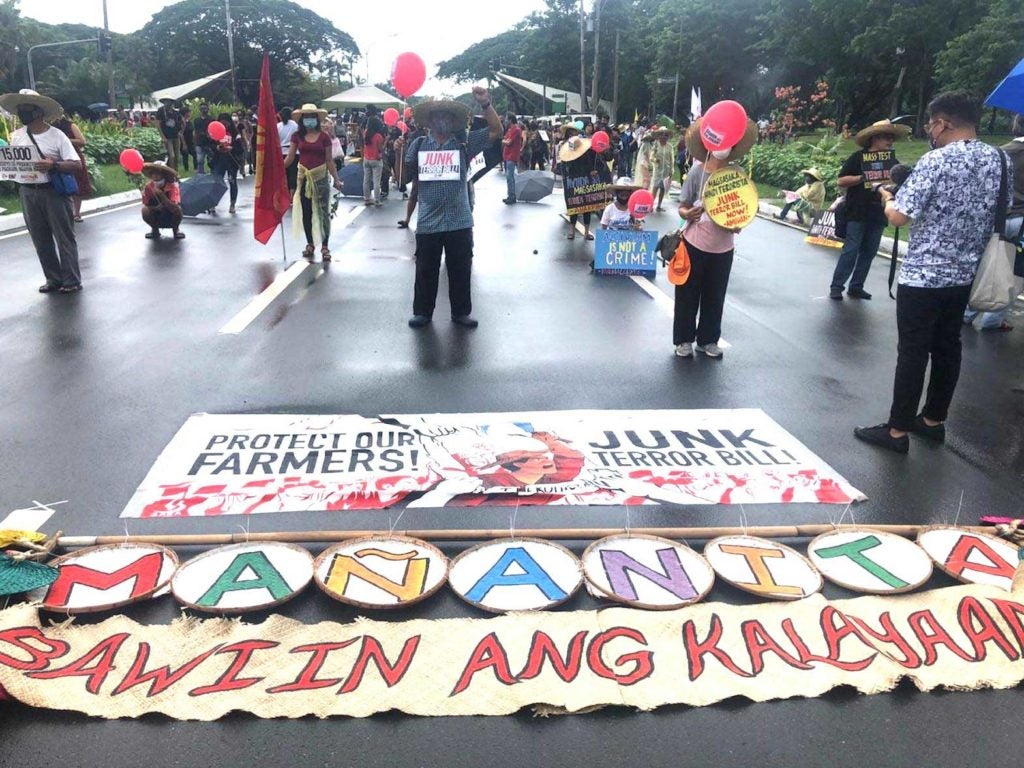 A recent protest at the University of the Philippines against the pending Anti-Terrorism Law. INQUIRER FILE

This could be my last article about the Philippines. Or perhaps the last time anyone can freely write a piece remotely critical of the Philippine government.

S. No. 1083 was passed in February 2020 and soon, when Republic Act No. 9372 or the “Human Security Act of 2007” is repealed and replaced by the consolidated House and Senate bill or “The Anti-Terrorism Act of 2020,” critical writing could be construed as a violation of Section 9 of the new law or inciting to commit terrorism through “speeches, proclamations, writings, emblems, banners, etc.” and subject to imprisonment of twelve (12) years.

The new law would create an Anti-Terrorism Council (ATC), chaired by the Executive Secretary and vice-chaired by the National Security Adviser. Accordingly, a warrantless arrest can be ordered by the ATC, which will also determine what constitutes an act of terrorism, a role reserved for the courts as defined in the Philippine Constitution.

The ATC may designate as terrorist(s) “an individual, groups of persons, organization, or association, whether domestic or foreign, upon a finding of probable cause…” that such entities committed, attempted to commit, or conspired to carry out terrorist acts enumerated in Sections 4-12.  And while there is a provision in the bill which excludes “advocacy, protest, dissent, work stoppage, mass action, etc.”, these activities can be categorized as terrorism if, according to the bill awaiting the signature of President Duterte,  they “create a serious risk to public safety.”

And who decides if such activity is a serious risk to public safety? The Anti-Terrorism Council.

This is a far cry from what the United Nations General Assembly defines as terrorism, i.e.  “criminal acts intended or calculated to provoke a state of terror in the general public…” or what  NATO considers the  “unlawful use or threatened use of force or violence, instilling fear and terror, against individuals or property in an attempt to coerce or intimidate governments or societies, or to gain control over a population, to achieve political, religious or ideological objectives.”

The Council does include the Secretary of Justice among its nine members. And Section 45 supposedly balances the makeup of the ATC. But herein lies the problem. Section 29 authorizes the ATC to order the arrest of suspected terrorists. When suspects are prosecuted, an apparent conflict would arise because the National Prosecution Service (NPS) is under the Department of Justice (DOJ), whose secretary is a member of the ATC. Which prosecutor would dare countermand a decision approved by the Secretary of Justice?

Sec. 50 of the bill does stipulate the creation of a “Joint Congressional Oversight Committee” composed of twelve members from the House of Representatives and the Senate. The Congressional Committee can summon law enforcement or military officers and members of the Anti-Terrorism Council to ask questions and submit an annual report, but the provision looks like an afterthought on checks and balances. It certainly does not come close to the independent effectivity of an Inspector General’s Office.

In effect, the Anti-Terrorism Council, in the words of Phil Robertson, deputy Asia director at Human Rights Watch, becomes the all-powerful “prosecutor, judge, jury, and jailer.”

This quadruple threat is precisely the cause and concern of the demonstrations and rallies that have erupted across the nation against the anti-terror bill. The definition of terrorism is subject to arbitrary interpretation by a handful of cabinet members and government officials, with little oversight. Their decision can trigger a chain of events that allows police to wiretap, arrest, and detain suspected terrorists, who can then be jailed, pending charges, for up to 24 days.

If the current cyber-libel law can be stretched to rein in and imprison a prominent journalist, how much more can the Anti-Terrorism law muzzle and intimidate the fifth estate?

This bill, in effect, jeopardizes an ordinary citizen’s right to dissent. It suppresses any democratically insured freedom of expression. It suppresses democracy. It will eventually kill it. Something that only 36 responsible members of the House of Representatives fully grasped.  Twenty-nine legislators did abstain, but 168 voted affirmatively, focusing on the legitimate need to counteract terrorism and threats of terrorism through “political, economic, diplomatic, military, and legal” means but showing little or no concern for the significant potential for abuse and the demise of constitutionally protected rights.

The Anti-Terrorism Act of 2020, like the failed war on drugs, is another knee-jerk strategy that will cause more harm than good. When will the government put its resources instead into health, sanitation, nutrition, education, job training, livelihood opportunities, the alleviation and eradication of poverty — common-sense strategies that will surely carry the nation forward?