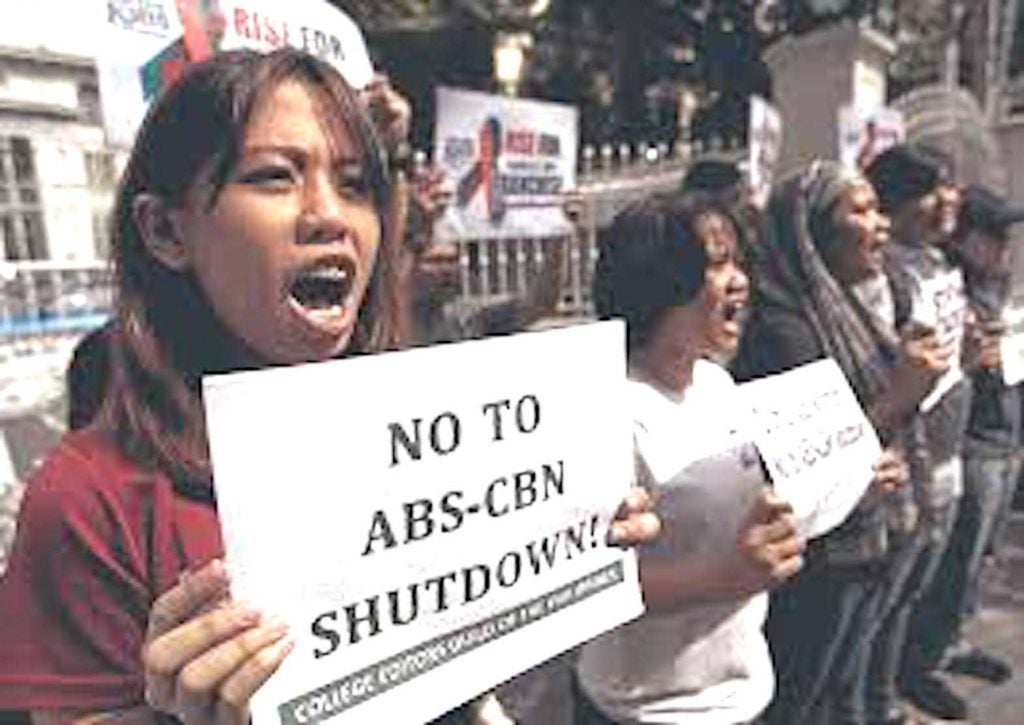 A bully in power tries to silence anybody who dares fight back. We’ve been through this before.

The most obvious comparison to the Duterte government’s arrogant decision to force ABS-CBN off the air was when the same thing happened at the dawn of the Marcos dictatorship nearly 50 years ago.

And we know how that story ended. It took 14 years, but eventually Filipinos, tired of the corruption and the abuse, rose up to kick the tyrant out.

And there are many more examples of people in power — dictators, colonizers, invaders, thugs, tyrants — that tried to keep Filipinos down and failed.

Some of our national heroes had to deal with the conquistadors who deemed us inferior and incapable of self-rule. They wrote novels, poems, plays, essays published hard-hitting newspapers and newsletters to resist the colonizers. Some of them were put to death for daring to resist.

When the repression intensified and became more brutal, we became creative.

When we were a colony of the United States, the playwright Aurelio Tolentino used the theater to protest American rule. During the Marcos regime, my friend, the poet and journalist Pete Lacaba, hit back at the tyrant through poetry.

Embedded in Pete’s poem “Prometheus Unbound,” published in Focus magazine in 1973, under a pseudonym Ruben Cuevas, was a hidden message denouncing Marcos as a new Hitler.

There were other acts of courage during the years. This was impressive and inspiring given the absolute control the dictatorship had over the media. During the Marcos years, TV news and newspapers reported only what the dictatorship wanted the people to hear.

But that didn’t stop campus newspapers from hitting back. On the UP Diliman campus, the Philippine Collegian led by the young, defiant editor Ditto Sarmiento, became a lonely voice of protest against the Marcos tyranny. He and his editors were jailed. Sarmiento died after a bruising stint  in a Marcos prison.

Eventually, the wave of journalism that dared defy the dictatorship spread beyond the campuses.

In 1982, Marcos ordered his military to shut down WeForum, a small newspaper that had the guts to expose his lies, including his bogus claims about being a war hero in World War II.

I was 18 when I covered the hearing of the WeForum staff, led by editor Joe Burgos. In a small, crowded courtroom in Quezon City, the feisty reporters, editors and columnists, and  their gutsy team of attorneys, including Rene Saguisag, faced off with the dictatorship’s bumbling defenders.

This was still the height of martial law, when Marcos’s military routinely jailed, tortured and murdered opponents. But that day, as a young campus journalist, I witnessed courage under dictatorship.

I remember one prosecution witness, a military officer, who said something like, ‘How dare these writers speak out against the president.’

At one point, Saguisag lambasted the presence of military men in the courtroom. The judge cited and fined him 50 pesos.

“I’ll gladly pay it,” Saguisag responded, pulling out a hundred-peso bill from his wallet. Unable to resist another act of defiance, he added: “Can I say something more for another fifty pesos.”

Four years after that courtroom encounter, Marcos was gone. Filipinos threw the dictator out of the country.

That is what we need to remember as Duterte, the thug-leader who inspired mass killings, who has repeatedly shown a disdain for the rights of women, the poor, and anyone who dares defy him, as this new Marcos tries to pull another Marcos by shutting down a media outlet.

Critics of ABS CBN and Duterte supporters portray the shutdown as a battle against an oligarchical family.

“The Filipinos do not really need ABS-CBN,” National Artist F. Sionil Jose wrote on Facebook . “It does not produce goods or food. It has certainly entertained millions but it did not diminish poverty. Again, freedom worked for the rich—but not for the Filipinos.”

Media ownership by elites has long been a problem in Philppine journalism. Filipino journalists have been taking on this issue for decades. It’s what led to the rise of independent journalism organizations, such as PCIJ, Rappler, Vera Files and the Center for Media Freedom and Responsibility.

But only a blind person or a fool would believe that shutting down ABS CBN is about Duterte wanting to take on the rich because he cares about the Filipino masses. Duterte clearly went after ABS CBN because it refused to embrace his murderous policies. It’s not because he’s against oligarchy — it’s because he prefers oligarchs who play along, who would obey.

Isn’t it clear that Duterte is eager for another oligarch to take over ABS CBN? “Itong ABS, mag-expire ang contract ninyo. Magrenew kayo, ewan ko lang kung may mangyari diyan. Kung ako sa inyo, ipagbili ‘nyo na ‘yan (ABS-CBN, your contract will expire. You want to renew, but I don’t know if that will happen. If I were you, I’d sell it),” Duterte has said.

Jose’s comment is an insult to the veteran and committed journalists of ABS-CBN like Ging Reyes, and to the other journalists who have been under fire in the Duterte era, including Maria Ressa and the Rappler team.

But again, we’ve been here before. Thugs and tyrants have tried to silence Filipinos, particularly journalists, in the past.