Cardinal Tagle in the Vatican -- service not power

Cardinal Tagle in the Vatican — service not power 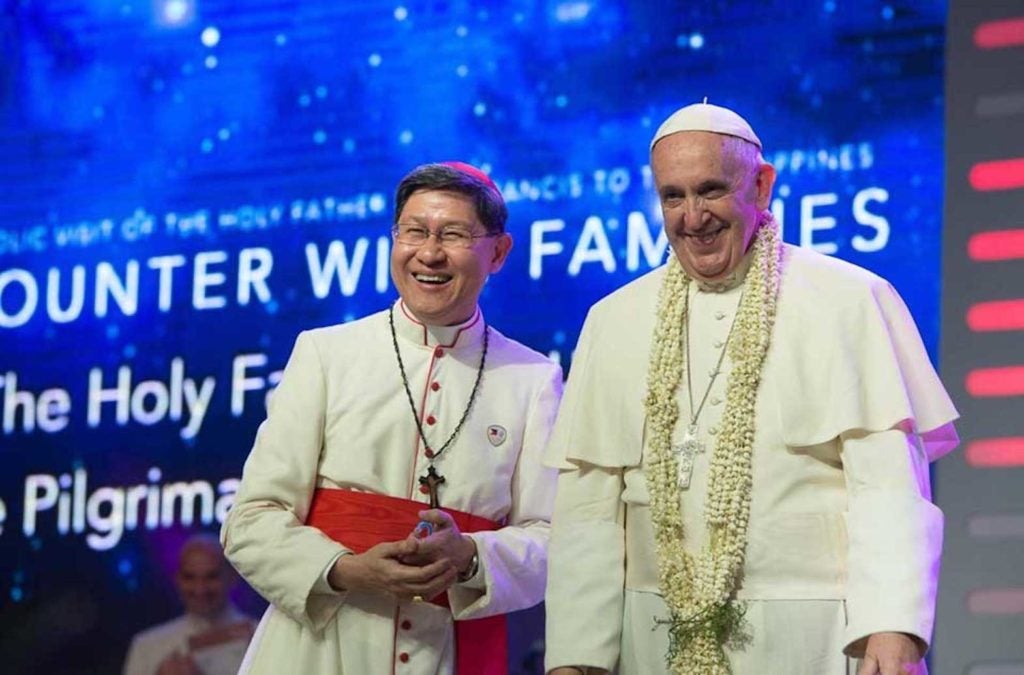 He was tearful. He didn’t want to go, but obedience made him do so. There’s no denying there are ultraconservatives and its opposites in the Vatican, once called “God’s headquarters on Earth.” Neither can anyone ignore that there’s politics inside “the oldest functioning bureaucracy in the world.” But when I heard someone say that Cardinal Tagle’s enlarged influence and new promotion made him the second or third most powerful prelate in Rome, I laughed.

For friends who know him up close and personal, Filipino Cardinal Luis Antonio Tagle did not accept Rome’s assignment to become stronger and mightier. He did not accept being Cardinal-Bishop to be better than the old-timers. In Rome, only the Pope is primus inter pares, “the first among equals.”

The conclave of 2013 that elected Pope Francis took place “in one of the lowest moments in the reputation of the Roman Curia.” Ecclesia semper reformanda! And in his attempt to overhaul what appears to be an immovable bureaucracy, the Argentinian Successor of the Galilean Peter is seen to expose a culture within the Vatican, in the words of Catholic journalist Sandro Magister, of “very self-enclosed groups of bureaucrats who seek to protect their power and resist attempts to make them accountable.” By now, we know that the Holy Father will do anything to reform it until Hell freezes over.

Himself living a life of the servant of the servants of God, servus servorum Dei, Pope Francis made sure that others who walk along the Vatican corridors of power understood that they were made cardinals to serve, not to be served. Guess who goes around helping migrants, personally fixing utilities for them, and receiving donations for the hospitals. It’s the Pope’s almoner, His Eminence Konrad Krajewski, a cardinal!

Brilliant as he is, Cardinal Tagle is cognizant of the popular adage “He who enters the Conclave a Pope leaves it a Cardinal.” While instant Vaticanologists say that his new promotion enhances his secured chances as a papabile, Cardinal Tagle ATM rolls his sleeves and burdens himself with all sorts of alay-kapwa, both relief-giving and life-saving operations, as he performs his duties as the President of Caritas Internationalis.

While one political leader thinks of it as punishment, others say his appointment as prefect of the Congregation for the Evangelization of Peoples, might morph into a super dicastery more powerful than the Congregation for the Doctrine of the Faith, which Pope Emeritus Benedict XVI used to head. Those ideas are quite insensitive at this time, to say the least, when Covid-19 has closed church doors everywhere, forcing Cardinal Tagle and others in Rome to reevaluate their next moves in reaching out to more people in non-Christian nations and difficult situations.

“The bishop of the Church is a humble and meek servant, not a prince,” Pope Francis was candid to say (November 2018). And when the hierarchy is predisposed to the disappearance of servanthood, the Church is forewarned by the Holy Father that clericalism can easily turn the sacred office into “authoritarian elitism” (Evangelii Gaudium, 94).

Evitate lo scandalo di essere “Vescovi di aeroporto!” Pope Francis urge all his deputies and lieutenants, to walk and stay in the midst of the flock, like Jesus the Good Shepherd, to be always present in the diocese, and “steer clear of the scandal of being ‘airport bishops.’” All Pope Francis wants to see is a “poor Church for the poor” and an accessible “field hospital after battle… able to heal wounds and to warm the hearts of the faithful.”

At one dramatic moment of Vatican II (third session, 1964), when Cardinal Ottaviani moved for the reinforcement of monarchical model of the Church, Belgian Bishop Emil de Smedt of Bruges rose to speak and said: “Shouldn’t this schema be purged of its triumphalism, its clericalism, its legalism? This exercise in minor logic is unworthy of Mother Church.”

Vatican II has rejected the model of the Church as a pyramid with the hierarchy at the top and at the bottom are laymen and women who occupy the inferior and secondary places (Lumen Gentium, 32). The hierarchy is a divine intervention needed for governance but should not, in any way, at least in the minds of the new cardinals created by Pope Francis, imply greater power than other’s. Being a priest or a bishop is something beautiful, but it’s not meant for itself. Fundamentally, the Catholic hierarchy is meant to serve God’s faithful people.

Serviam, as the late Cardinal Sin used to say.

Jose Mario Bautista Maximiano (facebook.com/josemario.maximiano) is the author of THE SIGNS OF THE TIMES AND THE SOCIAL DOCTRINE OF THE CHURCH (Salesiana, 1991) and THE CHURCH CAN HANDLE THE TRUTH (Claretian, 2017).