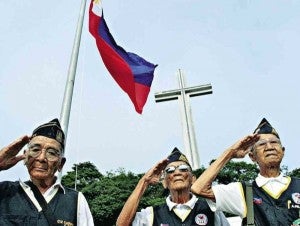 The new law awards Filipino veterans a Congressional Gold Medal, the highest expression of national appreciation for distinguished achievements and contributions in the United States, collectively, to 260,000 Filipino veterans in recognition of their dedicated service during World War II.

The House of Representatives unanimously approved a counterpart bill on Nov. 30. The Senate version (Senate Bill No. 1555) was sponsored by the following Senators:

The House version (H.R.2737) was sponsored by the following Representatives:

“We welcome this terrific news and extend our appreciation anew to all the advocates and supporters of the bill at the US House of Representatives and the Senate,” said Minister Patrick Chuasoto, Chargé d’Affaires ad interim of the Philippine Embassy, in a statement.

The Philippine Consulates General and Filipino communities across the United States, the National Federation of Filipino American Associations (NaFFAA) and the Filipino Veterans Recognition and Education Project (FILVETREP) campaigned for the success of this joint campaign.