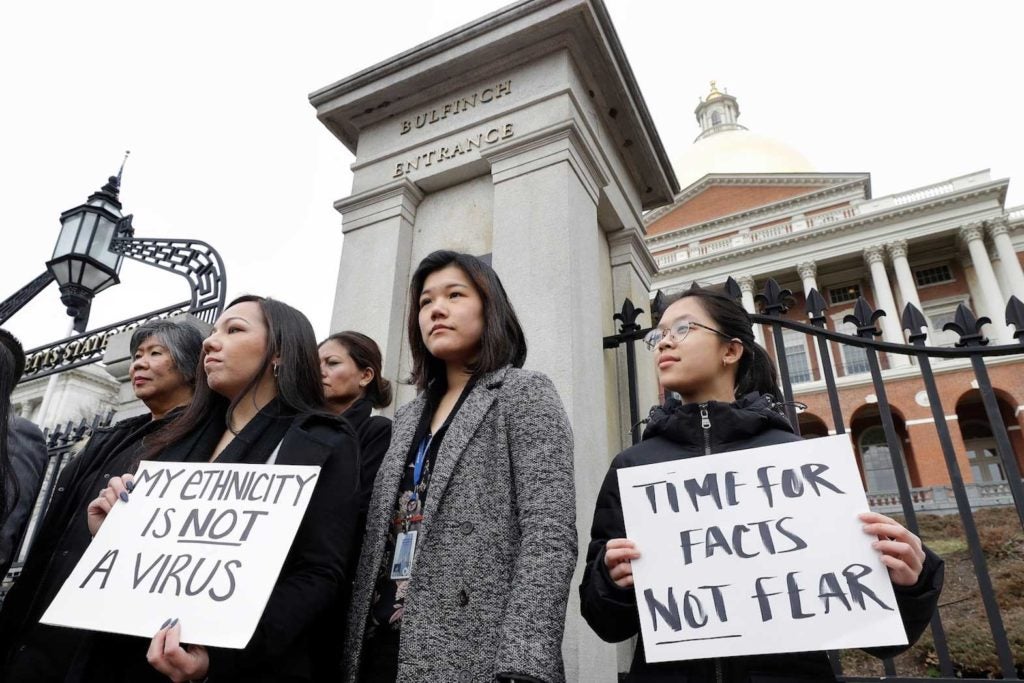 I wish it were an April Fool’s joke, like everything else last month.

But with Trump this week extending his initial “we’ll see what happens” period beyond 15 days to the end of April, what prudent state official wouldn’t look at Trump’s slow response record and just assume his timeline is going to be a little off?

That’s what Virginia Governor Ralph Northam did. Forget the end of April. Northam has ordered people to stay at home until June 10.

A casualty of our Covid-19 times.

Other governors may consider waiting, but can anyone blame Northam for extending the stay-at-home period to June and essentially canceling May?

Three years ago during APA Heritage Month, I gave a speech on diversity and Asian Americans at the National Guard headquarters in Virginia.

This year, it looks like the National Guard may be busy helping to distribute food.

So it will be Asian Pacific American Heritage Month in Virginia in name only, or it will be virtual if it takes place at all. In 2020, it’s stay home and celebrate with your own lumpia, spring rolls, and dumplings.

More than good social distancing, it may be self-preservation.

Here’s another part of the new Asian American reality. And make no mistake that includes Filipinos.

If you venture out, you may get spat on, beaten up, or harassed—especially if you’re an Asian American woman.

And then he gussied it up with political boilerplate on what a proud people Asian Americans are. An honor to be specifically gaslighted by the gaslighter-in-chief? So much for presidential uplift.

But if you heard my  podcast on anti-Asian violence, then you know there’s more than one curve we should all be trying to flatten.

Reducing the numbers of Covid-19 victims is one thing. The latest stats show Spain, Italy, and China flattening the curve—but the U.S. numbers continue to spike. Yes, we should fight that by staying home. The president seemed somber when he talked about the number of possible deaths: the next two months could go from a best case scenario of 100,000-240,000 deaths, to a worst case of a million or more.

In two months. Scary numbers for all.

But Asian Americans have an additional reason to be worried.

The other disturbing curve is the rise in anti-Asian violence across the nation, committed by people still under the influence of Trump’s “Chinese Virus.”

Since March 19, the numbers reported to the Stop AAPI Hate website have grown by 100 cases a day and now have exceeded 1,000 cases, researcher Russell Jeung, a San Francisco State University professor in Asian American Studies, told me this week.

More than 100 cases a day? That curve is far from flattening.

The whole thing infuriates a Japanese American in New York City–I’ll call her Akira to protect her identity.

She wants an apology from the president. She blames him for what happened to her.

She was shopping around the Washington Square Park area on March 18, around the time Trump was tweeting and referring to Covid-19 as the “Chinese virus.”

She was also wearing a mask, what to many seems to be the international signifier of Asian-ness.

“Whether you are sick or not, Asians wear the mask,” said Akira, who told me she does not have the virus.

But while walking home with her groceries, she was approached by a large white male who she said looked like a construction worker in his mid-40s.

“He was a tall huge guy,” Akira said. “He walked rapidly toward me and pushed me down. I was like ‘What?!’ I was so shocked.”

Akira fell and broke her pinky finger. She reported the incident to the police, but so far nothing has been done.

Since then, she has learned about at least three incidents in her personal circle of friends: two Chinese students and a Chinese woman on the Upper West Side who were accosted by young people blaming them for spreading the virus.

The fact that Akira is Japanese American and not Chinese doesn’t really matter. Sixty-one percent of incidents reported to the Stop AAPI Hate website are non-Chinese.

“I was just carrying groceries and I was wearing the mask,” she said.

Akira, born and raised in Japan and a New Yorker since the ‘70s, said she normally wears a mask to protect herself from dust and allergens. She also doesn’t want to spread anything she has to others.

The debate has now begun as some health experts say that in addition to social distancing and vigorous hand washing, a mask–though imperfect–may provide an added layer of protection.

Asian Americans like Akira already know that wearing them makes us a target, especially entering a period when the impacts of the virus are expected to worsen.

No apology from Trump

Akira and other Asian Americans shouldn’t hold their breath for an apology from Trump for his statements–not when the country can’t get him to acknowledge how his delayed reaction to the virus threat endangered the entire nation.

On Tuesday, Trump talked about the virus not as a “hoax,” as he did in the recent past, but now used the term “plague,” as if he knew Covid-19 was a problem all along.

“Think what would have happened if we didn’t do anything,” Trump actually said, as if imagining he took more vigorous early steps to fight the pandemic.

“I mean, I’ve had many friends, business people, people with common sense, say why don’t we ride it out. A lot of people said, ‘Ride it out. Don’t do anything. Just ride it out and think of it as the flu.’”

Trump could have been talking not about a friend, but himself in the third person as he answered reporters at the briefing. Bizarre? It gets worse.

“But it’s not the flu. It’s vicious,” he continued. “When you send a friend to the hospital and you call up to find out how is he doing, it happened to me, where he goes to the hospital, he says goodbye, sort of a tough guy, a little older, a little heavier than he’d like to be frankly. And you call up the next day, how’s he doing and he’s in a coma. This is not the flu. . .This is not to be ridden out, or you would have been looking at potentially 2.2 million people in a relatively short period of time. If you remember they were looking at that concept, is that a concept, if you don’t mind death, that’s a lot of death.”

Praise him for his common man candor and honesty? Or is it just plain frightening to see him ramble on without regard to truth or fact?

No wonder the TV networks feel free to cut away from the briefing when the president is allowed to rewrite history so freely. Wasn’t that Trump who said it was just the flu? And wasn’t it all just parroted back by the Trump faithful, those in the areas that have been slow to take aggressive stands to shelter-in-place and social distancing as California did more than two weeks ago?

Texas just did it this week. Florida has yet to. Trump isn’t expected to issue a nationwide order, and those states will likely pay the price for going at Trump speed to fight the pandemic.

Dr. Anthony Fauci is the voice of reason at the briefings. And he is preparing us for the worse. Keep your social distancing. It’s the best defense we have to flatten all the curves that need to be flattened.

“Now is the time not to take the foot off the accelerator,” said Fauci. “It’s inconvenient, but this is the answer to our problems.”

If we don’t, 100,000 deaths in the next two months is the best case scenario. And the worst case? A million or more?

If that happens, the national anthem will be replaced by Albinoni – Giazotto Adagio.

And we’ll all be too busy burying the dead to celebrate Asian Pacific American Heritage Month.

Emil Guillermo is a journalist, and all-things commentator. He writes a column for the Inquirer.Net’s North American Bureau. Twitter @emilamok. Listen to his “Emil Amok’s Takeout” on Apple Podcasts.