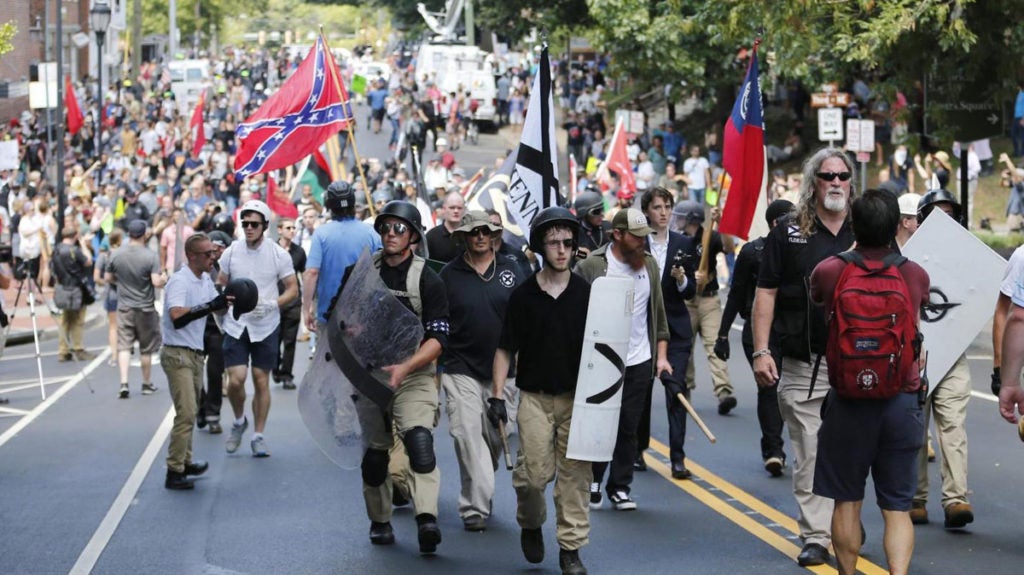 SILVER SPRING, Maryland — A recent surge in white nationalism in the U.S. has led to a growing threat of violence by factions that embrace bloodshed and advocate for a race war, according to a report released Wednesday by an organization that tracks far-right extremists.

Many of these white nationalists are embracing “accelerationism,” a fringe philosophy that promotes mass violence to fuel society’s collapse, the law center said.

“In their view, political activity is pointless, and escalating violence, on a broad scale, is the only way to bring down the pluralistic, democratic society they want to destroy,” its report says.

The Montgomery, Alabama-based law center described another faction of U.S. white nationalism as “mainstreamers,” who often call themselves members of the “dissident right” and are trying to appeal to a wider audience.

“Much of the movement’s energy lies in the growing accelerationist wing, which, for the most part, is organized in informal online communities rather than formal groups,” the report says.

Over the past few months, the FBI has arrested a string of suspects linked to white supremacist groups, including The Base and Atomwaffen Division, that have advocated for violence and a race war. The man accused of attacking two mosques in Christchurch, New Zealand, and killing 51 people in March 2019 devoted a section of his manifesto to the concept of accelerationism.

“There is little to suggest that the violence that has accompanied the surge in white nationalism in recent years will abate,” the report says.

The total number of “hate groups” counted by the law center dropped by about 8%, from a record high of 1,020 in 2018 to 940 last year. But the law center said the decline “does not reflect a significant diminishment of the radical right” given an increased activity among white nationalist groups.

The law center said Donald Trump’s first presidential campaign energized white nationalists “who saw him as an avatar of their grievances and their anxiety over the country’s demographic changes.” The conspiracy theory that white people are experiencing a “great replacement” by nonwhite populations is the most powerful force driving far-right extremism, according to the law center.

“Trump didn’t create the fear of nonwhite immigrants but rather harnessed it to win the White House in 2016 and continues to nurture it by fanning the flames of resentment within the most extreme elements of the Republican base,” the report says.

White House spokesman Judd Deere said that, while the administration hasn’t seen the law center’s report, “President Trump has repeatedly condemned racism, bigotry, and violence of all forms and his policies have reduced violent crime and made communities safer.” Deere also said the law center is a “far-left smear organization that only wants to libel, slander, and defame this president with its lies.”

“Their comments are disgusting, particularly while the president demonstrates unprecedented leadership to contain and mitigate the spread of COVID-19,” Deere said in an email.

A federal judge in Washington, D.C., dismissed a lawsuit that accused law center leaders of trying to financially destroy one of the organizations that it has labeled as a hate group, the Center for Immigration Studies. A federal judge in Virginia ruled that the First Amendment protected a charity tracking website’s use of the law center’s hate group labels.

In 2018, however, the law center apologized to a London-based group, Quilliam, and its founder, Maajid Nawaz, and agreed to pay $3.4 million in an out-of-court settlement after labeling them as anti-Muslim extremists.

The law center defines a hate group as an organization that “has beliefs or practices that attack or malign an entire class of people, typically for their immutable characteristics” and vilifies others because of their race, religion, ethnicity, sexual orientation or gender identity.