Ex-aide of Imelda Marcos is New York’s No. 2 tax cheat 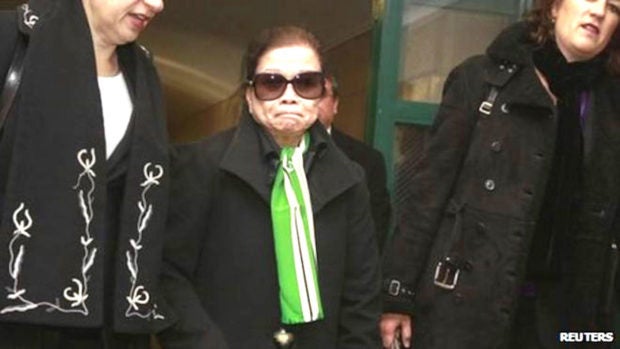 Vilma Bautista, former aide of Imelda Marcos, stole a Manet painting from her, sold it for $32 million and was convicted of tax fraud. REUTERS PHOTO

NEW YORK – A former aide of Philippine ex-first lady Imelda Marcos is New York state’s No. 2 most delinquent taxpayer according to public records.

Vilma Bautista, 81, owes $14,281,977.75 in taxes, according to records released by state Department of Taxation and Finance, a New York Post report said.

Bautista’s tax woes stem from her theft and sale of Claude Monet’s 1899 work “Water-Lily Pond” and three other pieces from Marcos’ Upper East Side townhouse in 1985.

Bautista sold “Water-Lily Pond Bautista was convicted of tax fraud over the illegal sale of a Monet painting she had stolen from Marcos,

Although sentenced in 2014, she didn’t begin serving her prison term at Bedford Hills Correctional Facility in Westchester until December 2017.

She served nearly two years before being paroled last December.

Ahead of Bautista, at No. 1  on the state’s list of top 250 delinquent taxpayers, is Gene Friedman, “New York’s Taxi King,” who owes over $18.6 million, reported the NY Post.