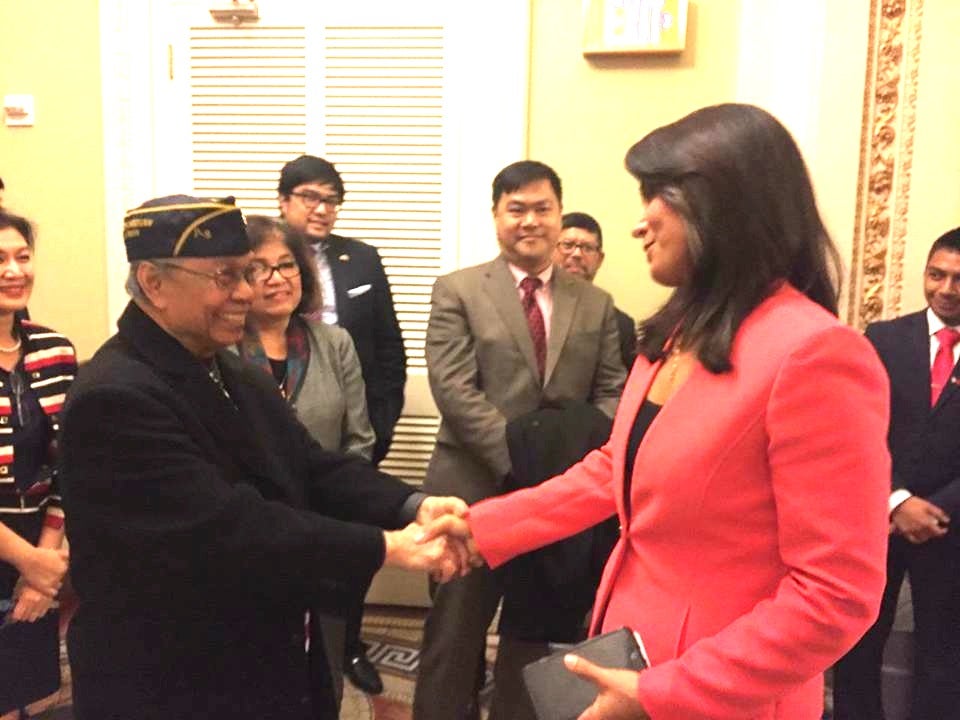 WASHINGTON, DC — Plans are under way for a national celebration honoring Filipino World War II veterans, whose service and sacrifice have been finally recognized by the U.S. government with legislation passed last year.

The Congressional Gold Medal (CGM) is one of the highest civilian awards bestowed by the United States for persons or groups who have performed an achievement that have had an impact on American history and culture.  American citizenship is not a requirement for the award.

In particular, this CGM award is a public expression of the U.S. Congress’ gratitude on behalf of the nation for the distinguished contributions of 260,000 Filipino soldiers and guerrillas during World War II in the Philippines.

Traditionally, the CGM is formally presented to the awardees by the Speaker of the House.  This year, the national celebration coincides with the formal award presentation by House Speaker Paul Ryan. The presentation has not been scheduled, but could be held as early as October or November this year.

At the award ceremony, slated for Capitol Hill, surviving Filipino and American veterans or their next-of-kin will receive bronze replicas of the CGM and a framed copy of Public Law 114-265.

The Filipino Veterans Recognition and Education Project (FilVetREP), the proponent of the CGM legislation and the official national point of contact for all CGM activities, is working closely with the US Mint and the offices of Sen. Mazie Hirono (D-HI) and Rep. Tulsi Gabbard (D-HI) to speed up completion of the minting and production of at least 500 bronze replicas.

“We secured the Congressional Gold Medal to honor our veterans and demonstrate our deepest gratitude for their supreme sacrifice,” said FilVetREP Chairman Taguba. “We will ensure that our national celebration of this historic achievement is one that treats our veterans with the utmost dignity and respect. We are, therefore, calling on all our supporters to make this important event happen. It’s for our veterans and they deserve to have a memorable event.”

Not all recipients of the medal may be able to come to Washington due to their age and physical condition. Regional award ceremonies are being considered in the West Coast, Midwest and the South to accommodate veterans who are not able to travel to Washington.

There are also plans for Filipino veterans residing in the Philippines to receive their bronze replicas in Manila.  This most likely will be handled by the Philippine Veterans Administration Office (PVAO) and Philippine Office of National Defense.

Bronze replicas will be awarded only to surviving veterans or their next-of-kin whose eligibility for CGM has been vetted and whose names are included in FilVetREP’s national veterans registry.

“It is essential that veterans and their families register as soon as possible to make sure they are included in the award ceremony,” Taguba adds.

Applications and instructions for submission may be downloaded from FilVetREP’s website, www.filvetrep.org. Each of the FILVETREP regional directors is responsible for contacting the veterans and families to help them register.

Bronze replicas are not funded by the US government, but rather by donations from the public.  Donations to support FilVetREP’s CGM activities are accepted through the FilVetREP website.

In the past several months, FilVetREP has been meeting with the US Mint’s Office of Design Management in providing significant input and recommendations to the Citizens Coinage Advisory Committee (CCAC) and the Commission on Fine Arts (CFA).

The US Mint is the nation’s sole manufacturer of legal tender coinage, commemorative coins and congressional gold medals, and is responsible for producing circulating coinage for the nation to conduct its trade and commerce.

Currently, the plan is for the CGM to be permanently housed at the Smithsonian’s National Museum of American History or another national museum of similar repute.

The next phase of the CGM project is a digital exhibition and education program that will be accessible to public schools and the general public. It will include a complete history of the Filipino veterans’ role in World War II, timelines, testimonies, personal stories, photographs, videos and other artifacts.

“This American story of Filipino soldiers fighting under the U.S. flag in Bataan, Corregidor and other places, and helping liberate a U.S. sovereign territory only to be denied the benefits promised them, must be told widely and preserved for posterity for generations to come,” Taguba said.

“It is a story we all should be proud of.”