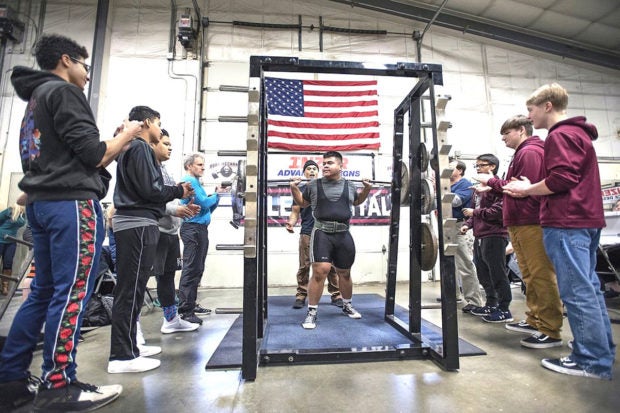 KETCHIKAN, Alaska — Jaredval Caguiat had nothing more than a power bar for breakfast on Saturday.

He was running late.

Caguiat could be all smiles now, of course.

Just a month removed from his 17th birthday, the teenager had just achieved a feat at the 19th Annual Ketchikan Winter Powerlifting Competition on December 7 that no one his age in the state had done before.

With six 45-pound plates lined up on each side of a 45-pound bar, along with a few smaller weights, Caguiat’s final squat totaled 615 pounds.

And that also was enough to eclipse the last state squatting record by a powerlifter in his 264-pound weight class, as well as his age bracket.

“He’s a raw lifter. He just works single lift — a lot of squatting, a lot of deadlifting,” Caguiat’s coach Kevin Manabat said. “He’s in (the gym) about an hour and a half, four or five days a week.”

“He had a 10-pound bench press PR, and ended up with a 50-pound deadlift PR,” Manabat said.

And including Caguiat’s record-setting squat, six state records were broken.

David McLavey also broke a state squatting record. He moved 650 pounds in the event, which was a new mark for his weight and age bracket.

McLavey also is in the 264-pound weight class, along with Caguiat, but he is six years older.

“From what he did last year to now is dramatic,” McLavey said of Caguiat. “Last year, he was hitting in the mid-400s in the squat and dead(lift). Now he hit something over 600 on the squat, and right there in the 500 pounds in the deads. He has grown substantially since last year. He’s got a long ways to go, too. He’s quite impressive.”

His powerlifting total, which adds the best round in each category, also was a state record, combining for 1,665 pounds.