Trump Lashes out at Magazine That Called for His Removal

US President Donald Trump lashed out on Friday at a leading evangelical Christian publication after it branded him morally unfit to remain in the White House.

Trump, in a series of tweets, accused Christianity Today magazine of being “far-left” and claimed he was the best ally evangelicals have ever had as president.

It’s not just the crimes related to Ukraine. The president may have personally committed up to eight criminal campaign finance and related offenses while running for president and during his first year in office. https://t.co/gvM99107yI

He said Christianity Today “would rather have a Radical Left nonbeliever, who wants to take your religion & your guns, than Donald Trump as your President.”

In an editorial on Thursday, a day after Trump was impeached by the House of Representatives, Christianity Today said it was “necessary from time to time to make our own opinions on political matters clear.”

“The facts in this instance are unambiguous,” it said in a reference to Trump’s bid to obtain political dirt from Ukraine on his potential 2020 election rival, Democrat Joe Biden.

“The president of the United States attempted to use his political power to coerce a foreign leader to harass and discredit one of the president’s political opponents,” the magazine said.

“That is not only a violation of the Constitution; more importantly, it is profoundly immoral.”

Christianity Today was founded by Billy Graham, a prominent Christian evangelist who died last year, but the Graham family is no longer associated with the publication.

WAYNE ALLYN ROOT: Why Trump is the Most “presidential” President Ever https://t.co/gtt85CpvMf via @gatewaypundit

“Yes, my father Billy Graham founded Christianity Today; but no, he would not agree with their opinion piece,” Graham said in a Facebook post. “In fact, he would be very disappointed.

“For Christianity Today to side with the Democrat Party in a totally partisan attack on the President of the United States is unfathomable,” Graham said. “It’s obvious that Christianity Today has moved to the left and is representing the elitist liberal wing of evangelicalism.”

Trump tweeted his thanks to Graham for his support and “the work we have all done together!”

Another prominent evangelical leader, Jerry Falwell Jr, issued a series of tweets in support of Trump.

Mark Galli, editor-in-chief of Christianity Today, which has a circulation of 130,000, rejected the president’s assertion the magazine was “far left.”

“We consider ourselves, and most people consider us, a pretty centrist magazine in the evangelical world,” Galli told CNN. 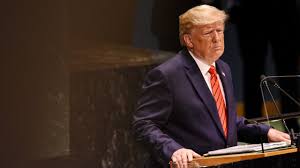 Christianity Today said Trump “has admitted to immoral actions in business and his relationship with women, about which he remains proud.

“His Twitter feed alone — with its habitual string of mischaracterizations, lies, and slanders — is a near-perfect example of a human being who is morally lost and confused,” it said.

The magazine said “Trump’s evangelical supporters have pointed to his Supreme Court nominees, his defense of religious liberty, and his stewardship of the economy, among other things, as achievements that justify their support.

“We believe the impeachment hearings have made it absolutely clear… that President Trump has abused his authority for personal gain and betrayed his constitutional oath.”

“Can we say with a straight face that abortion is a great evil that cannot be tolerated and, with the same straight face, says that the bent and broken character of our nation’s leader doesn’t really matter in the end?

“Whether Mr. Trump should be removed from office by the Senate or by popular vote next election — that is a matter of prudential judgment,” the magazine said.

“That he should be removed, we believe, is not a matter of partisan loyalties but loyalty to the Creator of the Ten Commandments.”

Trump has enjoyed solid support from white evangelical Christians although a Fox News poll in October found that those backing him had slipped from 81 percent in the 2016 election to around 70 percent now.